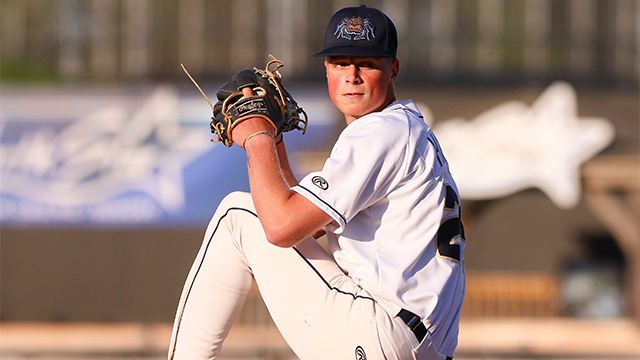 As the St.Cloud Rox swept the Bismarck Larks they received their ninth win of the season and are the only team that remains undefeated. The Wisconsin Rapids Rafters also stay hot and win their ninth game in a row to advance their record to 9-1. Thursday’s games consisted of 4 series sweeps.

For their first seven inning game of the night, the Battle Creek Battle Jacks defeat the Kokomo Jackrabbits 8-3. Down by two runs going into the bottom of the fourth inning Fisher Pyatt (San Diego State University) crushed a grand slam to give his team their final runs of the game. The offense also had three doubles from Bobby Nichols (Central Methodist University), Patrick Mills (Indiana University Kokomo) and Joey Grabanski (Concordia University Nebraska) to score runs.

The Traverse City Pit Spitters won the series against the Kalamazoo Growler 6-4. Jake Smallwood (University of Montevallo) led his team with three singles and 1 RBI. With a tied game 4-4 going into the bottom of the seventh inning with bases loaded Lukas White (Doane University) and Brendan Summerhill (University of Arizona) both advanced to first on walks and scored the go ahead runs of the game. Summerhill went 2 for 3 on the night.

For their second seven inning game of the night the Kokomo Jackrabbits split the series with the Battle Creek Battle Jacks 4-2. Matt Aribal  (University of Hawaii) led the team with two hits and an RBI. Alex Neff (University of Dayton) started the third inning off with a double to left field to score the first run of the inning. Neff had one hit and one walk.

The Rockford Rivets win game two of the series against the Kenosha Kingfish 1-0. Kyle Seebach (Northern Illinois University) started the night on the mound throwing a scoreless seven innings with six strikeouts and giving  up only two hits. The Rivets scored their winning run in the eighth inning with bases loaded and Matthew Mebane (South Georgia State College) up to bat. Mebane advanced to first on a fielder’s choice, scoring their only run.

The Wisconsin Rapids Rafters swept the Wausau Woodchucks in a 9-7 victory. Ben Ross (Notre Dame College) went 3 for 5 at the plate with a double to start off the explosive third inning. Jacob Igwa (University of Hawaii) also had three hits including a single to score Ross in the third. Garrett Broussard (Utah Valley University) had three hits as well with a double, 2 RBI and a back to back single with Igwa to score another run in the third inning.

To split the series the Eau Claire Express won game two against the Minnesota Mud Puppies 6-3. The Express scored their first two runs of the game in the third inning with an RBI single by Peter Brookshaw (North Dakota State University) and an RBI double by Cole Conn (University of Illinois at Chicago). Conn had one hit, two RBI and three walks. Kevin Tuttle (Alma College) led his team with two hits and scored each time he reached base. Trey Felker (University of Montevallo) had the win on the mound throwing six innings with six strikeouts.

The Madison Mallards defeat the Lakeshore Chinooks 5-3 to split the series. Jan Rollon (Southern University and A&M College) started the game off with a single and went 2 for 3 with 1 RBI. Josh Caron (University of Nebraska) reached base four times with two hits and two walks. The Mallards scored their most runs in the fifth inning starting with an RBI single by J.T Mabry (Middle Tennessee State University). The pitching staff allowed only three runs to score and combined for a total of 10 strikeouts.

In a thrilling victory the Rochester Honkers take game two against the Mankato MoonDogs 8-7. Down by two runs going into the bottom of the eighth the Honkers capitalized on the MoonDogs errors scoring their final three runs to put them ahead. Nico Regino (San Joaquin Delta College) went 2 for 3 with two doubles and 1 RBI. Nate Chester (John A. Logan Community College) and Michael Carico (Davidson College) both had doubles along with an RBI each.

The Duluth Huskies swept the Waterloo Bucks in a 8-3 victory. Devin Hurdled (University Nebraska Omaha) earned Northwoods League Player of the Night after going 3 for 4 at the plate with a triple, two RBI and two stolen bases. With bases loaded and Michael Sarhatt (Skyline College) up to bat he drove a single to center field to score three runs and clear the bases. Noah Marcelo (Arizona Western College) had two singles, two RBI, one stolen base and scored each time he reached base.

The Fond du Lac Dock Spiders split the series with the Green Bay Rockers 7-1. David Hagaman (West Virginia University) had the win on the mound, throwing the first five innings with eight strikeouts, giving up only two hits and zero runs to score. Hagaman earned Northwoods League Pitcher of the Night with his outstanding performance. Nick Mitchell (Western Illinois University) led his team with two hits including a single, double and one RBI.

The St.Cloud Rox stay undefeated as they take down the Bismarck Larks 3-1. The Rox scored their three runs in the bottom of the seventh with a sac fly by Trevor Austin (Mercer University) and a single by Ethan Mann (New Mexico State University). Albert Choi (New Jersey Institute of Technology) led his team with three hits including two singles and a double. Nathan Culley (Minnesota State University, Mankato) had his second win of the season on the mound throwing 6.2 innings with five strikeouts.

The Willmar Stingers split the series as they defeated the La Crosse Loggers 6-1. Ryan Jares (Augustana University) threw a scoreless six inning with seven strikeouts and had his first win on the mound of the season. The Stingers scored first in the fifth inning on an RBI single by Tim Pokornowski (University of Minnesota-Duluth) and a sac fly by Brett Bateman (University of Minnesota). The Stingers also scored in the next three innings to add insurance runs.