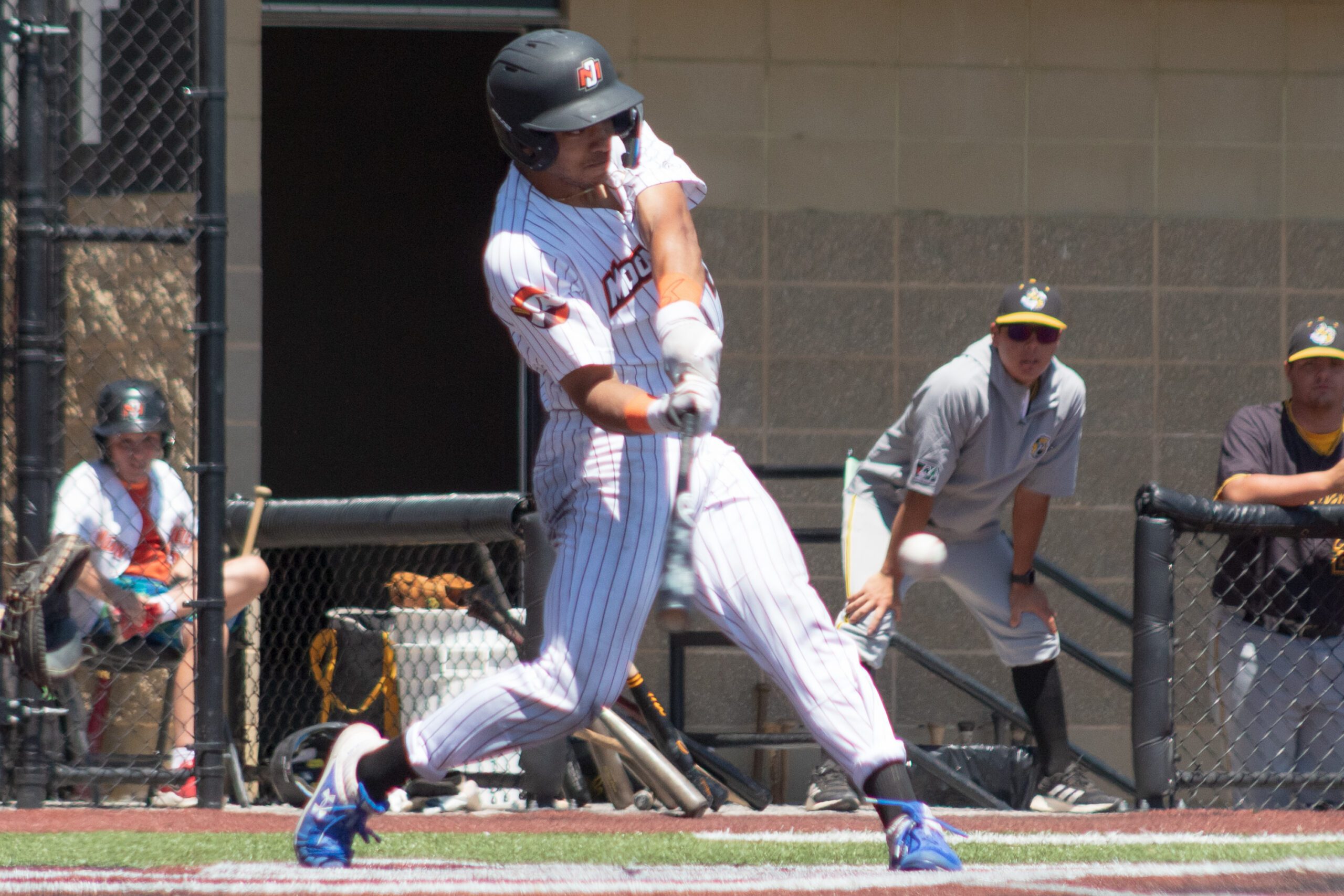 With a packed fun filled day of 19 Northwoods League Games eight teams completed double headers. The Waterloo Bucks and the La Crosse Loggers swept both of their games today with the Loggers winning their 5th game in a row putting them back in the win column.

The Eau Claire Express defeated the Duluth Huskies 8-7 in a 10 inning game. The Express rallied their way back in the seventh inning to score five runs starting with a home run by Peter Brookshaw (North Dakota State University) to score two runs. Followed by an RBI double by Sam Kuchinski (University of Montevallo). Brookshaw had two hits with three RBI. The Express scored their final run on a fielder’s choice hit by Brookshaw.

The Wausau Woodchucks rallied to take the win against the Wisconsin Rapids Rafters 6-5. Trailing by four runs heading into the top of the seventh inning, Cal Hejza (University of Illinois) blasted the ball over the left field fence for a grand slam to tie the game. The Woodchucks scored their final run in the top of the eight with a sac fly by Ryan Sepede (Brigham Young University). Hejza had two hits with five RBI. Hunter Dorraugh (San Jose State University) had two hits and scored each time he reached base.

In an offensive surge the Lakeshore Chinooks defeated the Green Bay Rockers 17-11. Jack Firestone led his two with a double and a home run with four RBI. Matthias Haas (Cal Poly) and Matthew Deprey (Xavier University) both had two hits with a home run and three RBI. The Chinooks won with the long ball driving home runs in three consecutive innings. Johnny Czeslawski (University of Illinois) started the game for the Chinooks throwing 4 innings with four strikeouts.

The Fond du Lac Dock Spiders generated 14 hits to take the win against the Madison Mallards 15-2. The Spiders struck early, scoring twelve runs before the fifth inning. Alejandro Macario (Nova Southeastern University) led his team with two singles a double and five RBI. Evan Stone (University of South Carolina) had two hits and reached first on a hit by pitch and scored all three times he reached base. The team combined for three doubles and two stolen bases on the night.

The Rochester Honkers rally back to take down the St.Cloud Rox 13-11. Behind by two runs heading into the bottom of the ninth Michael Carico (Davidson College) blasted a grand slam to walk off the game for his first hit of the night. Kevin Dowdell (West Virginia University) also had a big contribution to the game going 2 for 4 with a double, home run and five RBI.

The Waterloo Bucks defeated the Bismarck Larks in a 5-4 rally win. Cameron Cromer (University of Northern Colorado) led his team with two singles, a double and scored twice as he reached base. Tai Walton (University of Hawaii) had a home run and a triple in the eighth inning scoring the final run of the game. Walton overall had three RBI. Owen Puk (Florida International University)  had the start on the mound throwing three innings with four strikeouts.

The La Crosse Loggers had an explosive offense to take down the Minnesota Mud Puppies 19-3. The team combined for 21 hits with Dylan King (University of North Carolina at Chapel Hill) who had four of those hits. King had a double and home run to score three runs. Coby Morales (University of Washington) also had a double and home run with three hits on the night and four RBI overall. The team generated six doubles and five home runs for the first game of the night.

For their 10th win of the season the Mankato MoonDogs defeated the Willmar Stingers 10-5. The MoonDogs scored four runs in the second inning to take the lead with an RBI single by Kai Roberts (University of Utah) and Garrett Williams (Abilene Christian University). Sean Ross (Indiana State University) led his team with two doubles, a single and four RBI on the night. Duke Benge (United States Air Force Academy) had the win on the mound throwing seven innings with two strikeouts and no walks.

The Kalamazoo Growlers take the win against the Kokomo Jackrabbits 15-5. The Growlers scored the first runs of the game with an RBI single by Devin Obee (Duke University). Obee had two singles with two RBI and one walk. Gabriel Gutierrez (University of Miami) had the only home run of the night in the fourth inning. Anthony Stephen (University of Virginia) had three singles and a walk scoring twice as he reached base. Adam Wheaton (Lamar University) had the win on the mound throwing six scoreless innings with eight strikeouts.

The Wisconsin Rapids Rafters held the Wausau Woodchucks to a 6-1 ball game. The Rafters stayed hot scoring their first five runs in the first inning. Joe Osborn (Doane College) was the RBI leader of the inning with a double to left field to score two runs. Brendan Bobo (California State University, Fullerton) scored the next run in the second inning with an RBI single. James Jacob (University of North Alabama) had his sixth win on the mound throwing two innings allowing only one hit.

The Madison Mallards take the second game of the night with a victory over the Fond du Lac Dock Spiders 12-2. Kade Lancour (University of Wisconsin – Whitewater) had the win on the mound throwing five innings with six strikeouts giving up only two hits and two runs. Liam Moreno (Missouri State University) led the offensive side with four hits including a double, home run and three RBI. Scott Shaw (Rider University) had three hits with one double and four RBI.

The Battle Creek Battle Jacks held the Rockford Rivets to a 3-1 lead after the second inning. The Battle Jacks scored their three runs in the second inning with RBI singles by Dillon Kark (Michigan State University) and Bobby Nichols (Central Methodist University). Keegan Batka (Kellogg Community College) started the game throwing a complete six innings on the mound with six strikeouts and allowed only one run to score.

The La Crosse Loggers walked the game off against the Minnesota Mud Puppies 6-5. Tied heading to the bottom of the ninth with bases loaded Jack Haley (California State University, Fullerton) drew a walk to bring in the final run of the game. Aidan Sweat (University of North Florida) led his team on the offense with two hits including a double and one RBI.

The Stingers received their 10th win of the season after taking down the Mankato MoonDogs 8-5. The Stingers took the lead later in the game with a three run home run by Drey Dirksen (Augustana University)  in the eighth inning. The team tacked on two more in the ninth with a pair of singles by Josh Fitzgerald (Dallas Baptist University) and Joey Walls (University of Nevada, Las Vegas).

In an 11 inning game the Kenosha Kingfish defeated the Traverse City Pit Spitters 10-9. Heading into the bottom of the 11th inning with a runner on second, Josh Leslie (McNeese State University) drove a single to center field bringing in the final run of the game. Parker Stinson (Indiana State University) led the offensive throughout the game with three hits including a double and a home run with two RBI.

The Waterloo Bucks took the win against the Bismarck Larks 12-3. Keaton Parker (Upper Iowa University) had a terrific performance on the mound pitching six innings with six strikeouts allowing only one run to score. Ryan Guardino (Tennessee Tech University) was clutch at the plate, driving in four runs with three hits including a home run in the eighth inning. The team combined for 12 hits and three doubles on the night.

The Green Bay Rockers strike early taking the win against the Lakeshore Chinooks. With an explosive fourth inning the Chinooks hit two home runs by Brendan Ryan (Texas A&M University-Corpus Christi) and Owen Jackson (University of Toledo) giving them a seven run lead. Jackson had two hits on the night with three RBI. Justin Loer (Xavier University) had the win on the mound throwing six innings with eight strikeouts earning Northwoods League Pitcher of the Night.