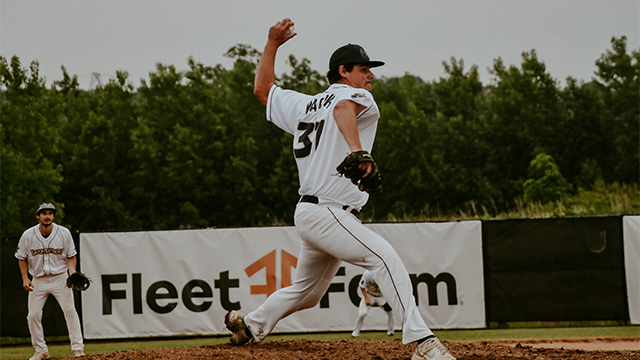 After Monday’s games six teams rally back to split their series. The Kalamazoo Growlers stay hot winning their seventh game in a row. The Growlers now have a winning 12-7 record. The St.Cloud Rox win their second series in a row with a 5 game winning streak working their way back to take the lead in the league.

The Traverse City Pit Spitters split the series against the Green Bay Rockers 7-2. The Pit Spitters struck first, scoring six runs in the second inning. Trey Truitt III (North Carolina State University) scored the first two runs with a home run over center field. Jared Miller (Oakland University) also had an RBI single in the second. Miller later hit a triple to start the fourth inning. Camden Traficante (Stetson University) scored the last run of the game with an RBI double. Traficante had two hits, one RBI and a stolen base.

The Kokomo Jackrabbits rallied back to defeat the Battle Creek Battle Jacks 7-6. With six players having a multi-hit game Mat Aribal (University of Hawaii) led the offense with three hits including a double, one RBI and a stolen base. Luke Satori (University of Nebraska) and Connor Throneberry (Pennsylvania State University) both had two hits with two doubles each. Alejandro Holguin (University of South Carolina – Upstate) also had two hits with a double in the fifth to score a run.

The Waterloo Bucks rallied back in the ninth inning to split the series against the La Crosse Loggers 9-8. Down by one run with two outs in the bottom of the ninth, Jalen Martinez (Iowa Central Community College) drove a ball to right field to score the two final runs to walk off the game. Colin Kasperbuaer (Ohio University) had two hits with one double, a walk and one RBI. Ryan Guardino (Tennessee Tech University) had two hits with two stolen bases scoring each time he reached base.

The Madison Mallards split the series with the Fond du Lac Dock Spiders with a victory of 5-2. Michael Finan (Iowa Western Community College) threw a complete five innings allowing only two runs to score. Christian Rivera (Erskine College) and Noah Smith (University of Louisville) both had two hits to lead the Mallards. They combined for eight hits to earn  their 10th win of the season.

The Kalamazoo Growlers win the series against the Kenosha Kingfish 8-4. Edgardo Villegas (University of Miami) drove in the first runs of the game with a double to center field. Villegas had two hits, one walk and two RBI. Colton Coca (Central Michigan University)  also had two hits with a double. The Growlers scored their final run in the ninth inning with an RBI single by Luke Storm (Duke University). Storm had one hit with three walks.

The Rochester Honkers split the series in a scoreless 5-0 victory. Noah Rooney (University of Minnesota) earned Northwoods Pitcher of the Night throwing six scoreless innings giving up only three hits. Kevin Dowdell (West Virginia University) led the team with two hits with a single and double driving in one run. Nico Regino (San Joaquin Delta College) scored the final run of the game with an RBI single. Regino had two hits with a double and one RBI.

In a hitters game, the Mankato MoonDogs took down the Bismarck Larks 10-9 to split the series. The MoonDogs generated nine hits with Justin Decriscio (University of San Diego) driving three singles with two RBI and one stolen base. The MoonDogs scored their first five runs in the first innings with four walks when bases were loaded. Derek Shoen (University of Mary) had three walks with one RBI. Kai Roberts (University of Utah) had two hits, one walk and RBI.

The St.Cloud Rox won the series defeating the Willmar Stingers 5-2. The Rox took the lead in the bottom of the eighth inning scoring three runs. Brice Matthews (University of Nebraska) drove in a run with a triple to center field. Brady Prewit (Colorado State University – Pueblo) drove in the next run with a single. Trevor Austin (Mercer University) had three singles to get on base and scored each time.