The St.Cloud Rox Split Their Series With Three Home Runs Scoring Six Of Their Seven Runs 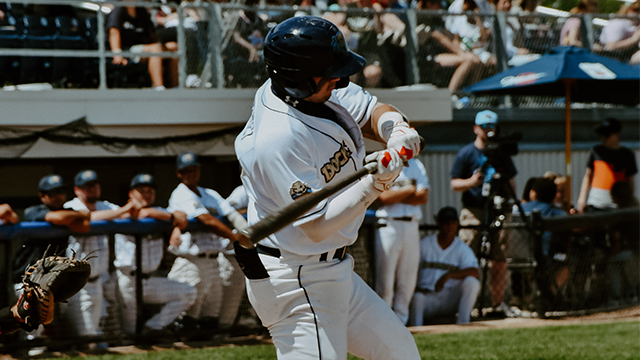 The St.Cloud Rox won their eighth game of the second half of the season with three home runs scoring six of their seven runs of the night. The Willmar Stingers also continue their success winning their eight game in a row as they fight for the leading spot in the Great Plains West against the St.Cloud Rox.  Two games tonight have been postponed due to weather.

The Wausau Woodchucks bounced back to split the series against the Wisconsin Rapids Rafters 12-3. Chase Hug (University of Evansville) led the  Woodchucks with two home runs and two RBI’s. Ryan Sepede (Brigham Young University) contributed to the offense with a home run and four RBI. Zach Levenson (University of Miami) reached base four times with two hits and two walks including a home run and two RBI. Nate Madej (Florida Southern College) had the win on the mound throwing five innings with five strikeouts.

The Lakeshore Chinooks won their third game in a row as they swept the Fond du Lac Dock Spiders 5-2. Scott Rouse (Ohio Dominican University) earned the win on the mound throwing the first six innings with six strikeouts allowing zero runs to score. Matthias Haas (Xavier University) reached base three times with a double and two singles. Caden Kaiser (Ohio State University) had two hits with a double, three RBI, two walks and a stolen base. The Chinooks combined for ten hits with zero errors on the field to take the win.

The Mankato MoonDogs rallied back to split the series against the Duluth Huskies 4-2. The MoonDogs took the lead in the top of the eighth inning with a two run RBI single by Charles McAdoo (San Jose State University). Donovan Schultz (University of Evansville) started the game throwing 4.2 innings with eight strikeouts allowing two runs to score. Jakob Meyer (University of Evansville) earned the win throwing two innings with four strikeouts giving up one hit. The pitching staff combined for 15 strikeouts to win their fourth game of the second half of the season.

The Rochester Honkers swept the series as they defeated the Waterloo Bucks 11-2. The Honkers struck first with an RBI single by Alex Ritzer (University of North Carolina at Chapel Hill) scoring two runs. Ritzer had two hits with four RBI and two walks on the night. Jakob Guardado (Pasadena City College) had the only double for his team, reaching base twice, scoring each time. Nico Regino (Charleston Southern University) had two hits with a stolen base, scoring once. Jacob Smith (University of Tennessee at Martin) was the starting pitcher and had the win on the mound throwing five innings with three strikeouts giving up one hit.

The Green Bay Rockers won their fifth game of the second half of the season as they defeated the Madison Mallards 12-6. The Rockers scored four runs in the fourth inning with an RBI triple by Griffin Stevens (Tiffin University). Stevens had four hits with six RBI and one walk earning Northwoods League Player of the Night. Tristin Garcia (Western Kentucky) contributed to the offense with a double and a triple with one RBI and two walks. Will Semb (University of Minnesota) had the win on the mound throwing the first six innings with six strikeouts.

The Willmar Stingers won their second game in a row taking the series against the Minnesota Mud Puppies 11-5. Will Hodo (University of Alabama) led the starters with a triple, home run and four RBI. Brett Bateman (University of Minnesota) contributed to the offense reaching base four times with three hits including a double and one RBI. The Stingers combined for nine hits and zero errors on the field earning their eighth victory in a row.

The St.Cloud Rox won their eighth game of the second half of the season as they defeated the Eau Claire Express 7-2. Ethan Mann (Dallas Baptist) drove in the first runs of the game with a home run over the left field fence. Charlie Condon (University of Georgia)  scored the next three runs in the top of the third with another home run. O’Neill Burgos (Southern University and A&M College) drove in the last run of the game for the Rox with the team’s third home run of the game. Hunter Day (Tarleton State University) was the starting pitcher throwing seven innings with five strikeouts giving up one hit.