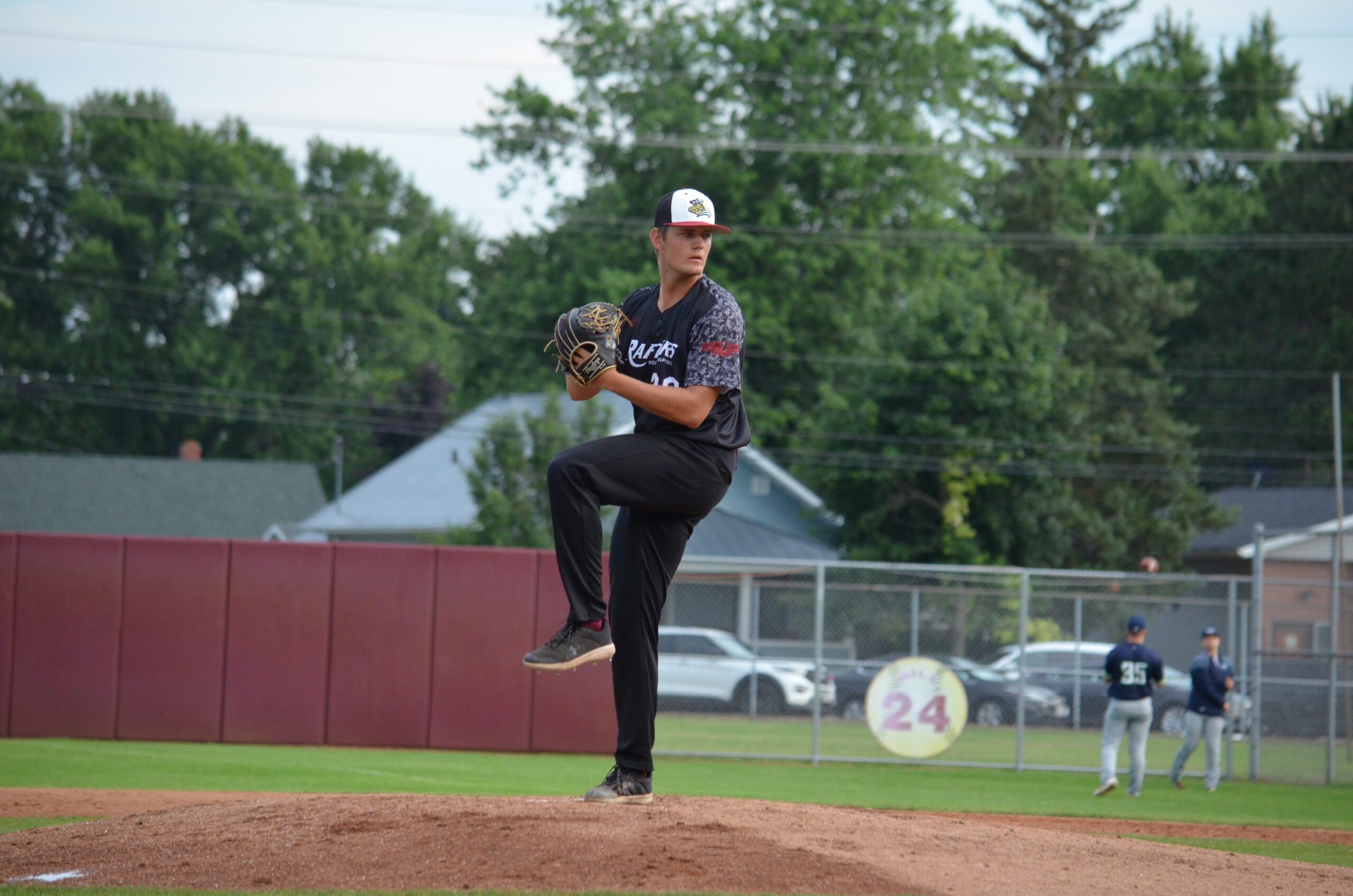 The Traverse City Pit Spitters lead the Great Lakes East with a 9-3 record in the second half of the season with four straight wins. The Pit Spitters defeated the Chinooks tonight with nine hits and four stolen bases. The Wisconsin Rapids Rafters continue their success winning eight of their past ten games leading the league with 11 wins in the second half of the season.

The Kalamazoo Growlers defeated the Battle Creek Battle Jacks 10-1 in an eight inning game. The Growlers scored seven runs in the seventh inning with six hits throughout the game. Anthony Stephan (University of Virginia) led the team with two hits with a stolen base scoring each time he reached base. Casen Taggart (Centralia College) reached base four times with a hit, three hits and an RBI, scoring once. Connor Schuman (Grand Valley State University) drove in two runs with one hit on the night. Dylan Freeman (University of Montevallo) had a great night on the mound throwing seven innings with four strikeouts allowing only one run to score.

The Eau Claire Express rallied back to take down the La Crosse Loggers 4-3. Reed Latimer (University of Montevallo) and Jake Sapien (Stanford University) both had an RBI single in the bottom of the fifth to take the lead. Sapien led the team with three hits including a double and an RBI. Cadyn Schwabe (North Dakota State University) also had three hits with a triple and two stolen bases.  Alec Baker (Dallas Baptist University) started the game throwing 5.1 innings with nine strikeouts. Chris Baytosh (California Polytechnic State University (Cal Poly) came into the game to throw the next three innings with five strikeouts giving up one hit.

The Rochester Honkers started off the series with a win as they defeated the Willmar Stingers 6-5. Dario Gomez (University of Nevada, Reno) walked off the game in the bottom of the 12th inning with a single driving in Nate Chester (Mississippi State University). Gomez led the team with three hits, one RBI and a stolen base. Chester reached base twice scoring each time. Carson Stevens (California Polytechnic State University (Cal Poly) and Will Asby (Sacramento City College) both had a double each to add to the 13 hits that the Honkers combined for. Troy Wentworth (University of California, Irvine) came into the game in the seventh inning throwing three innings with five strikeouts giving up no hits.

The Kenosha earned their eighth win in the second half of the season as they defeated the Wausau Woodchucks 9-3. The Kingfish struck first scoring two runs in the first inning with a home run by Parker Stinson (Indiana State University). The scored their last two runs in the eighth inning with a home run by Drake Westcott (University of Louisville) for his second hit of the night. Loa Victor (Texas State University) earned the win on the mound throwing the first 5.2 innings with eight strikeouts. The Kingfish combined for eight hits with 11 strikeouts by the pitching staff to win the first game of the series.

The Rockford Rivets combined for 18 hits to take the first win of the series against the Kokomo Jackrabbits 12-5. The Rivets scored six runs in the bottom of the eighth inning with an RBI triple by Colton Klein (Carthage College) and RBI double by Ty Crittenberger (Western Kentucky). Crittenberger had three hits with two RBI. Matthew Mebane (South Georgia State College) had three hits with a double and three RBI along with a walk. Giovany Lorenzo (University of Tampa) reached base five times with three hits and two walks, scoring three times. Ricky Castro (Purdue University) threw the first seven innings with five strikeouts to earn the win.

The Green Bay Rockers now have a winning record as they took down the Madison Mallards 11-4. The Rockers scored six runs in the bottom of the second inning with a home run by Keniel De Leon (Long Island University – Brooklyn). De Leon had three hits with five RBI on the night. Tristin Garcia (Western Kentucky) had four hits with a double and three RBI. Griffin Stevens (Tiffin University) scored twice with two hits including a double and one RBI. Will Semb (University of Minnesota) earned the win on the mound throwing seven innings with eight strikeouts. The Rockers combined for a total of 14 hits with zero errors on the field.

The Wisconsin Rapids Rafters won their third game in a row as they defeated the Fond du Lac Dock Spiders 6-5. The Rafters struck first, scoring four runs in the top of the first inning. Harry Owen (Consumnes River College) led the team with two hits with a double and two RBI. Colin Tuft (University of Virginia) also had a double with an RBI scoring once. Mckinley Erves (LaGrange College) reached base four times with three walks and a hit. Michael Lindsey (Midland College (TX) started the game throwing four innings with five strikeouts.

The Duluth Huskies earned their second win in a row as they took down the Waterloo Bucks 11-9. The Huskies scored nine runs in the top of the fourth inning. Jared Mettam (Saint Mary’s College) earned Northwoods League Player of the Night with three hits including two doubles and five RBI. Peyton Powell (University of Texas at Austin) and Hudson Sapp (University of Mississippi) both had two hits scoring as they reached base. Mason Burns (Western Kentucky) earned the win on the mound as the starting pitcher throwing five innings with six strikeouts. The Huskies had 14 hits on the night.

The Mankato MoonDogs scored in five innings to win the first game of the series against the Minnesota Mud Puppies 10-2. The MoonDogs scored five runs in the third inning with two RBI singles by Angelo Peraza (University of San Diego) and Orlando Salinas (Kansas State University). Derek Shoen (University of Mary) drove in one run during the third with a double to right field. Salinas led the team with three hits with a home run and three RBI. Peraza had two hits with two walks and two stolen bases. Drew Buhr (Bellarmine University) earned Northwoods League Pitcher of the Night throwing six innings with seven strikeouts allowing zero runs to score.