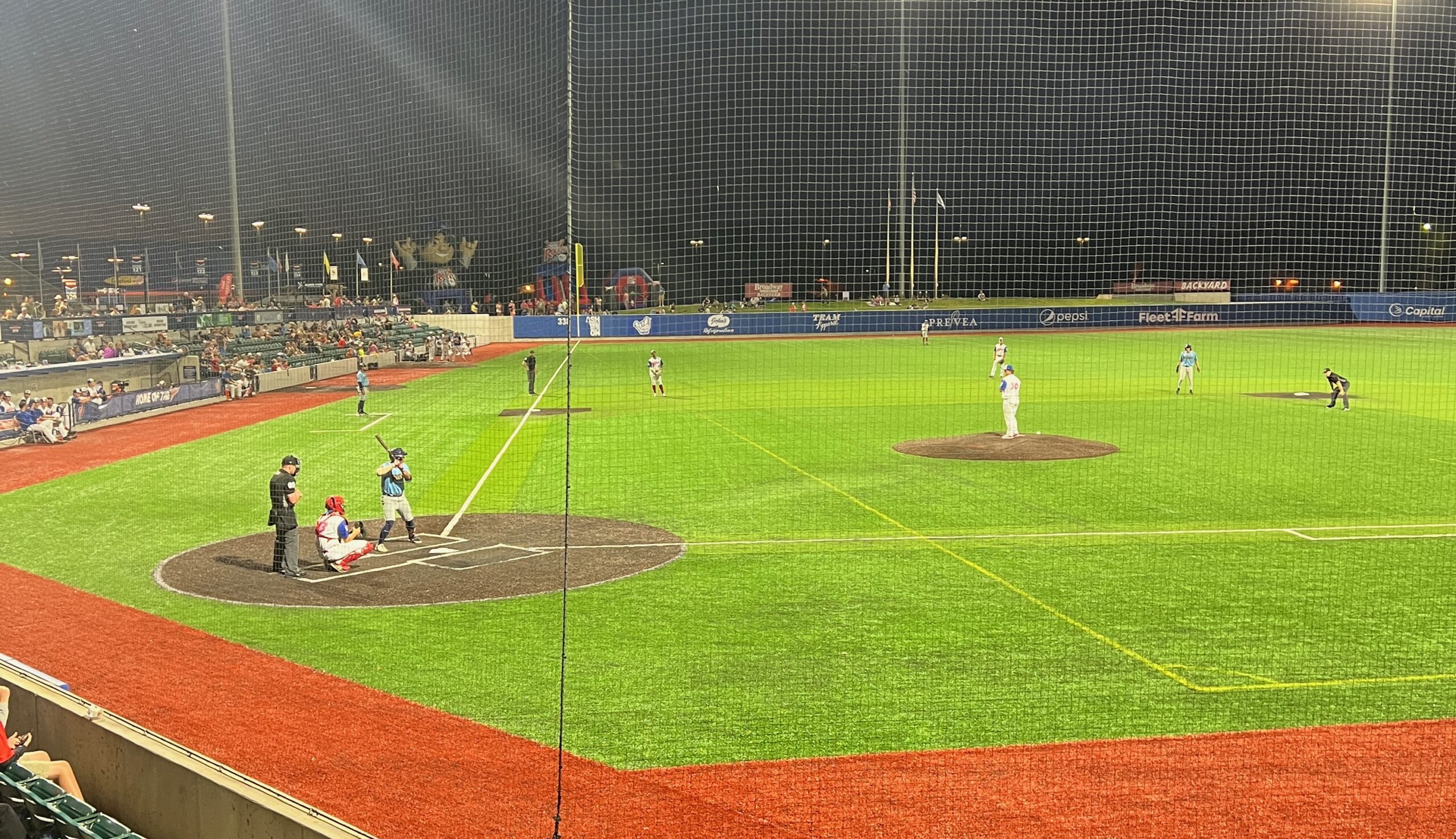 The Traverse City Pit Spitters continued their win streak as they defeated the Kenosha Kingfish for their seventh win in a row. The Willmar Stingers won their ninth game in a row and now have one of the longest win streaks of the season. The St.Cloud Rox bounced back to sweep their series earning their 15th win as they came closer to taking the lead of the Great Lakes West.

The Kokomo Jackrabbits bounced back to defeat the Kalamazoo Growlers 9-6. Alejandro Holguin (University of South Carolina – Upstate) led the offense with three hits including a double and an RBI. The Jackrabbits scored four runs in the bottom of the fourth inning with an RBI by Brayden Carter (Otterbein University) to start the inning. Carter had two hits with a walk, hit by pitch and an RBI scoring three times he reached base. Conner Stewart (Point Loma Nazarene University) contributed to the offense with two hits and two RBI. Kyle Gearding (Case Western Reserve University) started the game throwing 6.1 innings with three strikeouts.

The Rockford Rivets swept the Battle Creek Battle Jacks 11-2 for the third time in a row. The Rivets scored five runs in the second inning to advance their lead. Matthew Mebane (South Georgia State College) started the inning with an RBI double to center field. Mebane had three RBI on the night. Drew Baker (Wright State University) led the offense with three hits and a stolen base scoring twice. Brandon Bannon (University of Illinois at Springfield) reached base four times with two hits, a walk and a hit by pitch. Alex Muns (South Georgia State College) started the game and earned the win on the mound throwing five innings with three strikeouts.

The Madison Mallards bounced back to defeat the Wausau Woodchucks 6-4. Scott Shaw (Rider University) led the offense with three hits including two singles and a double. J.T. Mabry (Middle Tennessee State University) drove in two runs in the sixth inning to take the lead. Mabry had two hits with a double and two RBI on the night. Ryan O’Hara (University of Illinois)  started the game throwing four innings with two strikeouts. Bryce Leedle (St. Thomas) entered the game in the fifth inning to earn the win throwing 3.1 innings with eight strikeouts giving up only two hits.

The Fond du Lac Dock Spiders bounce back to defeat the Green Bay Rockers 10-4. The Spiders scored six runs in the third inning to take the lead with an RBI single by Nick Mitchell (Western Illinois University) and a three run home run by Branden Comia (University of Illinois). Mitchell had two hits with a double, one RBI and two walks. Comia had three RBI with a hit by pitch. Sawyer Smith (St. Cloud State University) had three singles with a double and one RBI on the night. Connor Mckenna (University of Illinois at Springfield) earned the win on the mound throwing two innings with two strikeouts.

The Wisconsin Rapids Rafters rallied back to take down the Lakeshore Chinooks 6-5. With a tied score going into the ninth inning Jacob Igawa (University of Hawaii) drove a single to center field with two outs to walk off the game. Aidan Brewer (Hillsdale College) led the offense with one hit, four RBI and a stolen base. Levi Jensen (University of North Alabama) had the only multi hit game going two for two with two walks. Nick Torres (Western Carolina) started the game throwing four innings with four strikeouts. Josh Howitt (California State University, Fullerton) pitched the next four innings with seven strikeouts.

The Mankato MoonDogs scored in almost every inning to take the win against the Rochester Honkers 11-3. Five players from the MoonDogs had multi-hit games including Sean Ross (Indiana State University) and Easton Fritcher (University of Minnesota) who went three for four. Ross had a triple with one RBI and two walks. Charles McAdoo (San Jose State University) had the only home run for his team in the sixth inning. McAdoo had three RBI on the night. Sky Wells (California State University, Long Beach) was the closing pitcher throwing the last two innings with two strikeouts giving up no hits.

For their second win in a row the St.Cloud Rox take the win against the Waterloo Bucks 10-4. Charlie Condon (University of Georgia) drove in the first runs of the game with a double to center field. Carson Keithley (Texas State University) tacked on two more runs with a home run over the right field fence. Keithley had two hits with three RBI and a stolen base. Condon also had three RBI with a walk. Nick Hyde (Western Carolina University) started the game on the mound throwing six innings with two strikeouts to earn the win. The Rox generated 10 hits with zero errors on the field.

The Huskies bounced back to split the series against the Bismarck Larks 4-1. The Huskies struck first scoring two runs in the sixth inning with an RBI single by Kristian Campbell (Georgia Tech). Jonathan Vastine (Vanderbilt University) drove in the final run of the game in the top of the ninth inning with a single to second base. Vastine reached base three times with a hit, two walks and a stolen base scoring once. Jake Combs (Southern Illinois University) earned Northwoods League Pitcher of the Night throwing six innings with five strikeouts allowing zero runs to score.

The Willmar Stingers won their ninth game in a row as they defeated the Eau Claire Express 5-4. The Stingers struck first with an RBI double by Jakob Christian (Point Loma Nazarene University) to score Joey Walls (California State University, Long Beach). Christian had one hit with a walk, scoring once as he reached base. Walls had a walk, double and a stolen base scoring each time he reached base. Steven Brooks (California Polytechnic State University) started the game throwing six innings with six strikeouts giving up only two hits. Mitch Gutknecht (Minnesota State University, Mankato) closed the game throwing the last three innings with four strikeouts to earn the win.