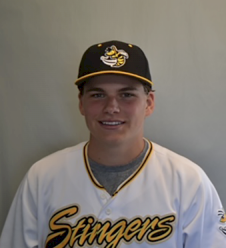 Nolan Kemp (University of St. Thomas) from the Willmar Stingers earned Northwoods League Pitcher of the Night throwing 3.2 innings with seven strikeouts giving up only two hits and allowed zero runs to score. Kemp led the Stingers to their 12th win of the second half of the season as he closed the game against the Loggers. Kemp has thrown a total of 7.2 innings with nine strikeouts on the season so far.