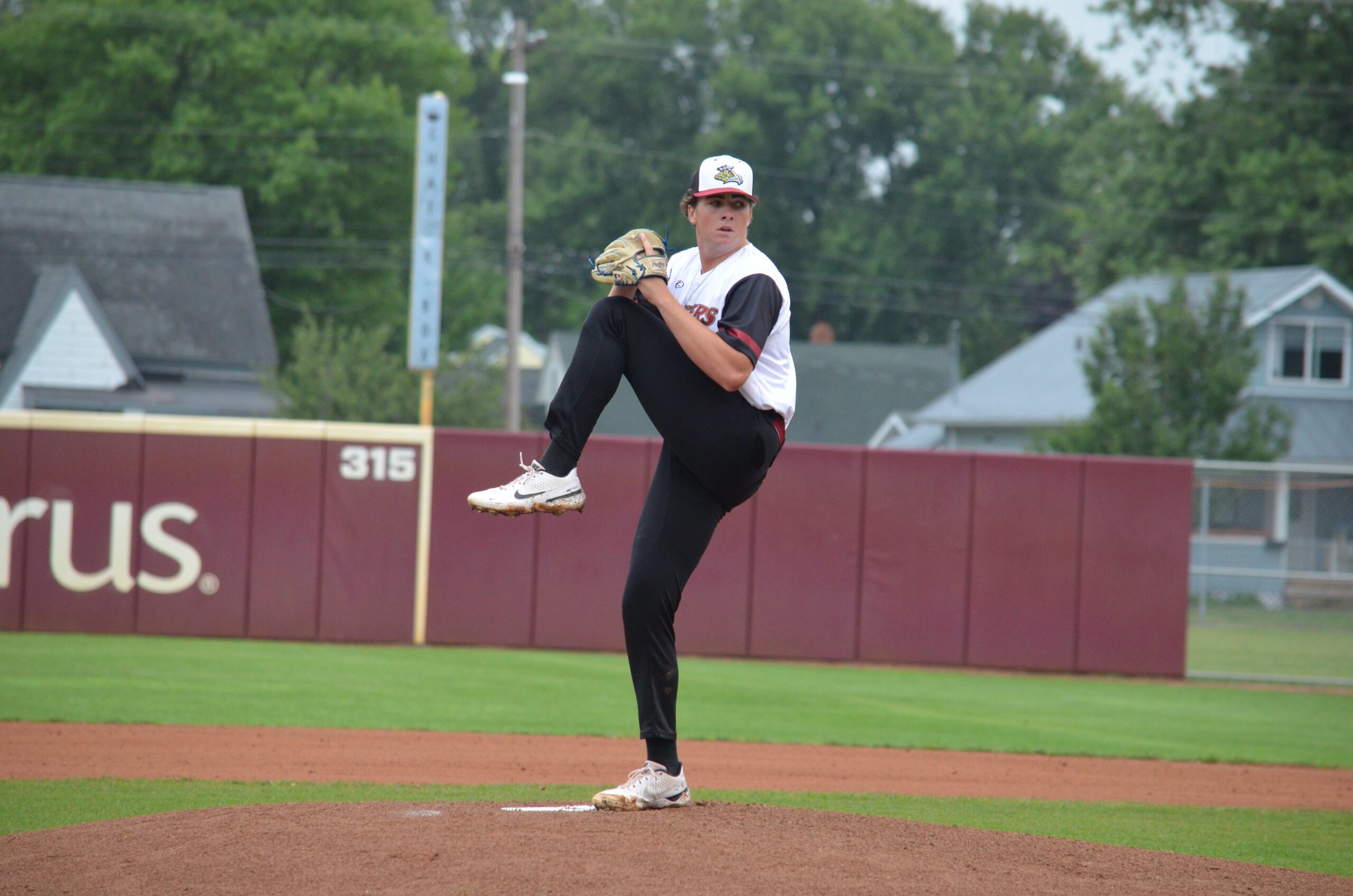 For the last series of Northwoods League games, the Kalamazoo Growlers and Wisconsin Rapids Rafters currently lead the league with a five game win streak. The Traverse City Pit Spitters are also on their way to another series win as they won their fourth game in a row to lead the Great Lakes East. Tomorrow will be the last full day of Northwoods League Games before the playoffs begin.

The Kalamazoo Growlers rallied back to defeat the Kenosha Kingfish 9-1. The Growlers scored six runs in the bottom of the seventh inning with an RBI double by Banks Tolley (University of Mississippi) and RBI singles by Casen Taggart (Centralia College) and Myles Beale (Northwood University). Taggart reached base four times with two hits, two hits by pitches and two RBI. Taggart led the team with three hits, scoring twice as he reached base. Beale went two for four with two RBI and a stolen base. Nolan Milliman (Central Washington University) earned the win on the mound throwing the first five innings with three strikeouts allowing only one run to score.

For their fourth win in a row the Traverse City Pit Spitters took down the Kokomo Jackrabbits 4-2. The Pit Spitters struck first, scoring their first two runs in the second inning with an RBI double by Glenn Miller (Eastern Michigan University). Miller had one hit with two RBI. Sam Tackett (Virginia Tech) drove in the third run with a double to left field, later scoring on a wild pitch. Tackett reached base three times with a hit, walk and a hit by pitch, scoring twice. Camden Traficante (Embry–Riddle Aeronautical University) led the team with two hits including a double and a stolen base. O’Kelly McWilliams (Wofford College) was the starting pitcher throwing five innings with six strikeouts.

For their second win in a row the Rockford Rivets defeated the Battle Creek Battle Jacks 3-1. The Rivets rallied back to score two runs in the bottom of the third inning with a double by Gino Gazzillo (Prairie State College). Gazzillo had one hit with a walk and two RBI. Justin Kerestes (Gannon University) drove in the final run of the game with a single to right field in the sixth inning. Nick Vollemert (St. Ambrose University) threw the first four innings with five strikeouts allowing only one run to score to earn the win on the mound. Aaron Husson (Central Michigan University) came into the game to throw two innings with three strikeouts giving up only one hit.

The Green Bay Rockers defeated the Lakeshore Chinooks 6-3 for their 20th win of the second half of the season. Jake Mastillo (Long Island University – Brooklyn) went two for five with a home run and one RBI. Keniel De Leon reached base with four walks, scoring three times. Griffin Stevens (Tiffin University) had two hits on the night with a walk and one RBI. Jacob Young (Fairmont State University) came into the game to throw four innings with two strikeouts giving up only one hit. Caden Capomaccio (University of Minnesota) threw the last two innings with two strikeouts also giving up only one hit. The Rockers had eight hits on the night with zero errors to take the win.

The Wisconsin Rapids Rafters won their fifth game in a row as they took down the Fond du Lac Dock Spiders 8-2. Cooper Robinson (University of California, Irvine) led the Rafters throwing four scoreless innings with one strikeouts giving up no hits. Cody Urban (University of Wisconsin – Stout) threw the next two innings to earn the win on the mound with two strikeouts. Garrett Broussard (Utah Valley University) went two for four with a home run. one RBI and scored twice as he reached base. Chase Call (University of California, Irvine) and Aidan Brewer (Hillsdale College) each had two hits with one RBI on the night. The Rafters had six hits with seven walks to take the win.

The Wausau Woodchucks took the first game of the series against the Madison Mallards 2-1. Jace Baumann (University of Wisconsin – Stout) earned Northwoods League Pitcher of the Night, throwing seven innings with four strikeouts giving up only three hits. Aidan Corn (Pasco-Hernando State College) earned the win on the mound throwing the next two innings with two strikeouts. The Woodchucks rallied back to score two runs in the bottom of the eighth inning with an RBI single by Tyler Cox (Eckerd College). Cox had two hits with two RBI. Drew Stengren (Central Michigan University) had the other hit of the game, scoring as he reached first.

The La Crosse Loggers started the series off with a win as they took down the Mankato MoonDogs 5-4. Jack Haley (California State University, Fullerton) led the offense with three hits including a stolen base and one RBI. Blaise Priester (Meridian Community College) had the only home run for his team going two for four with one RBI. Reed Stallman (Des Moines Area Community College) and Liam Jones (Crown College) both had a double each with two RBI by Stallman. Alijah Acevedo (Elgin Community College) had six strikeouts in 4.1 innings to start the game for the Loggers. The Loggers had ten hits to earn their 15 win of the second half of the season.

The Waterloo Bucks defeated the Minnesota Mud Puppies 7-4 for the first game of the series. The Bucks struck first scoring two runs in the bottom of the second inning with an RBI single by Colt Harris (Trinity University). Harris led the team with three hits and two RBI. Josh Patrick (Crowder College) contributed to the offense with two hits, two walks, two stolen bases and one RBI. Blake Benson (University of the Ozarks) earned the win on the mound throwing the first eight innings with ten strikeouts. Tyler Vancise (Crown College) threw the last inning with two strikeouts.

The Willmar Stingers won their 26th game of the season as they took down the Duluth Huskies 11-1. Kyle Payne (Northwest Nazarene University) earned Northwoods League Player of the Night going three for three with two home runs and four RBI. Dalton Pearson (Georgia State University) reached base three times with a double, two walks and one stolen base. Josh Fitzgerald (University of Minnesota) and Graysen Tarlow (California State University, Northridge) each had two walks with a hit, scoring twice as they reached base. Seth Miller (Augustana University) was the starting pitcher throwing six innings with eight strikeouts allowing zero runs to score.

The Bismarck Larks won their second game in a row as they took down the St.Cloud Rox 4-2. The Larks rallied back to take the lead in the seventh inning with a home run by Jake Hjelle (University of Minnesota-Crookston). Hjelle led the team with two hits including a double with three RBI and two stolen bases. Luke Glascoe (University of California, San Diego) also contributed to the offense with two hits with a double, two walks and two stolen bases. Alec Danen (Viterbo University) earned the win on the mound throwing three innings with four strikeouts giving up no hits. The Larks had six hits on the night with five walks to take the win.

The Rochester Honkers won the first game of the series against the Eau Claire Express 8-6. Tyler White (California State University, Long Beach) led the Honkers going three for five with a double, two RBI and a walk. Alex Ritzer (University of North Carolina at Chapel Hill) had two singles with three stolen bases scoring once as he reached base. Brendan O’sullivan (San Joaquin Delta College) also had two hits with two RBI. Andrew Duran (University of Arkansas at Pine Bluff) started the game throwing five innings with two strikeouts. Sam Hanson (Saint John’s University) threw the last inning with one strikeouts giving up no hits. The Honkers had 11 hits on the night with seven strikeouts from the pitching staff to start the series.