The St.Cloud Rox Won Their Seventh Game In A Row With A Walk Off Victory 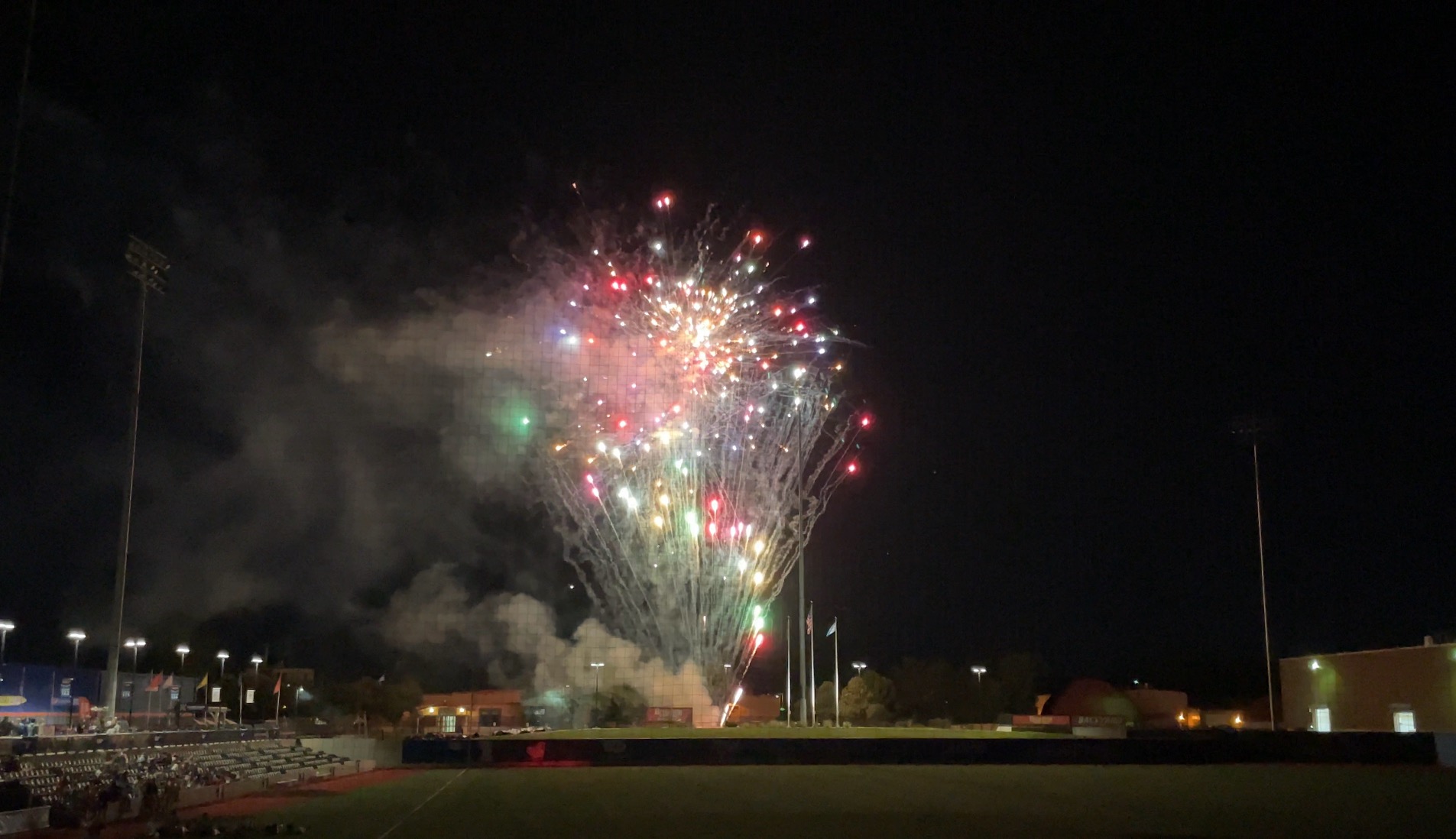 The their seventh win in a row, the St.Cloud Rox win another series and are only two wins away from leading the Great Plains West. The Rox defeated the Minnesota Mud Puppies tonight in an exciting nine inning walk off. The Wisconsin Rapids Rafters also continue their success sweeping their second series in a row and earning their 27th win in the second half of the season to lead the Northwoods League.

The Kalamazoo Growlers defeated the Battle Creek Battle Jacks 14-2 to sweep the series. Banks Tolley (University of Mississippi) had the first home run for his team in the third inning to score two runs. Banks had one hit with three walks. The Growlers scored four more runs in the fifth inning with a home run by Anthony Stephan (University of Virginia). Stephan had two hits, two walks with four RBI and a stolen base. Greg Ziegler (Michigan State University) ended the game with the third home run driving in three runs. Ziegler had two hits with three RBI. Eamon Horwedel (Ohio University) earned the win on the mound throwing the first six innings with four strikeouts.

The Rockford Rivets bounced back to take down the Kokomo Jackrabbits 9-1. Ross Thompson (Heidelberg University) led the team throwing the first five innings with three strikeouts allowing only one run to score. Tucker Shalley (Parkland College) closed the game throwing the last inning with two strikeouts giving up no hits. Bryson Parks (Western Carolina University) reached base four times with a hit, three walks, a stolen base and one RBI. Giovany Lorenzo (University of Tampa) drove in the first run of the game with double. Lorenzo had one hit with one walk. Joseph Stagowski (Rockford University) reached base with two walks and stole two bases.

The Lakeshore Chinooks rallied back to defeat the Fond du Lac Dock Spiders 6-1. The Chinooks scored two runs in the third inning with a home run by Matthew Deprey (Xavier University) to take the lead. Deprey had one hit with a walk and two RBI. Bryant Diel (University of Northwestern Ohio) crushed a double to center field to score two more runs for the Chinooks. Diel had two hits with two RBI. Andy Nelson (University of Iowa) had a triple in the seventh inning to score on a wild pitch. Nelson had two hits with a stolen base. Mitch Alba (Eastern Illinois University) was the starting pitcher throwing four innings with three strikeouts.

The Duluth Huskies won their second game in a row to sweep the La Crosse Loggers 6-5. The Huskies struck first scoring two runs in the second inning. Michael Hallquist (Minnesota College) led the team reaching base twice with a single, walk and three RBI. Jared Mettam (Saint Mary’s College) and Devin Hurdle (University Nebraska Omaha) both had a single with two walks scoring twice as they reached base. Drew Conn (Grand View University) started the game throwing five innings with three strikeouts allowing zero runs to score. The Huskies had seven hits on the night with nine walks to take the win.

The Mankato MoonDogs took game two of the series as they defeated the Eau Claire Express 5-4. Down by one run heading to the bottom of the ninth Kai Roberts (University of Utah) reached base with a lead off single. Derek Shoen (University of Mary) followed his hit up with a triple to drive in the tying run of the game. Dustin Crenshaw (Grand Canyon University) walked the game off with a single to center. Roberts and Crenshaw both had three hits on the night to lead the team. Shoen had two hits with two RBI. Kobe Lovell (Southwest Minnesota State University) threw the first six innings of the game with one strikeout.

The Wausau Woodchucks bounced back to split the series against the Green Bay Rockers 3-1. The Woodchucks scored their three runs in the top of the fourth inning with an RBI single by Garret Hill. Hill (North Dakota State University) reached base with a hit, walk and two RBI. Elie Kilgman (Wake Forest University) had the only multi hit game for his team with two singles scoring once as he reached base. Adrian Lopez (Menlo College) started the game throwing six innings with two strikeouts to earn the win on the mound. Brock Warren (Ripon College) closed the game throwing three innings with five strikeouts.

The Wisconsin Rapids Rafters walked the game off for their fourth win in a row against the Madison Mallards 6-5. Colin Tuft (University of Virginia) earned Northwoods League Player of the Night with four hits scoring twice as he reached base. Garrett Broussard (Utah Valley University) drove in the final run of the game with a single to left field. Broussard had two hits with a walk and three RBI. Chase Call (University of California, Irvine) had the only home run for his team in the seventh inning. Cael Chatham (High Point University) earned the win on the mound throwing the last inning of the game with one strikeout. The Rafters had eleven hits on the night to sweep the Mallards.

For their 26th win of the second half of the season, the Traverse City Pit Spitters took down the Kenosha Kingfish 6-4. Marshall Toole (Wofford College) went two for four with two singles and a walk scoring twice as he reached base. Sam Tackett (Virginia Tech) had two hits on the night with a double and a stolen base. Trey Truitt III (North Carolina State University) and Alec Atkinson (Yale University) both had a double each with three RBI combined. Easton Johnson (Creighton University) earned Northwoods League Pitcher of the Night throwing seven innings with five strikeouts allowing zero runs to score. Jake Buxton (California Polytechnic State University (Cal Poly) threw the last two innings with four strikeouts to close the game.

The Rochester Honkers took down the Waterloo Bucks 11-6 to sweep the series. The Honkers scored five runs in the sixth inning with an RBI double by Menelik Israel (Duke University) and RBI single by Carson Stevens (California Polytechnic State University (Cal Poly). Israel had two this with a stolen base and one RBI on the night. Stevens led the team with three hits, a walk and a hit by pitch. Tyler White (California State University, Long Beach) reached base four times with a double, three walks and two RBI. Cole Mammenga (University of Minnesota Morris) threw the last three innings with two strikeouts giving up only two hits and allowed zero runs to score.

The St.Cloud Rox rallied back to sweep the Minnesota Mud Puppies 7-6. The Rox scored four runs in the bottom of the seventh inning with a home run by Ike Mezzenga (University of Minnesota). Mezzenga had one  hit with one walk and three RBI. The Rox score two more runs in the bottom of the ninth to walk off the game with a single by Charlie Condon (University of Georgia) and Will Worthington (University of San Diego). Condon had two hits with a walk and two RBI. Carter Petron (Southwest Minnesota State University) was the starting pitcher for the Rox throwing four innings with three strikeouts. Chase Grillo (Washington State University) earned the win throwing the last inning with two strikeouts.

The Bismarck Larks defeated the Willmar Stingers 3-1 to split the series. Kaiden Cardoso (Minot State University) and Jake Hjelle (University of Minnesota-Crookston) both had a double on the night with one RBI by Hjelle. Bradlee Preap (Radford University) came into the game as a pinch hitter to drive in the final run of the game with an RBI single. Carter Rost (Wichita State University) earned the win throwing the first six innings with eight strikeouts giving up only three hits and allowing zero runs to score. Stephen Klenske (Palomar College) came into the game to throw the next two innings with three strikeouts.