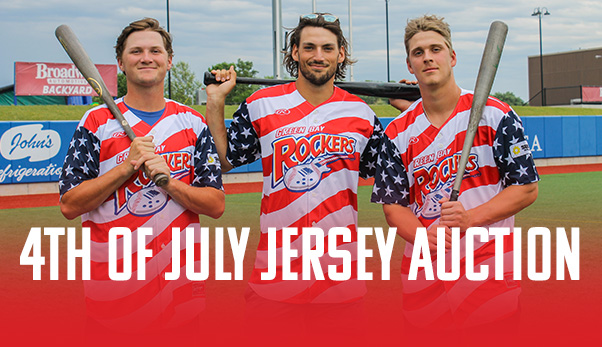 Ashwaubenon, Wis.- The Green Bay Rockers are set to host Sunbelt Rentals Military Appreciation Day on Monday, July 4th for the 12:05 Independence Day matinee  at Capital Credit Union Park against the Wisconsin Rapids Rafters. As part of the day, the Rockers will don a special American Flag themed jersey. All game worn player jerseys are available to be bid on via silent auction below and in-stadium Monday. All proceeds from the jersey auction will benefit George’s Secret Elves, a non-profit that helps many in the Green Bay area, from veterans, to foster kids, to the homeless, by collecting donations and organizing community events.

Fans are invited to come out on Monday beginning when gates open at 11:05am for a live pre-game concert from Carbon Road. It’s also FREE Hot Dog Monday, with hot dogs free at the concessions stands for 90 minutes following gates opening.

Active military and veterans get in free with valid ID, which can be redeemed in person at the SMA Construction Ticket Office at Capital Credit Union Park.

Fans, here is your chance to win a game-worn American Flag themed Rockers jersey, presented by Sunbelt Rentals! You can submit an online bid (minimum bid starting at $75; $150 secures the jersey outright) for as many jerseys as you’d like, that will carry over into Monday’s game on July 4th at 12:05 during which fans will have the chance to match & continue to bid in-person. The auction will end with the last out in the bottom of the 7th inning of Monday’s game and winners will be able to claim their jerseys following the game. Winners do not need to be in attendance, but it is recommended. Should a bid be won online, a member of the Rockers staff will contact you for payment and shipping info. ($5 will be added for shipped orders).

All proceeds from the jersey auction will benefit George’s Secret Elves, a non-profit that helps many in the Green Bay area, from veterans, to foster kids, to the homeless, by collecting donations and organizing community events.

Please note: Upon completion of the game, each player will sign his jersey ONLY if indicated during the bidding process and a member of the Rockers staff will bring those items to the Team Apparel Fan Shop at the ballpark. At that time, credit card payment will be needed to obtain said item. If the bid was won online, a member of the Rockers staff will contact you at the latest by noon the following morning. Patience is requested since as many as 35 transactions will need to be run immediately following the game. Credit Card or check are the two accepted forms of payment for the auction. Cash will not be accepted.

(listed according to jersey #):