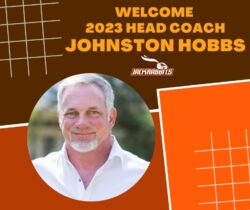 The Kokomo Jackrabbits and ROC Ventures are please to announce the hiring of Johnston Hobbs as our Head Coach and Field Manager for the 2023 season. Hobbs brings decades worth of championship-winning experience to the table where he looks to continue that right here in Kokomo. In collegiate summer leagues, Hobbs was named the Bench Coach for the 2013 Glens Falls Golden Eagles in the Perfect Game Collegiate League. He was then named Head Coach for them for the 2014 season as well as the 2015 season, where under new ownership, they rebranded as the Glens Falls Dragons. In 2016, Johnston managed the West Palm Sharks in the South Florida Collegiate League and then in 2017, the Vermont Mountaineers in the NECBL. In 2018, Johnston led a team of collegiate players undefeated through the PRiBL in Puerto Rico, beating their AA Pro team along the way. Since 2019, Johnston has served as the Head Coach for the Omaha Filthballers in the Cornbelt League. There under Johnston, the Filthballers have captured 3 regular season championships and 3 tournament championships, making the championship game 4 consecutive seasons. Hobbs finished their 2022 season with a .830 winning percentage.

In 2003, Johnston was hired as a consultant for the Turkish Olympic Committee to help develop the Olympic sport of baseball and has worked with 6 individual Olympic athletes, training them for competition. From 2010-2017, Johnston served as Assistant Coach and Catching Coach at Flanagan HS (2010 Nation HS Champions and 2014 #1 ranked) in Pembroke Pines, FL.

No stranger to the Hoosier state, Johnston earned his Master’s Degree in Kinesiology from Indiana University in 1998 before coaching in both the SEC and ACC. He then successfully helped create and build the nations’ largest privately owned Commercial Swimming Pool Management Company. He now owns and operates 224 Performance, PEKE Performance and Hoosier Pool Consultants.

“We’re so excited to have Johnston onboard here for our upcoming season,” says Jackrabbits General Manager, Nathan Martin.  “The amount of experience he’s bringing here to Kokomo is exactly what our fans deserve. We know Johnston is hard at work getting a championship roster together that we know will get our fans excited for next season.”

The Jackrabbits are currently in our off-season but fans can look for our 2023 schedule to come out late November. Be sure to follow our social media for updates on season tickets, promotions and more for the 2023 season!