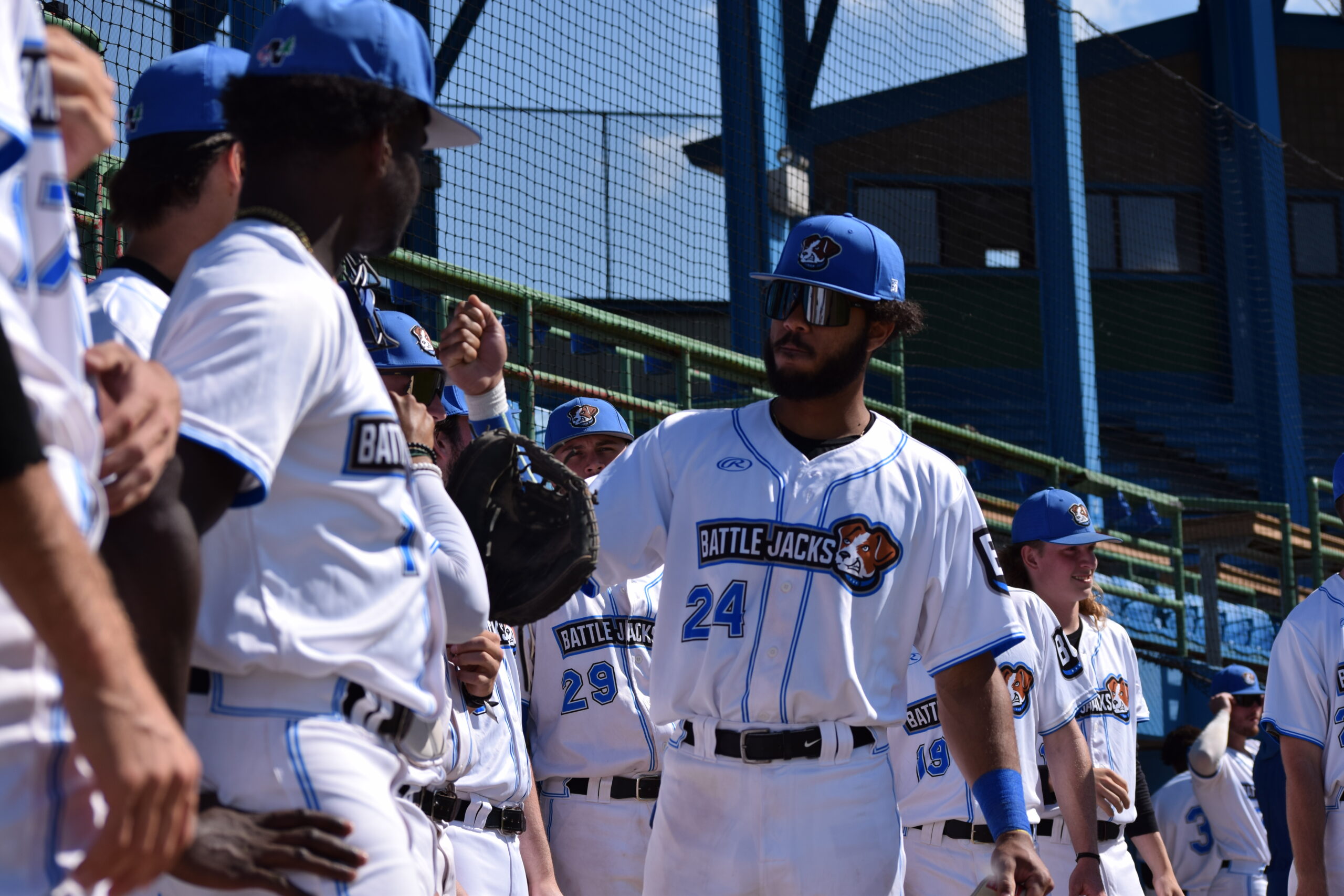 Jace Matkin with the team before first pitch. Article by Bryce Tinson and Brendan Nordstrom, photo by Melissa Vozar

After a two-hour rain delay and eventual cancellation on Wednesday, the Battle Creek Battle Jacks (7-3) and Kokomo Jackrabbits (4-6) were squared away for a Thursday evening doubleheader. Doubleheader games are seven innings apiece and only a half-hour apart. The Battle Jacks and Jackrabbits split the night as BC walked away from game one with a heavy-handed 8-3 victory, but fell in a 4-2 contest to Kokomo.

The game began as a pitcher’s duel between debuting Battle Creek RHP Jackson Braden and Kokomo LHP Reece Marley in the first two innings. Braden let up a single each inning, but shut down any threat, while Marley retired the Jacks in order.

The Kokomo Jackrabbits hopped on the Battle Jacks early with a big three-run third inning to spoil Braden’s debut. A pair of walks and a pair of singles scored a run for the team from down south. Jackrabbits left fielder Alex Neff singled into right field to plate another before third baseman Jon Jon Gazdar hit a sac-fly to score one more, but Neff was caught at second base for a double play. Braden then forced debuting second baseman Matt Aribal to pop out to right to end the bleeding.

The Battle Jacks answered as soon as possible in the bottom of the third crossing a run of their own to shorten the gap to two. With two outs and no one on, second baseman James Canar worked his fourth walk of the season to set up an RBI double from center fielder Bobby Nichols.

RHP Cohen Nies came in relief for the Battle Jacks and let up a two-out single, but a nifty pick-off move caught first baseman Connor Throneberry a bit too far off of the bag.

Battle Creek did not only come all the way back in the bottom of the fourth, but they also roared ahead with a commanding 8-3 lead. The inning began with a hit parade starting with a double from the red hot left fielder Patrick Mills and first baseman Joey Grabanski, his first non-home run extra-base hit. Designated hitter Billy Hancock and right fielder Jace Matkin added on with singles to go ahead by two. Catcher Gabe Sotres took a base, as did Nichols, to load the bases. Third baseman Fisher Pyatt hit a rocket that drifted over the right-field fence for the first grand slam in team history.

Standouts at the plate for BC including 1/3 days from Bobby Nichols and Patrick Mills, who both earned a double and a walk, and Pyatt, who went 1/4 with a grand slam and, therefore, four RBIs.

The Battle Jacks lost game two of the twin bill 4-2. Even with stellar pitching and nine hits, they were unable to muster enough offense to come ahead in this one. That’s something that hasn’t been a problem for Battle Creek as their lowest run total until today was four.

The Jackrabbits got started with the scoring early, plating one in the top of the first. They didn’t stop there as they got three more in the third by way of back-to-back doubles from Luke Sartori and Alex Neff and a single from Matt Aribal. An error would also allow Aribal to come around and score.

They were shut down by the Battle Jacks Relief pitching. They gave up no earned runs over the course five innings, striking out five and only allowing six runners to even reach base. Caleb Lenoux, Jeremiah Newman, and Nick Davies round out the three headed monster that was so phenomenal. Newman went three innings, striking out four. Lenoux and Davies both went one inning allowing no damage.

The bats were working, just not in the same way they had been. They weren’t able to string hits together, leaving 10 runners stranded on base. Their two runs came in the second and fourth on an RBI double from Dillon Kark, scoring Aaron Dolney and RBI single from Rafael Gomez Jr., scoring Isaiah Gibbs, respectively. In the bottom of the seventh, the cardiac Jacks looked to work their magic again, but with the bases loaded, they were unable to push across the runs needed. Joey Grabanski had a good game at the plate going 2-4 with a single and a double. Billy Hancock also was successful at the dish going 2-3, with a walk.

The Battle Jacks remain in first with Kenosha losing to Rockford. They will now head to Kenosha for two games with the chance to extend their division lead. First pitch for Friday, June 10th is scheduled for 7:05 eastern.