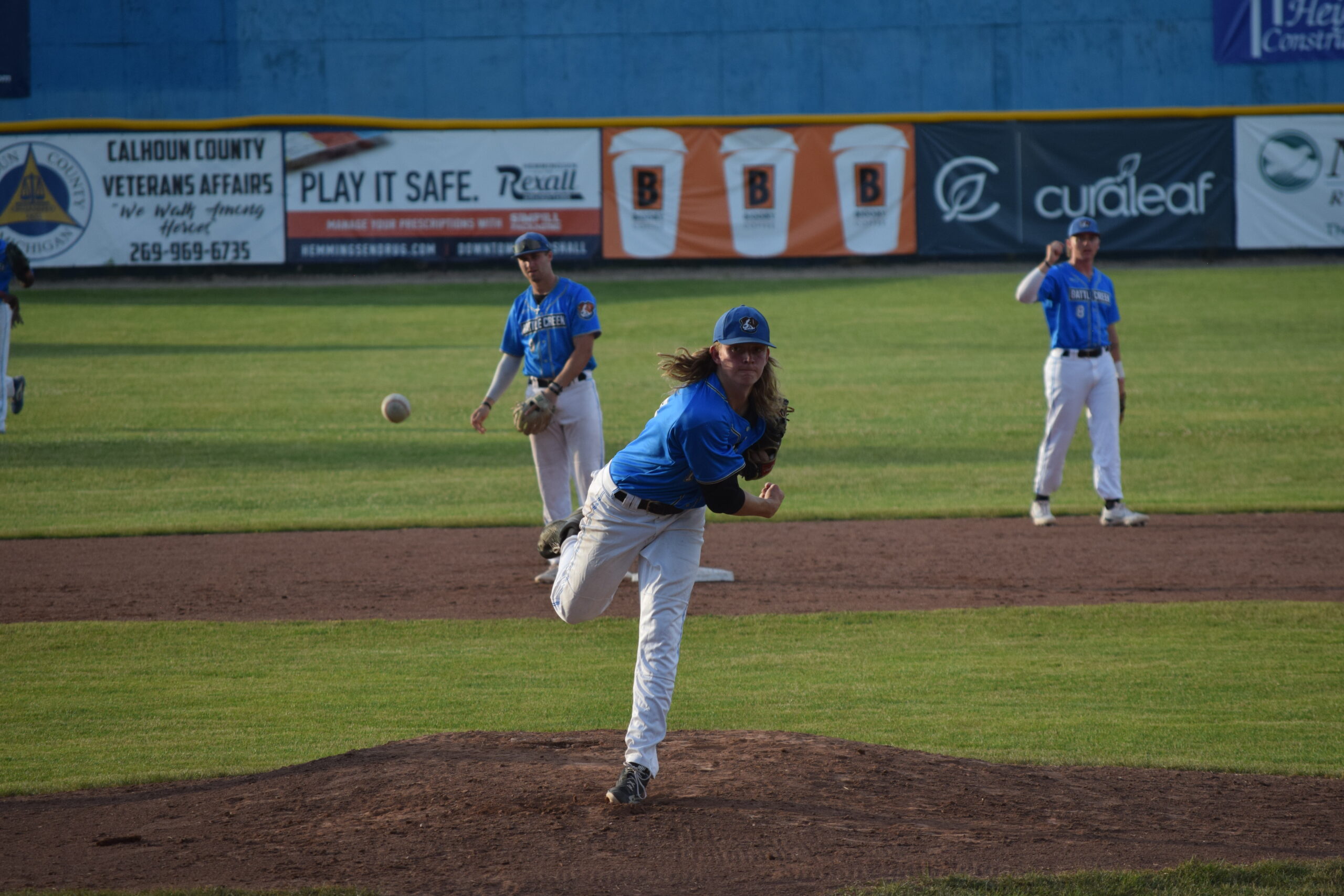 Nate Ross in his first start as a Battle Jack (Article by Brendan Nordstrom, photo by Melissa Vozar)

Battle Creek, MI – In a battle between the first-place Battle Jacks and the last-place Kokomo Jackrabbits, the underdogs came out on top with a 7-6 victory in favor of Kokomo. In a game that saw everything from 26 combined hits to an ejection, the Jackrabbits even the season series at two apiece.

The Jackrabbits struck first in the top of the first as right fielder Alejandro Holguin reached on an error to third baseman Fisher Pyatt setting up designated hitter Carlos Hidalgo. Hidalgo hit a single to right to plate the game’s first run.

The Battle Jacks then started to rev up their offense scoring a run in the bottom of the second due to an RBI double by catcher Gabe Sotres. In the bottom of the third, Battle Creek crossed another run after left fielder Jace Matkin ripped a double off the “Dog House” sign in left field. This gave BC a 2-1 lead.

Falling behind, the Jackrabbits hopped back in front with a massive fifth inning that would cross five runs, including four hits, an error, and three hit-by-pitches. Kokomo’s Luke Sartori and Matt Aribal hit back-to-back doubles to score one. Starting RHP Nate Ross recorded two outs before relieving LHP Gavin Knust allowed another double. An E6 loaded the bases as Knust then hit Kokomo’s Angel Galindez, allowed a single to Luke Hanson, and hit Kyan Lodice. The Jackrabbits then took a dominant 6-2 lead.

The tables turned and for the first time in four games, Battle Creek found themselves on the tail end of a four-run deficit. They chipped away two runs in the bottom of the fifth as back-to-back walks started the inning and first baseman Joey Grabanski hit an RBI single up the middle. Matkin then plated Grabanski with another RBI double to left field. In the bottom of the sixth, Sotres hit his second double of the day and second baseman James Canar roped his first triple over the head of Holguin. Center fielder Bobby Nichols was ejected after a strikeout and Canar scored on a wild pitch in a chaotic inning that tied the game at six.

That would be enough to win the game as Battle Creek could not respond in the rest of the contest with their final six outs all coming as strikeouts.

Between both teams, there were 16 strikeouts and 13 extra-base hits in what waffled between a pitcher’s duel and a slugfest.

Standouts at the plate for the Battle Jacks include a 2/4 day with 2 doubles and an RBI for Gabe Sotres, a 2/4 outing with 2 doubles and 2 RBIs for Jace Matkin, a 2/4 performance for Patrick Mills, and another 2/5 day from Joey Grabanski.

The Battle Jacks will return to MCCU Field tomorrow for a fierce matchup against the 11-10 Kenosha Kingfish at 6:35 p.m.