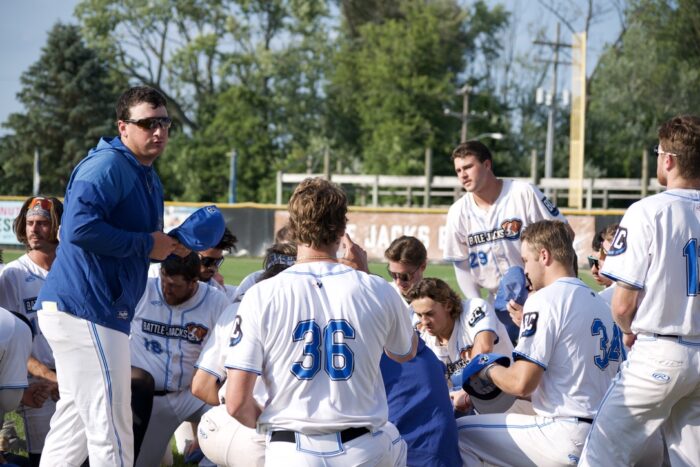 The 2022 Battle Jacks in a huddle (Article by Brendan Nordstrom, Photo by Melissa Vozar)

ROCKFORD, IL — In the final game of the regular season, the Battle Creek Battle Jacks (35-37) defeated the Rockford Rivets (37-35) at Rockford Stadium by a score of 6-5.

It was all Rockford to start as the Rivets put up a crooked 3 runs in the bottom of the first inning. Bryson Parks scored on a sac fly and Joseph Stagowski hit an RBI double to left field to cap off the inning.

Battle Creek immediately answered in the top of the second as Raymond Hilbrich reached on a walk and Jace Matkin reached on an error. Jimmy Wressel hit a huge 2-RBI double to left field. The Battle Jacks were not done, however, as Evan Borst scored Wressel and Brycen Sherwood on a 2-RBI single.

The scoreboard remained quiet until the Rivets tacked on a run in the fifth when Bryce Vincent scored following a double play. The Rivets scored another in the seventh thanks to RBI single by Gino Gazzillo.

With a 5-4 lead, all Rockford had to do was shut down Battle Creek in the top of the ninth. Wressel started the inning with a HBP, and James Canar advanced him to third on a double to left field. Evan Borst tied the game up after a pitching change thanks to a sac fly. Charlie Rhee followed it up with an RBI single to right field to take the lead.

Brayden Childress shut down the Rivets in order in the bottom of the ninth to cap off the season with a win.

The Battle Jacks return to action in May of 2023! It has been a fun and exciting first season and we hope to see you fill MCCU Field next season. As always, go Battle Jacks!