Woodchucks Make an Impact in the Wausau Area

Wausau, Wisc. – The Wausau Woodchucks and team owners Mark and Donna Macdonald were able to once again give back to the community through partnerships with local businesses, donations in kind, and fundraising programs during 2022.

The Woodchucks supported game-day initiatives to raise money for certain causes in partnership with local businesses. In 2022 the Woodchucks raised $15,000 for these causes. Each home run scored by a Woodchucks player raised money for the Women’s Community courtesy of K-Tech Kleening totaling $3,000. Every time a Woodchucks player was walked, money was raised for JDRF in partnership with Crystal Finishing Systems Inc. with a grand total of $10,000. In addition, each time the clean-up hitter brought in a run, a donation was made to the Jireh Food Pantry through the Executive Cleaning Clean Up Hitter program, with a total of $2,000 being donated this season.

In addition, the Woodchucks worked with local youth sports teams, bands and nonprofit groups for fundraising efforts. This includes a ticket package that organizations can sell with a certain amount going back to their organization. Over $8,500 was raised for these groups during the 2022 season.

The Woodchucks also had game day initiatives to support various groups in the Wausau community. This included the WisDOT Hometown Hero of the game which brought a local police, fire, first responder, Military members, childcare workers and more to a game to be recognized on field for his or her service.  At every home game there was also a Cellcom Field of Dreams Team of the Night, providing local youth baseball, softball and dance teams with the opportunity to attend the game free of cost and to join the Woodchucks players on the field during the pre-game ceremonies. There was the Connexus Credit Union Organization of the Night as well, which brought local groups such as Marathon County Humane Society, Habitat for Humanity, Community Center of Hope, Bridge Street Mission, and more to Athletic Park with complimentary tickets to a game.

The Woodchucks wore specialty jerseys two times this year, which were then auctioned and raffled off to raise money for the Safe Kids Program and Big Brothers Big Sisters. Over $6,000 was raised in total through the specialty jersey sales.

During 2022, the Woodchucks gave back to the community with over $1,000 worth of in-kind donations to various local causes. The team mascot, Woody Woodchuck, made multiple appearances to community events varying from fun runs, walks, school assemblies, community celebrations and more.  The Woodchucks also hosted several field trips for school and community organizations throughout the season. Additionally, Woodchucks players, coaches and staff helped to host three youth baseball clinics in partnership with Wisconsin Chevy Dealers, with over 500 youth baseball and softball players in attendance. 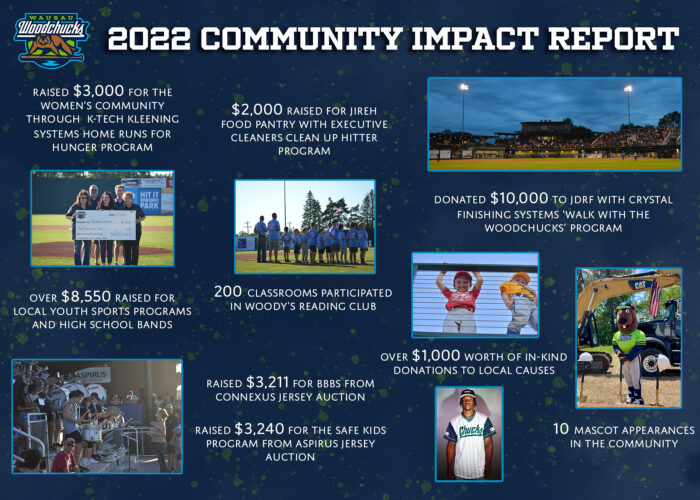