Wausau, WI – In addition to the long-term economic impact that the multimillion-dollar renovations have had since 2014, the Woodchucks also have a yearly impact on the Wausau area’s economy.

During the 2022 season 43,957 people attended Woodchucks games at Athletic Park. Approximately 6% of these fans were from out of state, coming from 25 different states, not including Wisconsin, with the most out of state visitors coming from Minnesota, Michigan, and Illinois. Even within Wisconsin, Woodchucks fans travel to Wausau from all over with fans coming from south of Milwaukee to north of Bayfield. While most of our fans were from the Wausau area, 3%, of Wisconsin based fans came from north of Highway 8 and another 2% were from the Fox Valley area. It is likely that many of Woodchucks game attendees coming from further distances spent additional time and money in the Wausau area.

Another way the Woodchucks contributed to our local economy was by choosing to use local companies as vendors for items like stadium signage, apparel, concession items and transportation. This focus on using local vendors started with the stadium renovations, in which 90% of the $10 million of construction contracts were awarded to local contractors. In total these local vendor relations infused the local economy with over $300,000 in 2022 alone.

A large way the Woodchucks had an indirect economic impact on the Wausau area was by updating their brand back to the Wausau Woodchucks. Now, whenever the team travels to their away games those fans are all seeing the name Wausau on the players’ jerseys. Another benefit of the new branding is that when the Northwoods League scores are scrolling on channels such as Bally Sports North, the team’s name now shows as ‘WAU’ as opposed to ‘WIS’ as it has previously. It’s another way the Woodchucks are putting Wausau on the map.

The Woodchucks look forward to continuing to strengthen the local economy for many years to come. The team will start their 30th season in Wausau in May 2023. 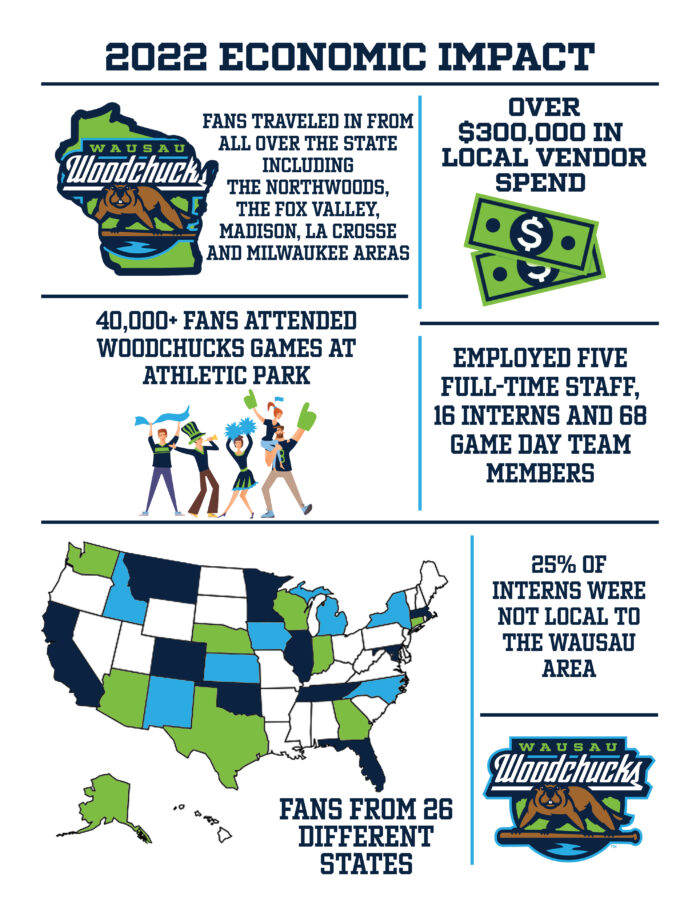