The Northwoods League Webcasting Team of the Year award is presented to one team in the League that is considered to have consistently performed the best overall, across all facets of video productions and broadcasting during the season. “This is the first time the Wausau Woodchucks have received this award and we are happy to recognize the organization for their excellent work in the video production and broadcasting category during the 2022 season – it is well deserved. Winning this award is a credit to the organization and all the video production crew members. Congratulations to the Wausau Woodchucks,” said Northwoods League, Great Plains Division President, Glen Showalter.

Excelling in Northwoods League team broadcasting operations and performing at a level which results in winning one of the annual webcasting awards, typically requires a team to be proactive throughout the year, from the start of the hiring process late in the year through the training months and weeks prior to the season start. It requires good teamwork, collaboration, and engagement throughout the season to continuously improve broadcasting operations as well as to correct deficiencies and issues quickly.

The Woodchucks couldn’t be prouder of the entire webcast team from this past season for their hard work that led to the great accomplishment of being honored with the 2022 Webcast Team of the Year Award. Each of the members played a vital role in ensuring a quality webcast for every game.

Jake Herman, the voice of the Woodchucks, brought enthusiasm and great knowledge to every game.

Jarron Biebl was a phenomenal Camera Director, using his communication skills and understanding of baseball to ensure the camera operators were prepared for whatever came next in the broadcast and used their equipment correctly.

Computer Director Brenton Kniess learned the technical side of the webcast and was able to stop problems before they happened and worked with Jake to create a clean and professional pre-game show.

Sydney Noel was the Head Camera Operator and made sure fans watching from home could always track what was happening during the game. Additionally, Sydney learned all the positions for the webcast and filled in everywhere as needed at a high level.

The Woodchucks would also like to recognize the gameday camera operators, Elliott, Maverick, Genna, Caleb, and Nick for their hard work that was vital to the webcast. 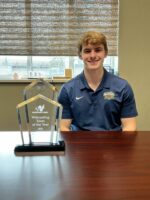 The webcast team was led by Ryan Malone, the Creative Services & Marketing Manager for the Woodchucks. Ryan oversaw the entire Webcast team, teaching them the foundations of webcasting, and led them through each game day. “I couldn’t be happier for everyone involved, I can’t think of a more deserving group of people and am excited to see what each of them have in store for their future careers.” said Ryan Malone.

The Woodchucks are looking for skilled individuals who are interested in joining next year’s webcast team. Apply for the Multimedia & Video Internship here!