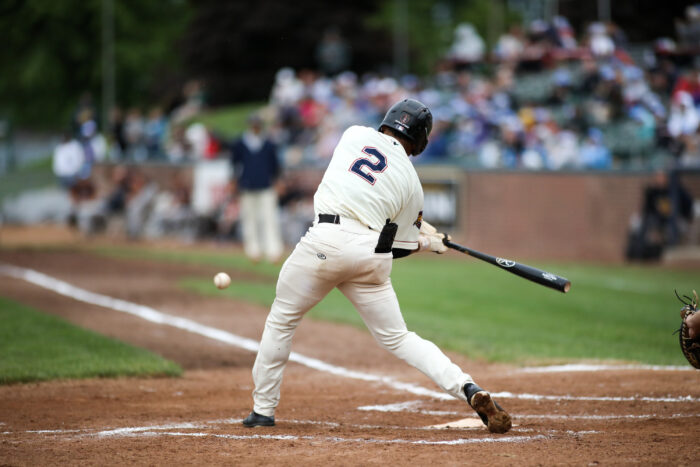 Kenosha Gets Bats Going Too Late In Game

The Kenosha Kingfish dropped game two against the Battle Creek Battle Jacks 10-4 after allowing 10 unanswered runs to start the game.

After blowing the Battle Jacks out 12-2 on the previous night, the Kingfish put up four runs on five hits to Battle Creek’s 10 runs on 11 hits.

Battle Creek left-hander Justin Graves (1-0) had a superb start, as he gave up no earned runs, three hits and two walks while racking up eight strikeouts in 7 innings for the win.

Kingfish right-hander Tyler Banks (0-1) saw his day end early after giving up four earned runs on four hits and two walks while striking out four in 3 innings of work.

The Battle Jacks set the tempo in the first frame, as Jace Matkin hit Fisher Pyatt and Patrick Mills home on a double to center field. The visitors tacked on an extra run to end the frame 3-0 when  Matkin ran home on an error off the bat of Robbie Merced.

Fisher Pyatt hit a bloop single to right field to keep the scoring going in the second inning, as he sent Dillon Kark home to make it a 4-0 ball game.

In Merced’s second at bat in three innings, he sent a no-doubt into the Fish Bowl in left field to end Banks’ outing at three innings.

Mills got it going in the fourth inning, as he hit a double to right field that plated Rafael Gomez Jr. to make the game 6-0.

Mills hit an RBI single in the sixth inning to plate Gomez Jr. and make the ball game 7-0.

In the seventh, Isaiah Gibbs hit Matkin and Billy Hancock home on a single to center to score two before Mills walked Gibbs home with the bags loaded. This made the game 10-0.

The Kingfish bats awakened in the eighth frame on an error off the bat of Antonio Brown that scored Anthony Mangano. After Parker Stinson walked, Brady Counsell stepped up and bombed his first home run of the summer over the left field wall to send Stinson and Michael Dallas trotting home and make the game 10-4.

Mills led the Battle Creek bats going 2-for-3 with three RBI’s, a run and two walks on the evening.

Counsell paced Kenosha at the plate by going 1-for-3 with a home run, three RBI’s and a walk.

The Kingfish (7-5) will hit the road to play the Wisconsin Rapids Rafters (11-1), who have won 11 straight contests, for a two game series.