Ryne will be entering his sixth season as a full-time Kingfish employee in 2023 as the General Manager. He will work with corporations to organize group outings along with employee entertainment options.

Prior to joining the Kingfish, he spent the previous two years running his own insurance agency. During his time as an agent he sold all major lines of insurance and worked with an array of people ranging from owners to families. Also, in 2014 he was an operations intern for the Kingfish in the club’s inaugural season. His father, Steve Goralski worked for the Milwaukee Wave so Ryne grew up in the sports industry, from the ages of 10-17 he was a game day assistant to Milwaukee Wave Athletic trainer, Larry Sayles.

Ryne graduated from the University of Wisconsin Parkside in 2016 where he earned his degree in Sports Management along with gathering his coaching certificate. During his time at Parkside he also competed on the Cross Country and Track teams. Ryne is a die-hard Milwaukee Brewers fan along with the Milwaukee Bucks, Packers, and Badgers. In his free time he coaches basketball for St Joseph Catholic Academy in Kenosha, and spends time with his nephews Zachary and Caleb along with his niece Zoey. Justin will be entering his second season with the Kingfish overseeing all marketing, graphic design and social media efforts.

Prior to joining the Kingfish, he spent a few summers with the La Crosse Loggers where he fell in love with the game of baseball and the Northwoods League. In college, Justin was a key member of the sports information team for the UW-Eau Claire athletic department where he managed social media, wrote game recaps and designed program covers.

Justin graduated in 2018 from UW-Eau Claire with a Bachelor’s Degree in Journalism.  In his free time, he enjoys watching sports, staying involved at his local church and exploring the Kenosha area with his wife. He also cheers for the strangest combination of sports teams – Chicago Cubs, Atlanta Falcons, Chicago Blackhawks and Wisconsin Badgers. Layla will be entering her second season with the Kingfish as the Corporate Account Manager. She assists corporations in organizing group outings and employee entertainment options.

Prior to joining the Kingfish, she spent two years with the National Basketball Retired Players Association as an event coordinator. Before that, she worked with the Commercial Association of Realtors – Wisconsin and the Milwaukee Brewers.

Layla graduated from the University of Wisconsin – Whitewater in 2016 where she earned her Bachelor of Arts in Communication with an emphasis in Public Relations and minor in Journalism. Being a Milwaukee native, she is passionate about all Wisconsin sports teams. 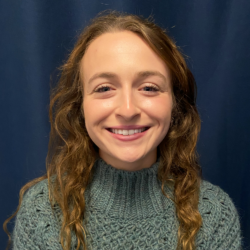 Delanie will be entering her first season with the Kingfish as the Community Engagement Coordinator. She will assist the Kingfish in partnering with local organizations and managing the Lil’ Fish Reading Program. Prior to joining the Kingfish, she spent two seasons with the Rockford Rivets in the Marketing department. Delanie graduated from Michigan State University in 2022 with a Bachelor’s Degree in Advertising Management with a minor in Health Promotions. In her free time, she enjoys cheering on Michigan State Football and the Detroit Tigers. Spencer will be entering his second season with the Kingfish overseeing inside ticket sales.  He will assist Kingfish fans with ticket plans and group outings.

Prior to joining the Kingfish, Spencer spent time in the Cleveland area with the Browns and Cavaliers in their ticket and fan service departments.  Spencer also spent time in the baseball industry working for the Triple-A Buffalo Bisons for five seasons.
Spencer graduated in 2020 from Baldwin Wallace University with a Bachelor’s Degree in Sport Management with a minor in Athletic Coaching.  While in school, he also ran cross country and track.  In his free time, he enjoys cheering on the Buffalo Bills and Detroit Tigers.  Spencer looks forward to meeting people in the Kenosha area and making it his new home.
Email: spencer@kingfishbaseball.com Andrew will be entering his second season with the Kingfish overseeing all stadium and field operations during the season, and assisting with ticket sales in the off-season. He previously worked with the organization as an field operations intern in 2021. With more than 23 years of experience in minor league baseball front offices, Bill will be entering his second season with the Kingfish in 2023. He has spent time in the front office of MLB affiliated minor league teams ranging from Triple-A to Single-A, and 12 years as Vice President and General Manager of the St. Paul Saints of the Independent Northern League.
Bill has made stops in Denver, CO, Wichita, KS, and Spokane, WA in affiliated baseball, helping set attendance records at every stop. His promotional philosophy is to push the envelope a little, while respecting the game, ensuring that there will be something for everyone to enjoy at Simmons Field this summer. In addition to his experience in minor league baseball, Fanning has operated a baseball consulting business for the past 3 years, working with a number of baseball organizations to increase attendance and provide their fans with an enhanced ballpark experience.
Bill, originally from Denver, currently lives in the Twin Cities area with his wife, Donna and six adult children who all continue to live in the area. Mike enters his second season with the Kingfish in 2023 as part-owner along with life-long friend Bill. Mike is the Managing Director of ZF Capital, a Colorado based company focused on developing and acquiring multifamily and mixed-use properties. The company also has a lending platform and an alternative asset portfolio. Prior to forming ZFC in 2017, Mike was a founding partner of RedPeak Properties (15 years) and Legacy Partners (formerly the western region of Lincoln Property Company) for 17 years.

During this time, Mike was responsible for apartment operations and development in the Rocky Mountain Region, including the construction and management of over 70 apartment projects totaling over 11,500 units.