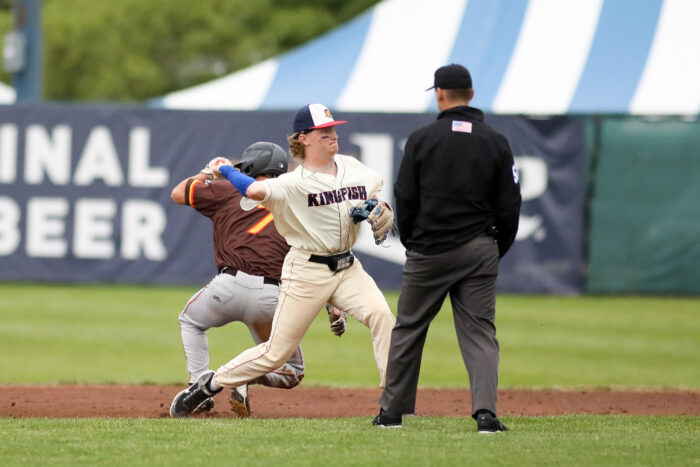 The Kenosha Kingfish broke the hearts of the Traverse City Pit Spitters in a 7-6 victory in the second leg of a double header Wednesday.

With the win, the Kingfish have now won three contests in a row.

Traverse City kicked off the scoring in the top of the first frame with an RBI single by Colin Summerhill that scored Christian Beal and a two-RBI single by Camden Traficante that plated Summerhill and Jake Smallwood. This made the game 3-0.

The Pit Spitters kept it rolling in the third inning when Smallwood walked Tabb in with the bases loaded to score the team’s fourth unanswered run of the game. Michael Dallas got the scoring going for the Kingfish with his first homer of the year to make it 4-1 after three frames.

Traverse City tacked on two more runs in the fourth inning courtesy of an Ariel Garcia single (scoring Camden Traficante) and a wild pitch that scored Trey Truitt III. Kenosha responded with a Jacob Tobias RBI single that sent Ian Collier home. Tobias went around to score on a double play to make the game 6-3.

The Kingfish continued their crawl back in the fifth, as Taylor Darden sent Brady Counsell home on a double and James McCoy hit Darden home on a single to bring the contest to 6-5.

The comeback was completed in the sixth frame when Counsell plated Mangano on a sacrifice fly and Darden hit Dallas home with the go-ahead single to give Kenosha a 7-6 lead.

Grayson Thurman secured his NWL-leading sixth save when he retired Traverse City in order in the ninth inning.

Jesse Wainscott (1-0) celebrated his birthday with a win on the bump, as he allowed no runs on three hits with four strikeouts in 2.1 innings. Duncan Lutz (0-1) dropped his first game of the year after giving up two runs on two hits and two walks while striking out one batter through 1.2 innings.

Will Baker got the no-decision for Kenosha after giving up three runs, three hits and two walks with two strikeouts through 1.2 innings. Joe Horoszko gave up five runs on five hits and no walks while fanning five hitters through 4 frames for a no-decision as well.

Darden led the Kingfish bats, as he went 2-for-4 with a run, two RBIs and a double.

Traficante paced the Pit Spitters offense, as he got on base twice in five opportunities and had a pair of RBI’s.

The Kingfish round out the four-game series with the Pit Spitters on June 16 with the first pitch being at 6:35 p.m.