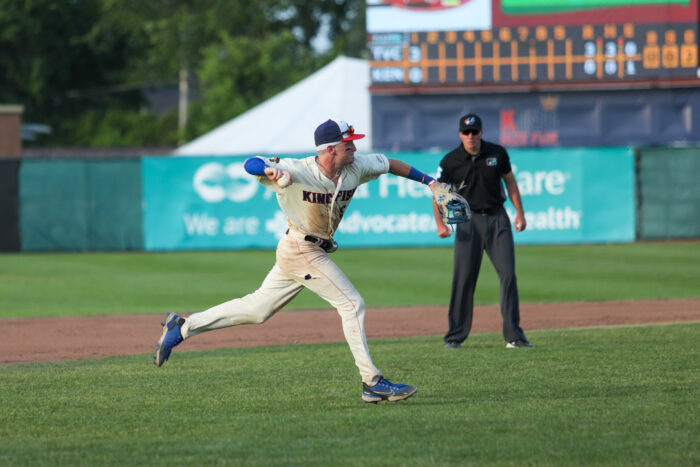 The Kenosha Kingfish fell to the Kalamazoo Growlers 8-4  to wrap up the home stand Monday night.

With the loss, the Kingfish have now dropped four consecutive games, and  the Growlers have won seven. This was also the first time the team has dropped a series at home all season.

Edgardo Villegas gave Kalamazoo an early lead when he hit a two-run double to plate Colton Coca and Daniel Pruitt in the top of the second frame. Kenosha native Josh Leslie evened everything out in the bottom half when he hit a missile over the left-center wall that sent Anthony Mangano trotting home with him.

Trey Lipsey hit a sacrifice fly out to center that sent Coca home to give the Growlers a 3-2 lead in the top of the fourth.

Kalamazoo extended their lead to 6-2 in the sixth frame after singles by Griffin O’Ferrall (scoring VIllegas) and Ryan Dykstra (scoring O’Ferrall and Anthony Stephan).

Kenosha got one run back in the seventh when James McCoy scored Taylor Darden on an RBI groundout to make it 6-3.

The Growlers extended their lead in the eighth when Coca hit Luke Storm home on a flair single, and they tacked on one more insurance run in the ninth when Storm plated O’Ferrall on a single of his own. The Kingfish started a ninth-inning rally with consecutive base hits by McCoy (triple) and Jacob Tobias (double, scoring McCoy), but the Growlers retired three of the next four batters to complete the sweep.

Villegas led the way for the visitors on offense, as he went 2-for-3 with a double, a run and a pair of RBIs on the evening.

Tobias got on base four times out of five for Kenosha, as he went 2-for-3 with a double, two walks and an RBI.

Lefty Travis Bensmore (1-1) got the win at Historic Simmons Field, as he gave up two runs, seven hits and three walks while striking out four in 5 innings of work.

Clark Candiotti (1-1) had his shortest start in a Kingfish uniform to take the loss, as he allowed three runs, seven hits and three walks while striking out five in 3.2 frames.

Kenosha (11-11) is in third place in the Great Lakes East division, and they sit 1.5 games behind Kalamazoo (12-9), the new division leaders.

The Kingfish will start off a two-game set against Battle Creek on June 22. The first pitch is at 6:35 p.m. EST.