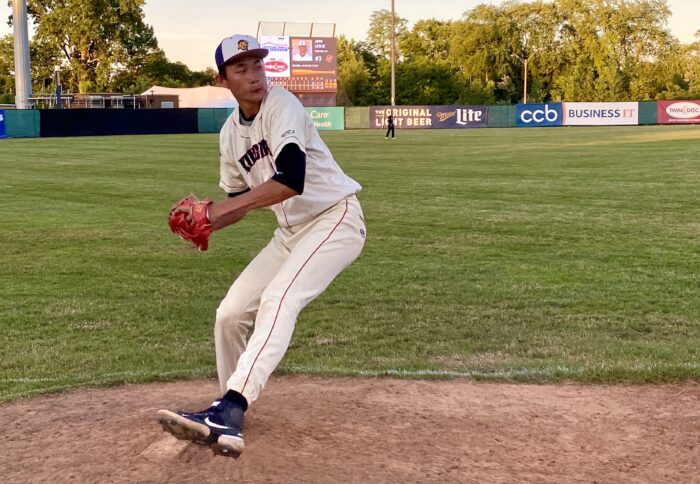 Taking the field for a new summer baseball team is a new experience for every player, but Taiwanese right-handed pitcher Chen-Wei Lin takes that concept to another level.

Lin is the first international player to take the field in a Kenosha Kingfish uniform since the start of the organization in 2014. Lin stands at 6-foot-8 and has a fastball that sits in the mid-90s with arm side movement.

The 20-year-old pitcher has played in the Chinese Professional Baseball League (CPBL) and represented Taiwan at the U-23 Baseball World Cup last year. He posted a 4.50 earned run average (ERA) while striking out three hitters in 1.2 innings of work.

Lin’s talent and potential caught the attention of Kingfish field manager Sean McSheffery before the start of the 2022 season.

“I received a call about him and called a few international scouts and kept hearing a lot of great things,” McSheffery said. “After hearing the same thing several times, I thought it was a great opportunity for both sides. He has an electric fastball with a great change up that makes him very effective. Lin is a tremendous kid who loves baseball and loves his teammates.”

His uncle, Hung-Chih Kuo, pitched in relief for the Los Angeles Dodgers for seven years from 2005-11. He finished with a 3.73 ERA in 218 career appearances.

Lin said they have had conversations about the majors, and he gives Kuo credit for helping with his growth on the mound.

“He told me [about] a lot of his experience,” Lin said. “It helped make me become a better player.”

Upon his arrival, Lin and his teammates quickly bonded and got to work on the field. The Taiwan native said he has had a positive experience in his first days playing baseball in the United States.

“Everyone treats me well and also helps me a lot,” Lin said.

Lin made his first appearance for the Kingfish on June 20 and gave up one run, one hit and struck out three batters in 1.1 innings against the Kalamazoo Growlers.

McSheffery said Lin will be utilized as a starter and reliever during his time on the team. Even after his first few days in America, the young star said he is adjusting and learning as much as he can about his new environment.

“I feel good now,” Lin said. “[I’m trying] to learn more about the American culture and trying to integrate into it.”