1920: Simmons Field opened in Kenosha with a seating capacity of 7,000, due to the Simmons Bedding Company’s baseball team’s need for a field. The park allowed for growth of the company’s Simmons Bedmakers team and provided a suitable venue for the city’s flourishing baseball rivalries. The 1919 Chicago White Sox — the team later known as the Black Sox — even made plans to play against the Simmons team during the summer of 1920. However, a fire destroyed the wood grandstand in the stadium’s inaugural season. Rumors persist to this day that members of the rival Nash Motor Company team started the Simmons Field fire.

1947: The Simmons Company sold the field and Kenosha made it available for use by the city’s women’s professional baseball team, the Kenosha Comets, in 1948. The Comets, of the All-American Girls Professional Baseball League (AAGPBL), the league made famous by the 1992 film “A League of Their Own”, had played in Kenosha at Lakefront Stadium since the league was founded in 1943. The team played at Simmons Field from 1948 until their final season in 1951.

The Kenosha Twins played at Simmons Field for nine years, winning two Midwest League championships and producing more than a dozen major league players, including four players on the Minnesota Twins 1991 World Championship team. That World Championship team included American League Rookie of the Year Chuck Knoblauch and long-time Kenosha resident and previous UW-Parkside head coach, Jarvis Brown, who played for the Kenosha Twins in 1987 and 1988. Current Kenosha Kingfish Manager, Duffy Dyer, managed the team in 1984 and 1985, winning the Midwest League Championship in 1985. Current Carthage College head baseball coach Augie Schmidt also played at Simmons for the Twins in 1986, before retiring from professional baseball. Lee sold the team after the 1991 season and new ownership moved the team to Fort Wayne, Indiana after the 1992 season. The Kenosha Kings, a local semi-pro team, also took up residence at Simmons Field in 1984. The Kings currently compete in the Wisconsin State League and won the league’s championship in 2006. The Kings are currently in the longest run of consecutive seasons of any team to play at Simmons Field.

1990s: Simmons Field was home to amateur teams of high school and college talents, as well as the Kings. The locally-run Kenosha Chiefs semi-pro team also was the stadium’s primary tenant in 1993, and the Kenosha Kroakers of the collegiate summer Northwoods League called Simmons home from 1994 to 1999.

2000: AAGPBL players returned to Simmons Field for a reunion and dozens of the former players dedicated a plaque to commemorate the AAGPBL’s time in Kenosha. The Kenosha Comets plaque remains standing at a newly renovated Historic Simmons Field today. 2003: Simmons Field was home to professional baseball team Dubois County Dragons, of the independent Frontier League, when they moved and became the Kenosha Mammoths. However, the Mammoths failed to attract large crowds and the team moved again after one season in Kenosha.

2007: The Kenosha Parks Department leased Simmons Field to the Kenosha Unified School District (KUSD). KUSD leased the field to the Kenosha Simmons Baseball Organization (KSBO), a non-profit group working to upgrade and restore the stadium. Initial improvements included a rebuilt infield, which was completed in the fall of 2007, and a new electronic scoreboard behind left field. The stadium was then purchased by the Kenosha Kingfish in 2013.

2008: The Men’s Senior Baseball League (MSBL) of Kenosha organized the 2008 Women’s Hall of Fame Classic. This event hosted a large contingency of the AAGPBL players in a rededication of Simmons Field to women’s baseball. The event provided the best female baseball players in the country the opportunity to tryout for positions on the US team competing in the 2008 World Cup Games in Japan. The event was capped off with a five team international women’s baseball tournament featuring the Aussie Hearts, Chicago Pioneers, Nashua Pride, New England Red Sox and Washington Stars. The tournament was won by the Aussie Hearts coached by Kenosha native Rob Novotny.

2013: Simmons Field has recently become home to the Kenosha Kingfish, playing their first season in the summer of 2014. The Kenosha Kingfish are one of 18 teams in the Northwoods League, featuring minor-league style entertainment and the top college baseball players from across the nation. The Kenosha Kingfish ownership group also owns three other teams in the Northwoods League, the Madison Mallards, the Wisconsin Rapids Rafters, and the Green Bay Bullfrogs. In partnership with the City of Kenosha, more than $1 million was invested to help restore the 83 year-old Simmons Field. The newly renovated stadium features over 2,100 major league stadium seats from Camden Yards, home of the Baltimore Orioles. The new facility also features several corporate hospitality areas, a party deck and a general admission lawn seating area. The Kenosha Kingfish had their inaugural season home opener on Saturday, May 31st, 2014.

2014: The Inaugural season was nothing short of successful for the Kenosha Kingfish. They finished 41-30 overall in the season, claiming the number three spot in the South Division, only a half game behind second place. The Kenosha and surrounding areas embraced the Kingfish like no other, helping the Kingfish take the number eight spot in the national ranking of attendance per games in summer collegiate leagues. The Kingfish averaged over 2,000 fans per game.

Despite its changes through the years, Simmons Field retains its classic feel. The historic grandstand behind home plate looks much like it did during the days of the AAGPBL and still evokes memories of the baseball greats who played in front of it. 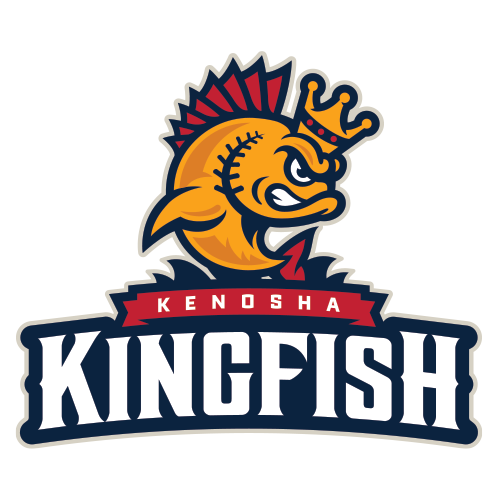 Catch the latest Kingfish exclusive deals and news delivered straight to your inbox.