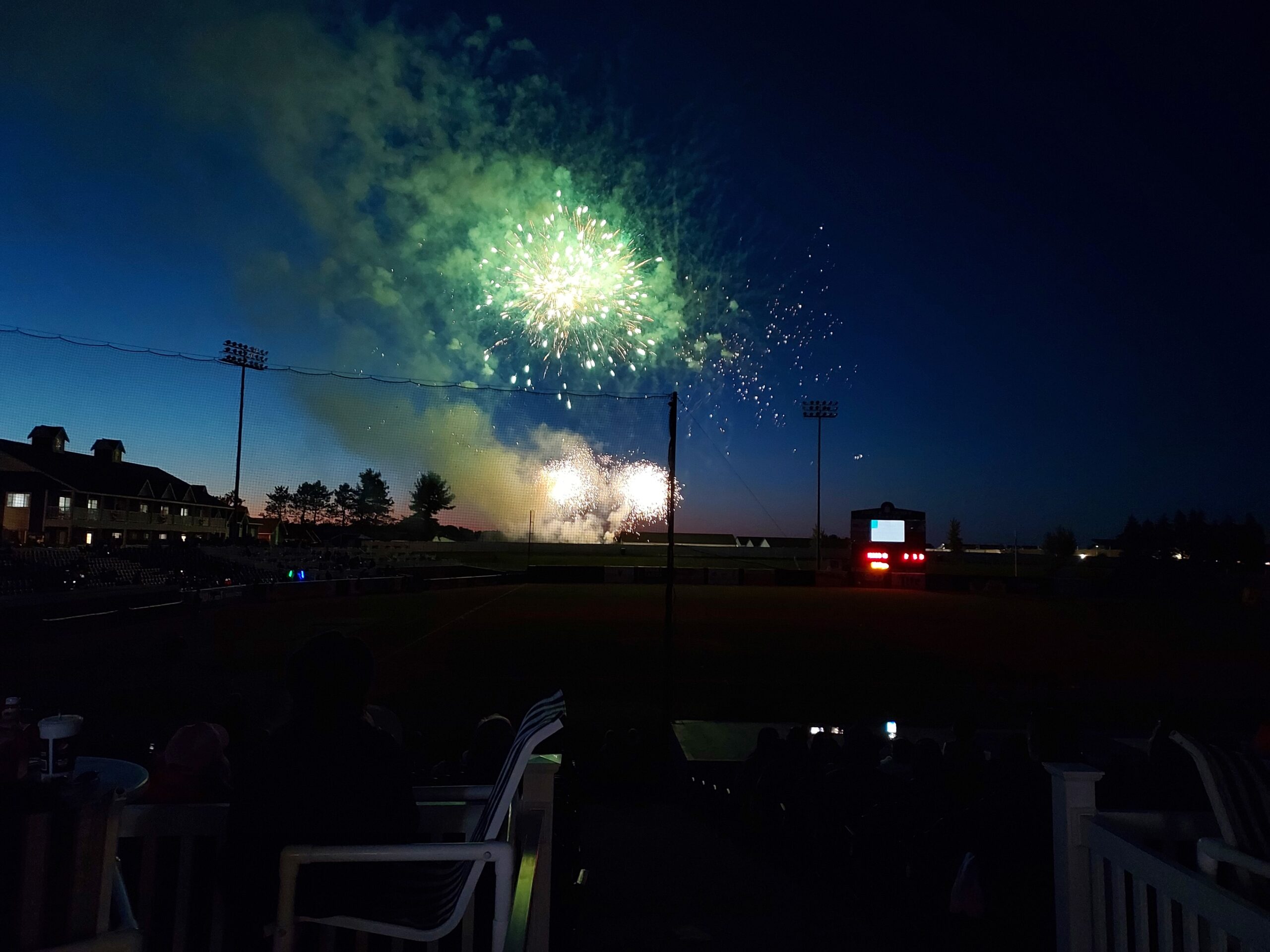 TRAVERSE CITY, MI. – In a matchup that showcased top notch pitching from both sides, the Battle Creek Battle Jacks (3-2) squared off against the Traverse City Pit Spitters (1-4) for the third time in the young season. The Pit Spitters opening day began with a 2021 championship ring ceremony and ended with a fireworks show, but a 4-3 Battle Jacks win filled up everything in between.

Traverse City started Nate Blain on the rubber, who ended his 6.0 inning night with only four hits, one earned run, and six strikeouts. On the other side, Battle Jack’s ace Garrett Martin went 6.2 innings allowing six hits and three earned runs, but sitting seven down on strikes.

Battle Creek struck first in the top of one after debuting center fielder Bobby Nichols lined a single to right field and proceeded to steal second base five pitched later. This set up the red hot second baseman Fisher Pyatt for an RBI double down the right field line. This would be the fourth time in five games that the Battle Jacks scored a run in the first inning.

The Pit Spitters would answer in the bottom of the second as catcher Jake Smallwood, who had been struggling at the plate, hit a rocket off of the right field wall for a double. Traverse City center fielder Alec Atkinson then singled into left field to bring Smallwood home to tie it at one.

The third and fourth innings went 1-2-3 for both Blain and Martin who continued to deal. The fifth inning was not three-up-three-down, but the two pitchers continued to mirror each other, each allowing a single, but retiring the rest of the side.

The deadlock finally broke in the sixth as Pyatt hit another two-bagger down the right field line. First baseman Joey Grabanski worked a walk to set up shortstop Robbie Merced with two outs. Merced hit what should have been a routine groundball to end the inning, but Pit Spitters third baseman Jared Miller soared the throw over the first baseman’s head for an error that scored one. Traverse City leads the entire Northwoods League in errors as this one would prove costly to give BC a 2-1 lead.

Traverse City would not let the Battle Jacks get too far ahead with an answer of their own in the bottom of the sixth. Leadoff and designated hitter Evan Orzech clobbered a home run over the right field wall. Martin remained calm and collected, retiring the next three batters, two on strikeouts.

Pit Spitters pitcher Duncan Lutz came in relief of Blain in the seventh inning and faced three batters before Mitch White replaced him. Despite a leadoff walk and a pitching change, no damage was done to Traverse City.

In the bottom of the seventh, Smallwood stepped up to the plate in the leadoff spot before hammering a ball out of Turtle Creek Stadium to give the Pit Spitters their first lead of the day. Prior to tonight’s game, Traverse City had not hit a homerun this season, but this would be their second of the night. LHP Gavin Knust came in relief and shut down any further advances.

Staring down the barrel of their last six outs, the high-powered Battle Creek offense finally woke up starting with a walk by Pyatt and continued by a double by catcher Aaron Dolney. With runners at second and third and two outs, Merced was put in a tense spot, but answered the call with a bomb off the left field wall that was mistaken for a homerun. Regardless, the Battle Jacks scored two and retook the lead 4-3.

After Knust walked a batter and gave up a single to TC right fielder Trey Truitt III, the always clutch RHP Keegan Batka took the bump to close the door.

Battle Creek was unable to tack on any insurance runs against Pit Spitter sidearm slinger Coby Greiner setting the stage for a high-pressure bottom of the ninth. The inning began with Batka striking out Smallwood, who stared down strike three on the outside edge. Jared Miller, Traverse City’s second baseman, increased the threat level by singling into the left field gap. Atkinson stood at the plate as the winning run, but struck out swinging on one of Batka’s mid-90 fastballs. With Miller in scoring position, two outs, and two strikes, left fielder Cody Hultink struck out swinging to end the game 4-3 in favor of BC.

Scoring their lowest number of runs all season, the Battle Jacks pulled out the win with seven hits compared to Traverse City’s eight. It is the third time these two teams have met, each game ending by a one run differential.

Standouts at the plate for Battle Creek include Fisher Pyatt who went 2/4 with a pair of doubles and Robbie Merced who hit in the winning runs with a two RBI night.

The Battle Jacks will return to Turtle Creek Stadium in Traverse City tomorrow at 7:05 p.m. to close out the two-game series and their first road trip.