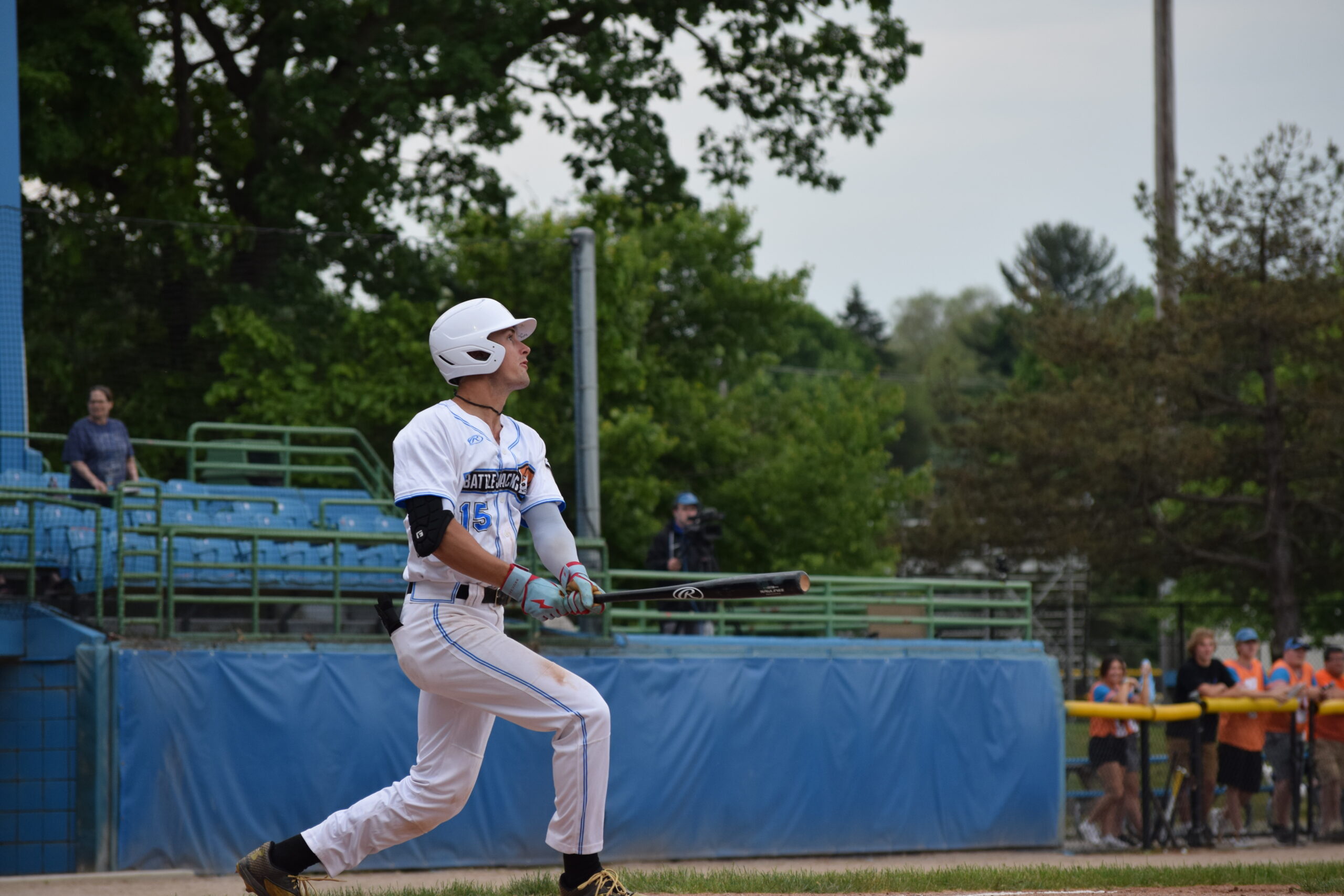 Patrick Mills, who had 2 hits in his final game as a Battle Jack (Article by Brendan Nordstrom, Photo by Melissa Vozar)

KOKOMO, IN — 73. That’s the number of runs the Battle Jacks have scored across their past 6 games as they have turned into nothing short of an offensive juggernaut across the stretch. The Battle Jacks (32-32) kept their foot on the gas, dominating the Jackrabbits (16-47) by a score of 13-4 on Friday night, winning both the 5-game series and the season series against their southern neighbors in one swoop.

Facing off against Kokomo’s starting LHP Nick Venegas, the Battle Jacks struck first in the top of the first. Evan Borst hit a hot shot to third that was mishandled allowing him to reach on an error starting the game. Patrick Mills, in his final game as a Battle Jack, added a hit to put Borst in scoring position, where Billy Hancock drove in his 37th run of the season on a sac-fly.

It was blink-and-you-miss-it scoring in the top of the second as Brycen Sherwood reached on a bunt up the middle and executed the hit-and-run with Charlie Rhee lining and RBI-double to left-center field. James Canar extended his hit streak to eight as he scorched his fifth double down the left field line. Mills got his second hit in as many innings with an RBI single to make it a 4-0 game.

James Canar started the fourth inning off with another line double, which was followed by a Borst walk. Mills advanced the runners as Billy “Triples” Hancock sent his fifth three-bagger to the left-center field wall scoring two. Dolney scored Hancock on a sac-fly, and it was 7-0 BC.

It was all Battle Jacks as they scored two more in top of the sixth thanks to Hilbrich’s third hit of the game, Sherwood reaching on an error, and an infield single from Rhee.

Battle Jacks SP Riley Mertl was fantastic in his outing as he went 6.0 IP, with 3 hits, 4 strikeouts, and, most importantly, allowing no runs.

Kokomo loaded the bases in the bottom of the seventh and were able to scratch off their zero off the board with a sac-hit. Max Farfan stepped in with two outs and answered with a monster triple to right-center field to plate a couple more.

With a 9-3 lead, the Battle Jacks were not satisfied, crossing four runs off the bat thanks to a passed ball to score Dolney and an RBI single from Sherwood. Grabanski scored on a passed ball and Sherwood scored on a sac-fly from Canar.

Kokomo kept the scoring going with another in the eighth inning, but BC’s Jack Westerhoff entered the game and left the bases loaded.

Standouts at the plate for the Battle Jacks include a 3/4 day with 2 doubles for James Canar, a 4-hit day for Raymond Hilbrich, 2/4 day with 2 RBIs for Brycen Sherwood, and a 3-RBI day with a triple for Billy Hancock.

The Battle Jacks will return tomorrow evening for game 4 of the 5-game series at 6:35 EST here at Kokomo Municipal Stadium.