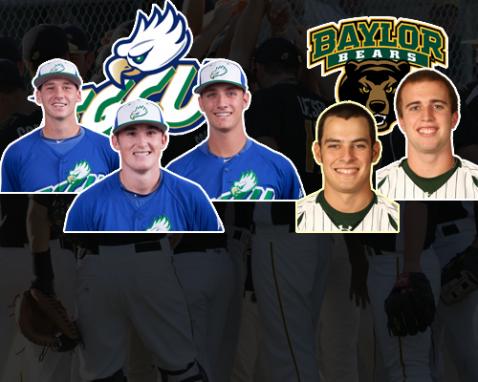 WILLMAR, MN- The Willmar Stingers this week have announced the signing of 4 more pitchers and an outfielder to the upcoming 2013 roster.  With these latest additions, the roster is now up to 23 players for this season, which will open up at 7:05 p.m. on Wednesday, May 29 against the Thunder Bay Border Cats at Bill Taunton Stadium.
Joining the team this summer are a pair of Baylor Bears, sophomore Joe Kirkland and junior Bobby McCormack.  A trio of Florida Gulf Coast Eagles will be joining the Stingers this summer, freshman Michael Murray, sophomore Zach Tillery, and freshman Colton Bottomley.
Joe Kirkland, a sophomore right-handed pitcher with Baylor, was rated in the Top 500 national prospects coming out of high school and was the 55th best prospect in the state of Texas.  In his freshman season with the Bears, Kirkland appeared in 7 games, throwing 7.1 innings and struck out 9 batters.
Fellow Bears teammate Bobby McCormack joins Kirkland as a member of the Stingers this summer.  Prior to coming to Baylor, McCormack played at Angelina Community College where he was named an NJCAA All-Star and picked up an all-conference nomination.  McCormack has appeared in 5 games this season, posting a 1.29 Earned Run Average and has an astounding .029 batting average against.
Stingers fans have grown accustom to seeing players from Florida Gulf Coast University swarm the Bee Hive over the previous seasons.  The 2013 season will be no different when Michael Suchy will be joined by 3 of his Eagles teammates.  “Florida Gulf has a strong program and we have been fortunate to bring quality players here to Willmar over the years,” said co-owner Ryan Voz.
Michael Murray, a freshman pitcher, has appeared in 9 games this season for the Eagles making 8 starts.  Murray has posted a 4-1 record, compiled a 2.92 ERA.  In 52 innings pitched so far in 2013, Murray has 25 strikeouts while only allowing 9 walks.
Zach Tillery, a sophomore infielder/pitcher, is hitting .284 this season with the Eagles.  Tillery has 10 RBIs in 81 at bats.  On the mound this season Tillery has made 6 starts, posted a 2-1 record, and has a 4.10 ERA.  Tillery earned Atlantic Sun All-Freshmen team honors in 2012 appearing in 52 games, making 51 starts between third base and pitcher.  Tillery finished with a .226 batting average with 13 runs scored and 18 RBI during his freshman season with the Eagles.
Colton Bottomley rounds out the trio of new Eagles to join the Stingers roster this summer.  Bottomley is a freshman outfield at Florida Gulf Coast.  Bottomley has played in 15 games so far as a freshman, making 13 starts.  In his 44 at-bats, he has only 4 strikeouts.  Bottomley was a 2012 Rawlings All-American, 2012 Broward All County and 2012 Louisville Slugger All American coming out of high school in Davie, FL.
The 2013 Stingers roster will be made up of 30 players from all over the country.  With these latest signings bringing the total 23, the remaining players will be announced in the coming weeks leading up to May 29th.
Season tickets for the 2013 season are $169 for reserved seat backs and $199 for the Gurley’s Foods box seats. Single game tickets for the Home Opener presented by Marcus Construction are currently on sale.  For more information regarding the Home Opener presented by Marcus Construction, visit www.willmarstingers.com or call 320-222-2010. The 2013 season is presented by Charter Communications.