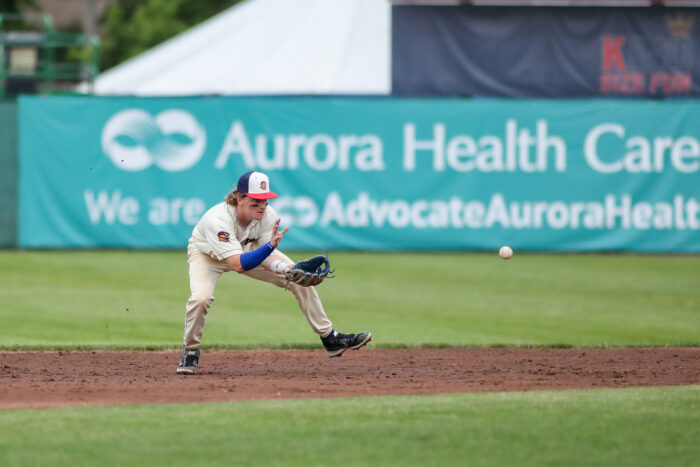 In a game where hits (two for Kenosha and four for Rockford) came far and few between, the Kingfish failed to get a hitter past second base against a superb Rivets pitching staff.

Right-hander Luke Patzner took the mound for Kenosha, giving up one hit, four walks and fanning six hitters after 4.1 innings for a no decision.

Lengthy left-hander Kyle Seebach (1-0) gave up two hits, three walks and struck out six in 7 innings of work to get the win. Seebach took a no-hitter into the sixth inning and had two successful pickoff attempts. Zach Kempe pitched a six-out save after coming in to relieve Seebach, who threw 104 pitches.

The Rivets’ lone run came in the eighth inning when Matthew Mebane registered his league-leading 17th RBI on the season on a fielder’s choice with the bases loaded. Kenosha’s Drew Fifer (0-2) was tagged with the loss, as he gave up the lone earned run, one hit, one walk and struck out one in the eighth frame.

Despite only registering two hits, seven Kingfish hitters reached base on the day. Anthony Mangano reached base a team-high three times in his Kingfish debut.

The Kingfish (6-4) sit at second place in the Great Lakes East division. The team will take on the Battle Creek Battle Jacks (7-3) tomorrow, June 10, with the first pitch at 6:05 p.m.