Leslie Walks It Off For Sweep 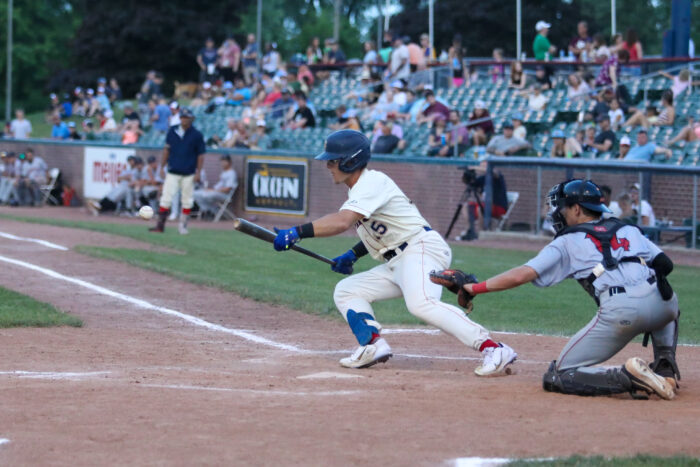 The Kenosha Kingfish walked it off on the Traverse City Pit Spitters 10-9 in 11 innings thanks to a Josh Leslie single to complete the sweep.

With the win, the Kingfish are 10-2 at Historic Simmons Field.

Traverse City struck early with two runs in the first frame. Jake Smallwood stole home and Camden Traficante plated Jared Miller on a single out to right field. Kenosha cut into the lead in the bottom half with a single off the bat of Drake Westcott that sent Jacob Tobias home to make it a 2-1 game.

In the bottom of the second frame, Antonio Brown showed off his speed with a safety squeeze single that sent Parker Stinson home. With the bases loaded, Nick Iannantone slapped a single back up the middle that scored Brown and Gage Williams to give Kenosha a 4-2 lead.

The Pit Spitters shaved a run off the lead in the fifth when Colin Summerhill hit an RBI double off of the right field wall to send Christian Beal trotting home. The Kingfish responded and expanded the lead with a flurry of runs in the bottom half. Brady Counsell scored on a play where the Pit Spitters committed an E1 and E4 on consecutive throws. Gage Williams kept the line moving on an RBI groundout that sent Stinson home, and Brown capped off the inning with a single that sent Josh Leslie home. This made the game 7-3.

Traverse City put up a five spot to take a 8-7 lead in the top of the sixth inning after five consecutive walks and a three-RBI triple by Summerhill.

Parker Stinson tied the game back up with a no-doubt solo shot over the right field wall to send the game into extras all knotted up at 8-8.

In the 10th frame, the Pit Spitters scored one on an error off the bat of Summerhill that plated Traficante. The Kingfish responded and sent the game to the 11th frame on a late throw home where Brown squeaked by with Westcott getting the RBI.

Leslie sent the entire Kenosha roster onto the field in celebratory fashion when he hit a walk-off single, scoring Counsell to complete the four-game sweep.

Stinson led the Kingfish bats by going 3-for-6 with a home run, three RBIs and three runs in the evening.

Summerhill paced the Pit Spitters bats by going 3-for-5 with four RBIs while being just a home run short of a cycle.

Jesse Wainscott (2-0) picked up his second win in as many nights after pitching a scoreless 11th inning.

Mitch White (0-3) was tagged with the loss after giving up the game-winning run after recording just one out.

The Kingfish (11-6) remain just a half game behind the Battle Jacks in the Great Lakes East division, and the Pit Spitters (8-10) sit in a tie for fourth place with the Rivets.

Kenosha will travel to Kokomo to take on the Jackrabbits on June 17 with a first pitch of 6:35 p.m.