Rafters Come From Behind For Win 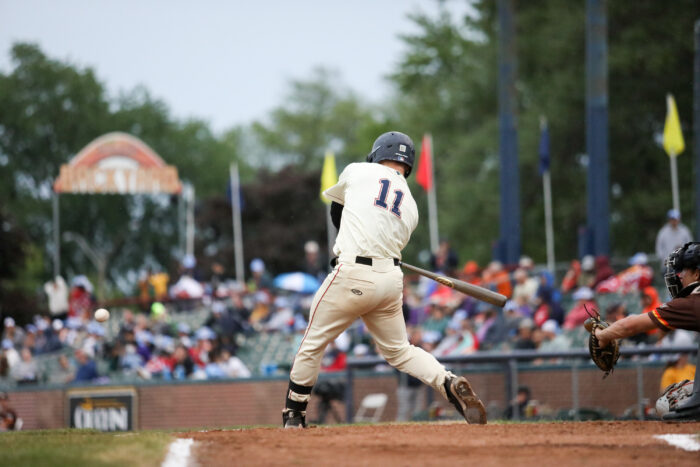 The Kenosha Kingfish fell 7-5 to the Wisconsin Rapids Rafters after giving up a four-run lead at Historic Simmons Field Monday night.

The Rafters struck emphatically in the first frame, as Northwoods League batting average leader Ben Ross led the game off with his seventh homer of the year.

The Kingfish fought back and then some to make it 3-1 after two frames, and it started on a Josh Leslie single that sent Parker Stinson home. James McCoy then hit a two-RBI double in the right-center gap to score Leslie and Gage Williams.

Kenosha expanded their lead to 5-1 in the bottom of the sixth frame courtesy of a Jacob Tobias sacrifice fly (scoring Drake Varnado) and a Drake Westcott single that scored McCoy.

Wisconsin Rapids broke the floodgates open in the seventh frame to tie everything up at 5-5. Ross got hit by a pitch with the bases loaded (scoring Chase Call) to start the inning’s scoring. Harry Owen scored on a wild pitch, and then Jacob Igawa hit Seth Stroh home on a single to left. Ross then stole home on a double steal with runners on the corners to eliminate the Kingfish lead.

The Rafters’ bats stayed hot into the eighth frame, as they put up another two runs to take the lead 7-5. Owen belted a double to right to score Garrett Broussard, and Chris Conniff hit a double of his own to score Owen.

The Rafters did not turn back and held the lead through the end of the game.

Ross led Wisconsin Rapids at the plate going 1-for-4 with a home run, two RBIs and two runs.

McCoy led the Kingfish bats, as he went 2-for-5 with two doubles, a run and an RBI on the day.

Malakai Vetock (2-0) got the win in relief after giving up no earned runs and four hits while striking out three in two innings of work.

Blake Malatestinic (0-3) was responsible for the loss after giving up two runs and three hits with three strikeouts in an inning and two thirds.

The Kingfish and Rafters will play the back half of the two-game series on Tuesday at 6:35 p.m.