The Rafters Team Report is a weekly update of your 2018 Wisconsin Rapids Rafters players in their spring seasons. Stay tuned each week for news and stats on players.

With three new players signed on Thursday, the Wisconsin Rapids Rafters now have 21 players on the roster. The excitement is certainly building as the Rafters’ season opener is now just 50 days away. Find out how the guys fared this week, including the three newest signees, in our team report:

Stevens Institute of Technology (16-12, 9-3 E8) had a busy week playing six games in four days as Charlie Ruegger and Chandler Brierly were in the thick of things helping the Ducks go 4-2 on the week. On Thursday, Ruegger started game one of a doubleheader at Elmira. The junior was brilliant again throwing six innings of one-run ball and striking out six in his third win of the season. Brierly started game two of Friday’s home doubleheader hosting Houghton College. Brierly also allowed only one run in four innings. The sophomore ran into some walk trouble allowing five free passes. But for every walk issued, Brierly threw two strikeouts finishing with 10 at the end of his outing; his first double-digit strikeout performance of his collegiate career.

Jonathan Hernandez assisted Chapman University (23-8, 8-7 SCIAC) to a three-game sweep over Caltech. Hernandez pitched in game one of Saturday’s doubleheader hosting the Caltech Beavers. The junior pitched the final two innings in game one’s 10-0 win allowing just two hits and fanning one. The Panthers’ offense was on fire this week scoring 33 runs across their three contests

Josh Campbell, Trayson Kubo and the rest of the Stephen F. Austin Lumberjacks (11-20, 4-8 Southland) fared better this week going 2-2 with wins over UT Arlington and Northwestern State. Campbell’s bat came alive versus UT Arlington. As the designated hitter, he went 3-for-3 with a two-run homer, two base hits including an RBI single, a run scored and a walk. Trayson Kubo pitched a total of two relief innings in three games this week. The junior struck out four, scattered two hits and allowed one run to cross in his three appearances.

Chandler Greenfield and Brecken Lewis both saw action this week for Dixie State (18-20, 14-14 PacWest). The Trailblazers went 3-1 hosting Fresno Pacific in a four-game series including splitting a doubleheader on Friday. Greenfield pitched a total of two innings in relief between both games Friday. He threw 1.1 innings in game one followed by 0.2 innings in game two, striking out three total. Brecken Lewis pitched a scoreless ninth in game one and was given the win thanks to a four-run bottom of the ninth capped off by a walk-off single.

Matthew Devillier worked a gem in game two of a doubleheader for Centenary (18-9, 9-0 SCAC) as the Gents hosted Southwestern. The junior threw six innings of shutout ball allowing just four hits and fanning eight. Devillier earned his fourth win and now sports an ERA of 1.96. In nine starts this season, Devillier has failed to log at least five innings just once.

The UCF (22-11, 4-5 American) Knights traveled north this week for a weekend series facing the UConn Huskies. Tyler Osik once again proved efficient collecting four hits and three RBIs (from two singles and a hit by pitch).  Brody Wofford was limited to a start at DH in the finale of the UConn series on Sunday where he forced a walk in three plate appearances.

SIU Edwardsville (7-22, 3-12 OVC) dropped four straight on the road this week with a loss at the hands of the Missouri Tigers and a three-game sweep to Eastern Kentucky. Bret Fehr scored three runs with two hits, two walks and a stolen base in the Eastern Kentucky series. Mason McReaken had a rare rough outing on Friday facing EKU allowing three runs on four hits. This type of outing is a rare occurrence for the senior. In 33 career appearances, McReaken has only allowed more than two runs in an outing six times.

Will Frizzell broke out of his recent hitless streak as Texas A&M (23-9, 5-7 SEC) won a three-game home series over LSU this week. Frizzell collected a double, his fifth home run of the year, scored twice, forced two walks and a hit by pitch in three games against the Tigers.

Payton Robertson was limited to a defensive substitution in game one of Sunday’s home doubleheader against the University of New Orleans. Robertson came in as a pinch runner in the home half of the eighth and played at shortstop to end the game. Lamar University (7-25, 3-12 Southland) went 1-3 in four games this week.

Luke Phillips had a quiet week at the plate. Phillips collected two hits and an RBI hit by pitch this week as the West Alabama Tigers (13-20, 8-12 GSC) went 2-1 in a three-game set with Alabama Huntsville. Phillips has been consistent with his glove this season. The sophomore has not committed an error since February 21st.

Jarrod Watkins also had a quiet week at the plate by his standards. Watkins collected a hit, scored a run, forced a walk and stole a base showing once again, he can do a little bit of everything even when he is not frustrating opposing pitchers with his knack for making contact. Indiana State (16-10, 2-4 The Valley) dropped two out of three this week in a road series at Bradley.

Ty Duvall got the start behind the plate Tuesday at Middle Tennessee State. Duvall went 1-for-2 with a double, a run scored and a walk in the eventual 4-3 loss. Vanderbilt (19-13, 7-5 SEC) ended the week strong following the loss. The Commodores took two out of three at home facing Georgia to improve to two games above .500 in SEC play.

Alex Jackson and Heartland Community College swept a home doubleheader hosting Lewis & Clark. The Hawks crushed Lewis & Clark 10-2 in game one and then won game two in walk-off fashion 1-0 scoring the winning run on an error.

The 2018 Wisconsin Rapids Rafters will begin their season on the road against the Madison Mallards on Tuesday, May 29th. The Home Opener is slated for Friday, June 1st against the Wisconsin Woodchucks. The entire 2018 Rafters schedule is available at www.raftersbaseball.com.

The Wisconsin Rapids Rafters are a member of the finest developmental league for elite college baseball players, the Northwoods League. Entering its 25th anniversary season, the Northwoods League is the largest organized baseball league in the world with 20 teams, drawing significantly more fans, in a friendly ballpark experience, than any league of its kind. A valuable training ground for coaches, umpires and front office staff, 190 former Northwoods League players have advanced to Major League Baseball, including three-time Cy Young Award winner Max Scherzer (WAS), two-time World Series Champions Ben Zobrist (CHC) and Brandon Crawford (SFG) and MLB All-Stars Chris Sale (BOS), Jordan Zimmermann (DET) and Curtis Granderson (TOR).  All league games are viewable live via the Northwoods League portal. For more information, visit  www.raftersbaseball.com or download the new Northwoods League Mobile App on the Apple App Store or on Google Play and set the Rafters as your favorite team. 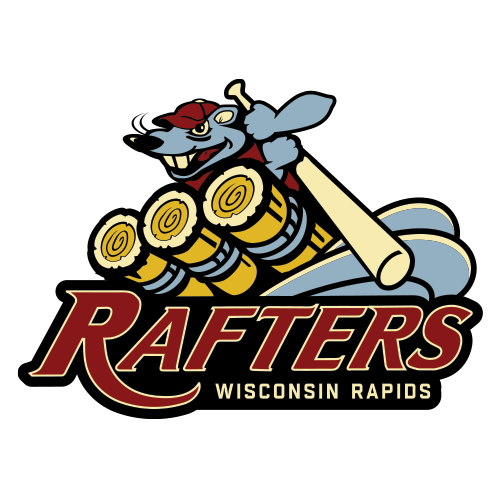