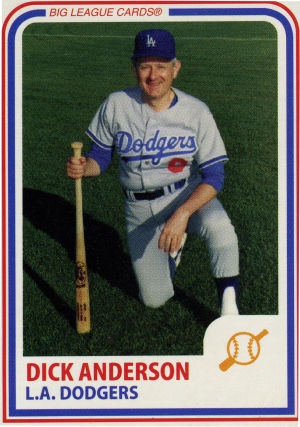 Mallards "fowliner" Dick Anderson, back when he still liked the Dodgers.

Doug Moe writes about Madison and the people who make it a unique place. His column runs Mondays, Wednesdays, Fridays and Sundays in the State Journal.

Read more from this columnist

The second-best baseball idea Dick Anderson ever had will debut later this month when the Madison Mallards open their season at Warner Park.

Anderson, 73, is the retired longtime president of the Neckerman insurance agency in Madison. He’s a baseball nut in general, and a Mallards nut in particular. Anderson and his wife, Kathy, have hosted Mallards players in their home every season but one since the team arrived. Dick owns the original Mallardsmobile, and drives it around town.

For years, a portion of it consisted of Anderson writing Stenman letters with suggestions about how the Mallards could better engage their fans. Stenman’s rejections were always cheerful. Anderson was especially persistent on the matter of removing the tops of the dugouts at the Duck Pond. The Los Angeles Dodgers did it in spring training in Florida — to increase the interaction between players and fans — and Anderson, until recently a rabid Dodgers fan, thought it would work great at Warner Park.

“I must have half a dozen letters from him about it,” Stenman said this week, chuckling. He always replied, “Dick, we’re not taking the tops off our dugouts.”

In fall 2012, Anderson read a Wall Street Journal article about how the San Francisco Giants, rather than using young kids to chase down foul balls that stay on the field, employ senior citizens, who are called “balldudes.”

The following spring, Anderson took the idea to Stenman, with the idea of putting it in play with the Mallards, and for once Stenman said, “Sure, it sounds like fun.” Anderson volunteered to take the lead. They ended up waiting until this spring to debut the “Fowliners,” nine individuals — all but one over 60 — who have been fitted with Mallards uniforms, and will sit on stools in foul territory, scooping up foul balls and handing them to young fans in the stands.

Anderson is the oldest Fowliner. His son, Jay Anderson, 37, is the youngest. There is one woman. Each will work eight or so games, and they’re expected to bring a glove. “I have the one I used in college,” somebody said.

Anderson’s own glove has received more recent work. As mentioned, Anderson was a lifelong Dodgers fan, at least until the family dysfunction of the team’s ownership a few years ago caused him to change allegiance to the Brewers.

In 1983, Anderson participated in the Dodgers’ first adult baseball camp, paying some $4,000 to go to Florida in November and play and hang out at Dodgertown — the team’s Vero Beach spring training home for many years — with former stars of the team.

That first year, Anderson got a hit off Don Drysdale. It was all so much fun that Anderson returned three times, including in 2003, on the 20th anniversary of the first camp, when he was something of a celebrity, the only attendee who had also been there in 1983.

In June 2006, Anderson heard that Robin Roberts, the Hall of Fame pitcher who had a brilliant career with the Philadelphia Phillies, was making an appearance at a Mallards game at Warner Park.

Anderson’s mind immediately flashed back more than half a century. In 1954, as a young teenager, Anderson served as a bat boy at a baseball game in Cottage Grove between the McFarland Home Talent League team and a group of Madison all-stars. The thing that made it so memorable was that Robin Roberts, then 27, a famous Major League pitcher at the height of his powers, pitched for McFarland. Roberts was married to a McFarland native, Mary Ann Kalnes, and volunteered to come to Madison to pitch the charity game.

Among those on Madison’s team were Gene Calhoun, later a prominent college football official, Otto Puls and John Roach. The pitcher was a University of Wisconsin athlete named Norb Schachte.

McFarland won the game, 4-0. Roberts gave up only three hits and struck out 16. But the opposing pitcher, Schachte, was good, too, and struck Roberts out twice.

Fifty-two years later, in June 2006, when he heard Roberts was coming to Warner Park for the Mallards, Anderson went to Vern Stenman with a request. Might Roberts make a side visit to Meriter Hospital, where Norb Schachte, the opposing pitcher all those years ago, was ailing?

Roberts made the hospital visit. Schachte was thrilled. The two talked baseball for half an hour. Roberts gave Schachte an autographed ball and picture. Anderson thanked Roberts as they walked out of the hospital together. “This is the kind of thing we should do,” Roberts said.

Norb Schachte — who, like Anderson, was a successful insurance agent in Madison — lived four more years. In fact, he and Robin Roberts died within two months of each other in 2010. Dick Anderson, meanwhile, will keep thinking up ideas for the Mallards as he chases foul balls this summer.

Two points seem clear. The roofs will stay on the dugouts and it won’t be easy topping that hospital visit eight years ago.