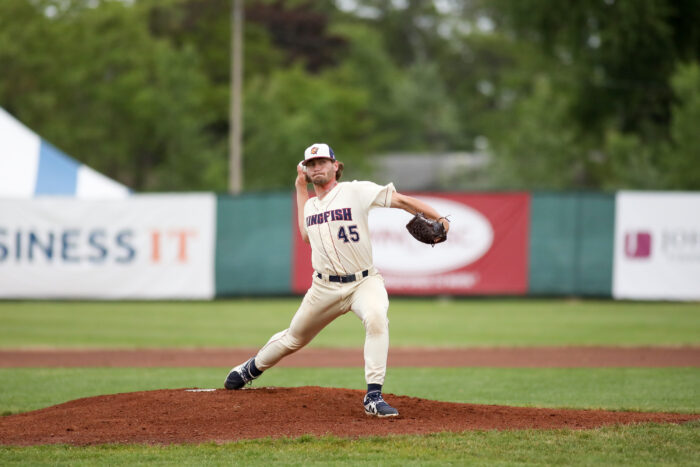 The Kenosha Kingfish fell 7-6 against the Lakeshore Chinooks in a back-and-forth battle Saturday night.

The Kingfish got it going in the first, as Josh Leslie hit James McCoy and Anthony Mangano home on a double to the right-center gap to make it 2-0.

The Chinooks responded promptly in the top of the third with a four-spot of their own. Matthias Haas hit Marcus Cline and John Bay home on a single to tie the game, and Garrett Martin plated Haas and Matthew Deprey on an error off of his bat. Kenosha cut the lead in half after Jacob Tobias scored Drake Varnado on a sacrifice fly to right field.

Lakeshore expanded their lead to 5-3 in the top of the forth, as John Bay plated Joey Spence on a bloop single to center.

The Chinooks tacked on yet another run to make it 6-3 in the fifth when Bartolero scored Martin on a double in the gap in right-center.

The Kingfish got a run back in the bottom of the fifth when Mangano sent Varnado across the plate to make it 6-4.

Kenosha tied everything up in the top of the eighth after a Gage Williams single that sent Leslie home and a Stinson sacrifice bunt that scored Michael Dallas.

Lakeshore scored the winning run in the top of the 10th off a John Bay single that plated Caleb Nartolero to make it 7-6.

Garrett Martin led the Chinooks’ charge at the plate, as he went 1-for-4 with a double and two RBIs on the night.

Josh Leslie had the hottest Kingfish bat, as he went 3-for-4 with a double, a run and two RBIs.

Mitch Mueller (1-1) got the win for Lakeshore, as he pitched two and two thirds of a frame of perfect ball with four strikeouts.

Grayson Thurman (0-2) was tagged with the loss after giving a run and two hits in two innings of work.

Kenosha and Lakeshore will finish their series up at Lakeshore on June 25. The first pitch will be at 5:05 p.m.