WILLMAR, MN – After another night of eighth-inning heroics, the Willmar Stingers fall in the ninth inning against the Eau Claire Express. The low-scoring pitchers’ dual concluded 3-2 in Eau Claire’s favor

Starting the game for the Stingers was right-handed pitcher Reed Smith. Smith pitched six innings, giving up two runs while striking out six. The Louisiana Tech commit didn’t allow a single walk on the mound,

Eau Claire took the lead early when Charlie Szykowny hit a sacrifice fly to center field bringing Clay Conn home in the bottom of the first.

The next run wouldn’t cross home until the top of the fourth when Eau Claire’s first baseman Reed Latimer hit a double sending Szykowny home from second.

In the bottom of the fourth, Elias Stevens continued his reign of terror as he smashed another home run to deep left-center field putting the Stingers on the board.

No one else would cross the plate until the bottom of the eighth when Willmar brought home a runner from third, tying the game 2-2. The run scored due to a throwing error from Szykowny as his throw took Latimer off the first base bag.

The Express would score the winning run in the top of the ninth as a bases-loaded walk would bring home a runner from third. The Stingers were unable to answer in the bottom of the inning.

Your MidWest Technology Campus Player of the Game is Elias Stevens. He hit his fourth home run of the year tonight just four games into the season. Elias is the league leader in home runs as he continues his hot start to the season.

The Stingers travel to Duluth tomorrow to take on the 1-3 Duluth Huskies, as both teams are in search of their second win this season. The first pitch is scheduled for 6:35 pm at Wade Stadium. 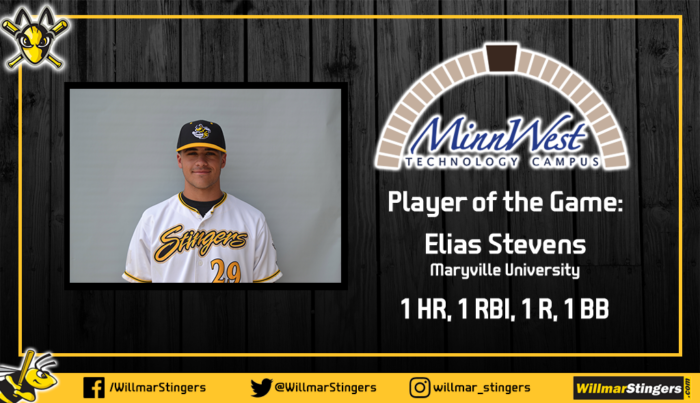