Stingers Sweep Series Against the Rox

Willmar, MN-The Willmar Stingers took the Great Plains Sub-Divisional series 2-0 winning against the St. Cloud Rox 3-2. The Stingers  battled the Rox in a close one at Joe Faber Field in game two to advance to the Great Plains Divisional Championship.

It was a game of pitching with a great matchup of Jack Habeck of St. Cloud State going against Hunter Day of Tarleton State University. Habeck went six innings and struck out six batters with allowing only one earned run when St. Cloud scored in the bottom of the 5th. Day pitched 5 1/3 innings striking out eight batters and allowing two earned runs on five hits.

The bats would come alive for the Stingers with Kyle Payne scoring off a walk in run, Jordan Sagedahl scoring off a wild pitch and Jake Entrekin bringing home Scott Anderson off a sacrifice fly ball.

The Stingers will travel back to the Beehive tomorrow to face the Duluth Huskies in the Great Plains Divisional Championship. The first pitch is scheduled for 7:05 pm on Tuesday night. 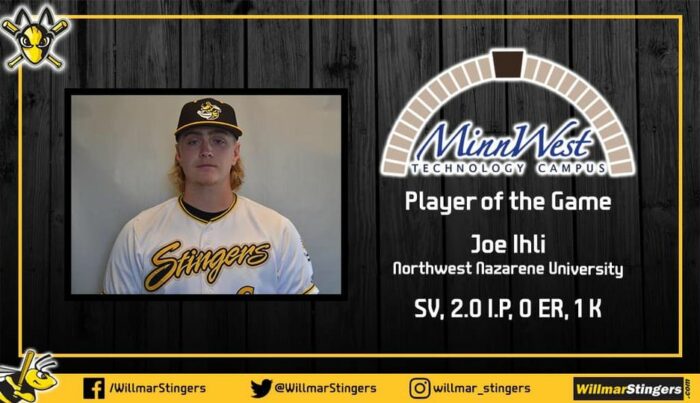