Rockers Fall on Road to Chinooks in 2022 Regular Season Finale 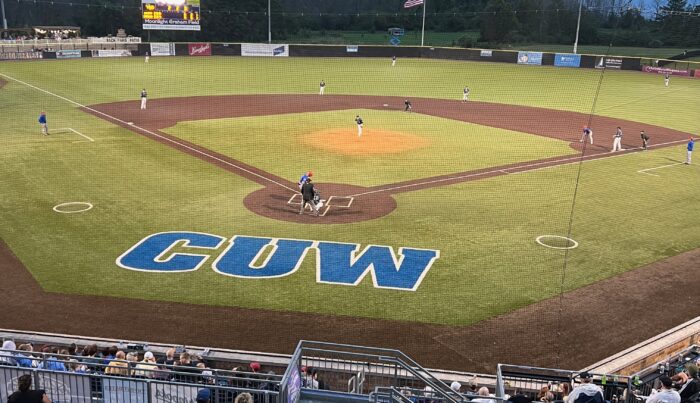 Green Bay closes out 2022 season with road losses to Lakeshore

Mequon, Wis.- The Green Bay Rockers fell to the Lakeshore Chinooks in a doubleheader Saturday night 14-8 and 5-1 Kapco Park to close out the 2022 regular season.

After the first game started in the top of the second due to a suspension, the Chinooks were up 4-0 and tacked on four more runs in the bottom of the second, taking an 8-0 lead through two innings of play.

Green Bay responded with one run in the top of the third on a solo home run to left center field from Jake Mastillo, making it an 8-1 ballgame after two and a half innings of play.

The Chinooks however came back with two runs of their own in each of the third and fourth innings, while the Rockers scored one more in the fourth themselves, as the Lakeshore lead extended to 12-2 heading into the fifth.

Green Bay came back with RBIs from Keniel De Leon and Carson Yates in top of the fifth, but the Chinooks scored two more runs in the bottom of the frame, as the score went to 14-4 in favor of Lakeshore going into the sixth.

Chase Hudson hit a solo home run in the top of the sixth and Alex Windey pitched a scoreless bottom sixth, with the Rockers making it a 14-5 game after six innings in Mequon.

Windey pitched a scoreless seventh and eighth innings as well to keep the Chinooks off the board through those two innings, and the Rockers tacked on three more runs in the top of the ninth.

Despite the late three runs for the Rockers, Lakeshore held on for the win 14-8 in game one of the two-game doubleheader.

In the second game, Lakeshore scored four runs in the bottom of the third off a three-RBI triple and a throwing error, giving the Chinooks the 4-0 lead through three innings.

Green Bay however responded in the top of the fifth on an RBI double by Chase Hudson, bringing home Brett Blair which gave the Rockers their first run of the second game.

Lakeshore came back and tacked on one more run in the bottom of the sixth, taking a 5-1 heading into the seventh and final inning.

Green Bay did not score in the top of the seventh as Lakeshore held on for a 5-1 win, sweeping the doubleheader at Kapco Park.

The Rockers have now concluded their 2022 season with Saturday’s contest. Green Bay will now look to the 2023 season and the Rockers thank all fans for their continued support throughout the entire summer.

The Green Bay Rockers are a member of the finest developmental league for elite college baseball players, the Northwoods League. The Northwoods League is the proven leader in the development of elite college baseball players. Now in its’ 29thseason, the Northwoods League is the largest organized baseball league in the world with 22 teams, drawing significantly more fans, in a friendly ballpark experience, than any league of its kind. A valuable training ground for coaches, umpires, and front office staff, 300 Northwoods League players have advanced to Major League Baseball, including three-time All-Star and 2016 Roberto Clemente Award winner Curtis Granderson, three-time Cy Young Award winner and World Series Champion Max Scherzer (NYM), two-time World Series Champions Ben Zobrist and Brandon Crawford (SFG) and World Series Champion Chris Sale (BOS). As well as 2019 Rookie of the Year and 2019/2021 Home Run Derby Champion Pete Alonso (NYM) and 2021 All-Star, MLB Gold Glove winner and 2019 Second Team All-MLB shortstop Marcus Semien (TEX). All league games are viewable live via the Northwoods League website. League games are viewable live at watchnwl.com and on ESPN+. For more information, visit www.greenbayrockers.com or download the new Northwoods League Mobile App on the Apple App Store or on Google Play and set the Rockers as your favorite team.