The Green Bay Rockers announced the hiring of Chris Krepline as their new Field Manager on November 10th, 2021. Krepline currently serves as the Head Baseball Coach at Lawrence University in Appleton, where he has led the program since 2018. He recently led Lawrence to the first Conference title since 1979 in May 2022.

“I am grateful to owner Mark Skogen and GM John Fanta for the opportunity to become the next Field Manager of the Green Bay Rockers,” said Krepline. “Being raised in the area, it is very exciting to have the opportunity to lead an organization that has brought such a passion for baseball to Green Bay. I take great pride in the product we put on the field and can’t wait to continue to enhance the strong culture of baseball that lives in Northeast Wisconsin.”

Krepline is no stranger to the Northwoods League. He joins the Rockers after spending last summer as an assistant coach for the Minnesota Mud Puppies, an expansion team that played exclusively in the Great Plains Division following Thunder Bay’s pause due to border travel. Krepline also served as an assistant coach for the Green Bay Bullfrogs during the 2013 season and was a pitcher for the team in 2007 during its inaugural season in the League.

Last spring, Krepline oversaw a Lawrence University program that finished the season with the third-highest win total in school history. Prior to being selected to lead the program he also spent time as an assistant coach for the Vikings (2013-2015), working closely with pitchers, catchers and infielders. In between his two stints at Lawrence, Krepline served as an assistant coach at St. Norbert College where he worked extensively with the pitching staff for four seasons (2015-2018). During that time, he coached six All-Midwest Conference and four All-Central Region pitchers. St. Norbert College also had the Midwest Conference North Division Pitcher of the Year in three separate seasons he was there. With Krepline on the staff, St. Norbert won three Midwest Conference North Division titles, a Midwest Conference championship and played in the NCAA Division III Regional Tournament.

Krepline is a 2009 graduate of Carthage College, where earned his bachelor’s degree in exercise and sport science while starring on the baseball team. He earned a master’s degree in applied exercise science from Concordia University Chicago in 2015. He is also Strength & Conditioning Certified as a Performance Enhancement Specialist by the National Academy of Sports Medicine.

A native of Reedsville, Wisconsin, Krepline and his wife Bri reside in Appleton with their two children, Boe & Sadie. 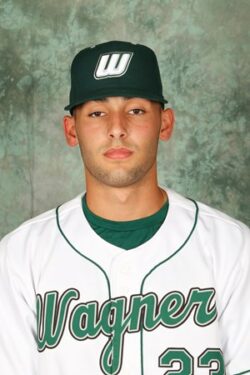 Michael Ruggiero from New York begins his first season as an infield coach with the Green Bay Rockers. He has just finished his last year at Wagner College in Staten Island, New York. Where he was starting shortstop for the Seahawks. In 2022 he started all 51 games, batting .272. He became the 64th player in Wagner history to reach 100 hits while driving in 30 RBI’s and scoring 35 runs. He was one of the top 2 players in homeruns (7). He had an OPS of .821. On the field on the year he had 123 assists and 33 double plays for the Seahawks. Finished second on the team with hits, posted .351 on base percentage. In the field he recorded 80 assists (8th) in the NEC, while fielding 17 double plays. In 2020 started all 14 games at shortstop. He had a team leading 31 assists,( 5th) in NEC. He led the team in walks with 25 as he showed a patient eye at the plate. He was third on the team in SLG% .457. In 2019 Michael played in the Northwoods league for the Green Bay Booyah. He returns back to Green Bay to coach with his experience in Green Bay he will be a very good addition to our coaching staff.