Growlers in the Minor Leagues Update 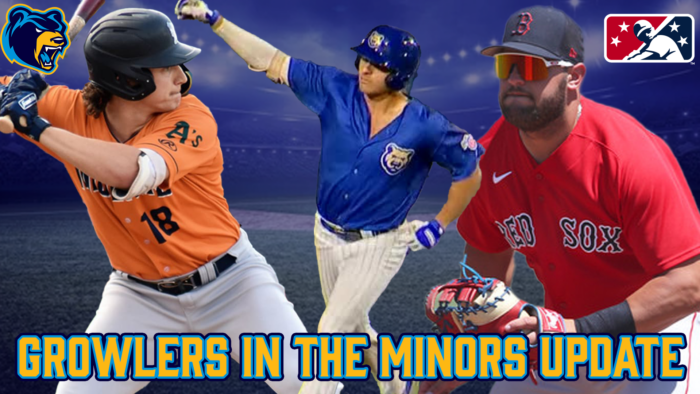 Kalamazoo, MI – As the Minor League baseball season concludes, let’s catch up with the former Growlers who are currently playing in the minors. There are currently over 30 Growlers still chasing that dream of playing in the majors. This past season saw 2015 Growler Brandon Hughes make his major league debut with the Chicago Cubs and 2016 Growler David Hensley debut with the Houston Astros. Who will be the next Growler to make it? Let’s take a look around Minor League baseball.

Matt Mervis
Mervis was named the Minor League Player of the Year by the Cubs organization. The only players to hit more home runs in a minor league season in the Chicago Cubs organization than Matt Mervis are Kris Bryant, Bryan LaHair and Javier Baez. Mervis has hit 36 total home runs this season between three different teams. He has had a rapid rise through the Cubs minor league system. Mervis started the season with the South Bend Cubs (Advanced-A), he was promoted to the Tennessee Smokies (AA) after 27 games and slugged his way all the way up to the Iowa Cubs (AAA). Mervis’ stat line for the 2022 season; .311 BA, 36 HR and 119 RBI. Matt Mervis should see himself playing at Wrigley Field very soon.

Niko was teammates with Mervis in Kalamazoo in 2018. Kavadas was just named the Red Sox Minor League Offensive Player of the Year. Kavadas has also had a rapid rise through the minor league system. He began the season with the Salem Red Sox (A), made his way to the Greenville Drive (Adv. A) before finishing the season with the Portland Sea Dogs (AA). Niko’s stats for the 2002 season; .280 BA, 26 HR and 86 RBI.

Zack Gelof
Zack played for the Growlers in 2019. Gelof finished the 2022 season with the Las Vegas Aviators, the Triple-A affiliate of the Oakland A’s. In an article from The Athletic earlier this month, Oakland Athletics assistant GM Billy Owens had this to say about Gelof, “Zack Gelof is a DUDE to the millionth degree. He has real talent that will translate to the top level in numerous ways.” There is clearly a lot of excitement around Gelof within the A’s organization. Gelof’s stat line for the 2022 season; .273 BA, 18 HR, 66 RBI. It is worth noting that Zack’s younger brother Jake who played for the Growlers in 2021 is a highly touted prospect at the University of Virginia.

Connor Hollis
The race for the next Growler to make it to the MLB may come down to either Matt Mervis, Zack Gelof or Connor Hollis. Hollis won the Northwoods League batting title while playing for the Growlers in 2017. Leading the league with a .375 batting average. Since then all Hollis has done is hit. Finishing the 2022 minor league season with a combined .329 BA average across both AA and AAA. Hollis once again won a batting title after leading the Texas League (AA) in batting average with a .333 average. Hollis played 103 games for the San Antonio Mission in 2022, the AA affiliate of the San Diego Padres. Hollis was promoted to the El Paso Chihuahuas (AAA) the last month of the season where he played 24 games and hit .310.

2014:
Caleb Baragar LHP (Indiana Univ.) – Caleb has played in the MLB with the San Francisco Giants. Baragar has spent the 2022 season with the Reno Aces, the AAA affiliate of the Arizona Diamondbacks.

2017:
Connor Hollis IF (Univ. of Houston) – Spent most of the season with the San Antonio Mission, AA affiliate of the San Diego Padres. Promoted the last month of the season to the El Paso Chihuahuas (AAA).

Growlers Playing For Non-Affiliated (Independent) Teams by Year in Kalamazoo