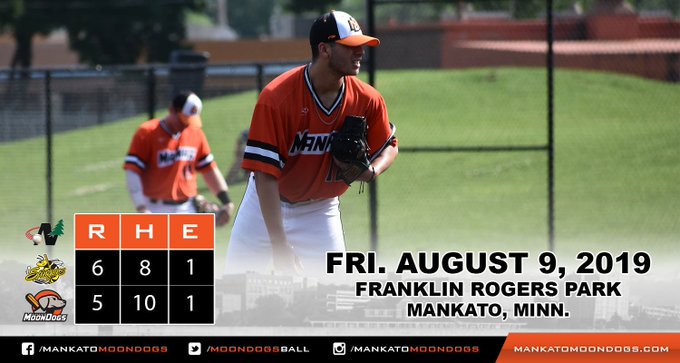 Mankato, Minn. – The Mankato MoonDogs lost a tough one in the series finale 6-5 against the Willmar Stingers at The Frank on Friday night. It was a marathon that went back and forth, but in the 12th inning Willmar prevailed as they closed the door on Mankato and put an end to the Dogs six-game win streak.

The MoonDogs tallied the game’s first run. Cuba Bess (Grand Canyon) batted in the lone run with a base knock. It plated Nick Novak (Angelo State) to make it an early 1-0 lead for the Dogs.

Scoring picked up in the third as the Stingers evened the score at one. A defensive miscue allowed James Gamble (Nevada – Las Vegas) to score from second. It was 1-1 at The Frank after the third.

Willmar then took the lead with a pair of runs in the top half of the sixth. Branden Boissiere (Arizona) slapped a ball to deep center to score Ryan Johnson (Pepperdine) on a sacrifice fly. Justin King (Alabama) played copycat with a sacrifice fly of his own to score another and give the visiting Stingers a 3-1 advantage.

Mankato bounced back quick, evening the score in the bottom half. It all came with two outs when Josh Elvir (Angelo State) pulled a double down the right field line to get in scoring position. He came around and crossed the plate after Willmar’s pitcher failed to deliver a routine putout to his first baseman, he overshot him for an error. The tying run came in for the Dogs when their first baseman, Tanner Craig (Evansville), slapped a single up the middle to score Sean Ross (Pensacola).

The game then required extras to declare a winner. With the international tie breaker rule (ITB), the Stingers capitalized on their chance with Willmar runner starting on second. They bunted him over and Gamble knocked him in.

Then it was the Dogs turn. Novak moved over their last out, James Gargano (Butler), with a bunt and ended up beating it out for a hit. Then Mikey Perez (UCLA) put a charge into one and everyone at The Frank thought it was gone, but it was only a wall scraper. However, it was enough to score Gargano and even the score. Later on in the 10th, Ross was robbed of the potentially game-winning base hit to end the inning.

After Willmar moved over the go-ahead run again in the 11th, King notched another RBI to make it 5-4. The Dogs would not give up, however.

In the bottom half, Craig moved over Ross, their ITB runner, to third with a fly out. Then, with two outs, Garrett Gilbert (Creighton) clutched up with a base knock to score Ross and even the score again. That was all for action in the 11th.

The Stingers continued to trade blows with the Dogs in the 12th. They moved their man over again, with a fly out, then scored with a base knock. They owned a 6-5 lead as the top half wrapped up. Then the bottom half concluded, it revealed an end to the Dogs six-game winning streak as the Stingers put an end to the marathon, 6-5.

Bess and Perez each had solid night’s, both of them went 2-5 with an RBI on Friday evening.

Willmar’s starter, John Bezdicek (Southwest Minnesota State), went five frames on Friday night. He allowed five hits and a run while walking one and retiring six on strikes en route to the no decision. Ricky Maddock (Central Missouri) notched the win for his work from the eighth through the 12th. He surrendered a pair, neither were earned as each scored as ITB runners. Maddock also gave up a trio of hits, two walks and struck out six.

The starting arm for Mankato, Fabian Muniz (Angelo State), went seven complete innings in his 3rd start of the summer. Fabian surrendered three runs (two earned) and gave up seven hits. He walked one and struck out six along the way. Jesse Parker (Lewis-Clark State College) came in to start pitching the eighth and went the distance as he worked through the 12th. It amounted to five frames of work where he was hit off three times for three runs, none of which were earned after each run was via the ITB. He was handed the loss for surrendering the winning run. Parker walked one and struck out four.

Tomorrow the Mankato MoonDogs (35-35) begin another two-game series, their final series of the regular season, with the Rochester Honkers (37-33). Josh Ramirez (Washburn) will pitch for the MoonDogs on Saturday night. He will embark on his 5th start of the season when he throws out the 6:05 p.m. first pitch at Franklin Rogers Park in Mankato, Minn.