MoonDogs Fall to Honkers and Out of Playoff Contention Saturday Night 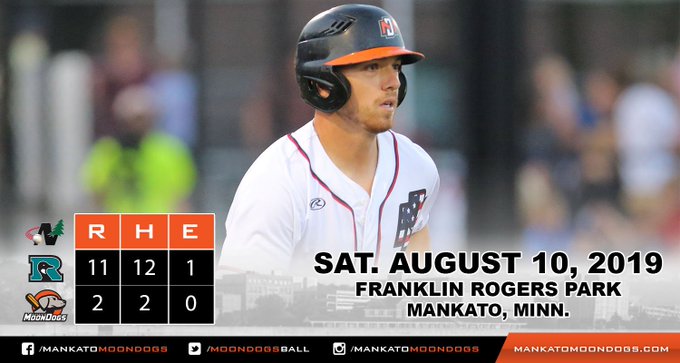 Mankato, Minn. – The Mankato MoonDogs dropped their 2nd straight game in a row on Saturday night against the Rochester Honkers. The final score was 11-2, the Honkers took over after the Dogs scored first in the opening frame. The loss put the MoonDogs out of playoff contention.

The MoonDogs and Honkers made it an inning and a third before Mother Nature could let loose on The Frank. Then the game went into a short rain delay, play resumed at 6:37 p.m.

Cuba Bess (Grand Canyon) got on base just before the rain delay. When play resumed, he swiped second and notched a stolen base. Josh Elvir (Angelo State) drove him in from second a few batters later with an RBI single.

Rochester answered the Dogs quick by jumping out to a six-run lead in the second. They scored seven runs on five hits and got some help from five free passes.

Scoring mellowed out until the fifth, where the Honkers kept it going and tallied three more runs. Henry George (Minnesota – Duluth) had the big hit, a two-RBI single, to round out the scoring. The score was 10-1 through five at The Frank.

The Honker’s centerfielder, George, tallied another RBI with a sharp single up the middle to score Austin Schell (Golden West College) and make it 11-1 in the seventh.

The MoonDogs finally got back in the score column in the bottom of the seventh. Sean Ross (Pensacola) cruised around the bases with ease following a walk, balk and a pair of wild pitches. He took one off the 10-run deficit to make it 11-2. However, that’s all the Dogs would drive in following Rochester’s 11 unanswered runs. The loss on Saturday put an end to any of Mankato’s hopes of making the postseason as they were knocked out of contention.

Player of the Night at The Frank was Elvir. He went 1-for-4 with the RBI that gave the Dogs the lead in the first.

The win was awarded to Rochester’s starter, Mike Lopez (Cal State San Marcos), after he took the seven-run lead via his offense in the second frame and ran with it. He cruised through six frames and allowed two hits and a run while handing out two free passes and retiring a trio on strikes.

The MoonDogs starting arm, Josh Ramirez (Washburn), went a tough inning and a third on Saturday night. He was handed the loss after being relieved by Jacob Pinc (Viterbo) after allowing seven runs on five hits. Pinc pitched 5.2 frames, surrendered eight hits and four runs. He also walked a pair and struck out three Honkers hitters. Ross, the centerfielder, came in to work on the hill for the eighth. Ross worked through the top half of the ninth and finished it by surrendering a walk and striking out one in the ninth.

Tomorrow afternoon the Mankato MoonDogs (35-36) and the Rochester Honkers (38-33) go head to head again in the regular season finale. First pitch is slated for 3:05 p.m. at Franklin Rogers Park in Mankato, Minn.