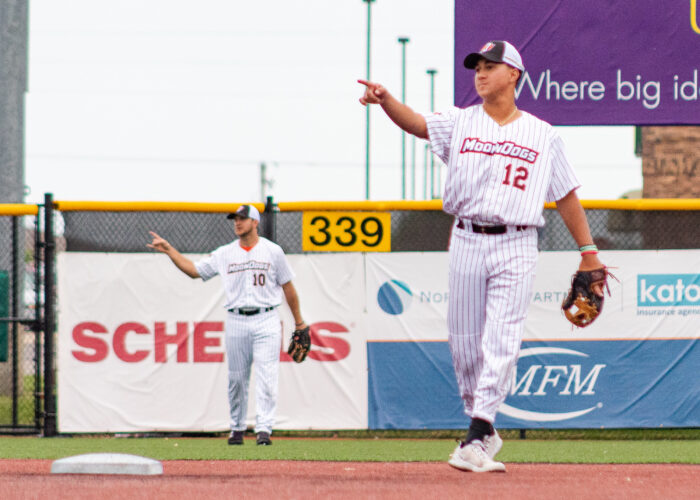 LA CROSSE, Wis. — The Dogs exploded for 20 runs on Friday night at Copeland Park in La Crosse. They ended up axing the Loggers 20-5 in a Northwoods League Baseball Game for their first road win and fourth overall victory on the season to improve to 4-1.

Friday’s ballgame marked the MoonDogs’ first time posting 20 or more runs in a single game since they defeated the Thunder Bay Border Cats 27-5 at home on Aug. 3, 2013.

With the loss, the Loggers record is now 1-4. They have now dropped four straight.

The Dogs wasted no time getting on the board, scoring two runs right away in the first inning off singles from both Nick Altermatt (Minnesota State – Mankato), and Orlando Salinas Jr. (Kansas State).

Then the top of the order game up in the third and produced five runs. Four of them came off a grand slam from Salinas Jr., who totaled seven RBI on the day.

The Dogs picked up three more runs in the fourth with Salinas Jr. getting his sixth and seventh RBI of the night. Derek Shoen (UMary) singled to drive in the third run for his first RBI of the night during the fourth inning as well.

The Dogs were held in check until the ninth inning when they batted around their order and scored 10 runs in the inning. It was capped off by a three-run blast by Shoen that made it 20-5, where it ultimately stood.

Kai Roberts (Utah) and Dominick McIntyre (North Alabama) also contributed to the run column, getting an RBI each.

The pitching staff was also solid, with starter John Lundgren (University Of North Alabama) going five strong and striking out three batters. He also worked particularly well under pressure, working out of jams on numerous occasions. He got his first win of the season to improve to 1-0 on the summer.

Thomas Bruss (Augustana) came in for relief work in the sixth and seventh and held the Loggers scoreless while striking out a pair.

Russell Derbyshire (Mineral Area College) got the loss for the Loggers, only throwing three innings and giving up seven runs with five of them being earned, resulting in his first loss of the season.

The MoonDogs are back in La Crosse, Saturday night for the two-game series finale before finishing up their road trip in St. Cloud, Sunday night.  The Dogs will start Donovan Schultz (Evansville) tomorrow on the hill for his Moondogs’ debut. First pitch is slated for 6:35 p.m. at Copeland Park.