MoonDogs Drop Fourth Straight with Loss to Larks at Home 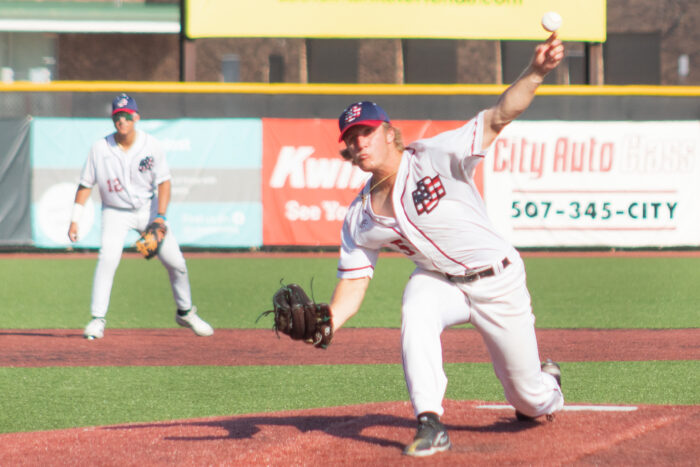 MANKATO, Minn. – The Mankato MoonDogs fell 5-3 in their first meeting of the season against the Bismarck Larks, Sunday night at ISG Field.

With the loss, the MoonDogs have now lost four straight games and own a sub-.500 record (10-11) for the first time all season. The Larks improved to 8-11 with their victory.

The Larks cracked the score column first on Sunday when Reggie Williams (CSU – Pueblo) blooped a single to left to score A.J. Barraza (Cal State – San Bernadino) from third base, which made it a 1-0 game.

Bismarck took a 3-0 lead in the top of the fifth inning when an error on the MoonDogs’ shortstop allowed Kai Hori to score from second base. Two batters later, Khalid Callymore (Montevallo) scored on a single to short hit by Dylan Perry (Kaskaskia). With five innings by the wayside and four to go, the Larks carried a three-run lead over the MoonDogs.

After the Larks scored another run in the top half of the eighth, the MoonDogs broke through and cracked the score column for the first time in 26 innings. Kai Roberts’ (Utah) double down the leftfield line scored John Newman Jr. (California – Santa Barbara) to bring Mankato within three of Bismarck. Later in the inning, an RBI groundout from Treyton Rank (Florida State) and RBI single from Ariel Armas (San Diego) added two more runs to bring Mankato within one of the Larks, 4-3.

After the Larks scored an insurance run in the top half of the ninth, Nate Boyle (Drury) took the mound and struckout the side to secure the 5-3 win as well as his fourth save of the summer.

Picking up the win was Seth Brewer (Northern State) to improve to 2-2 after h pitched seven shutout innings with seven hits against, a walk and two strikeouts.

Starting on the mound and handed the loss after pitching four and two-thirds of an inning was Weston Lombard (San Francisco). Lombard now stands 0-3 after surrendering four hits and three runs (two earned) while walking one and striking out four along the way.

The MoonDogs rematch the Larks in the series finale Monday for a 6:35 p.m. matchup at ISG Field in Mankato. Nolan Pender (Bellarmine) is listed as the probable starting arm for Mankato.