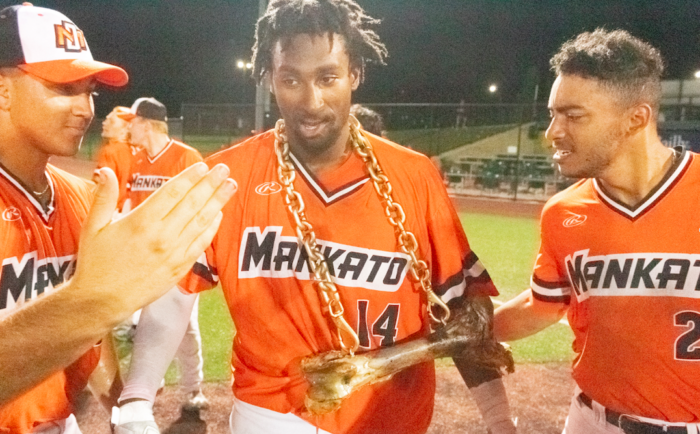 With the win, the MoonDogs snapped a four-game drought and improved to 11-11 while handing the Larks a loss, who now stand 8-12. The field manager for Mankato, Matt Wollenzin, picked up his 100th career victory as well in the MoonDogs’ extra-inning win.

After Simon Gregersen (Des Moines Area CC), now 1-3 after picking up the win, pitched a scoreless top half of the extra inning to keep the game tied, John Newman Jr. (UC Santa Barbara) assumed a spot at second as the potential winning run via the International Tie Breaker rule. After an intentional walk, a groundout to first from Justin DeCriscio (San Diego) that moved both runners up and another intentional free pass, the MoonDogs had the bases loaded with McAdoo up to bat. McAdoo wasted little time capitalizing and swung at the second pitch he saw, which resulted in the game-winning single after it one-hopped the shortstop allowing DeCriscio to score from third for the victory.

The Larks opened the game with a pair of first-inning runs. In the bottom half of the first frame, the MoonDogs wiped the deficit away and then some by scoring five runs all on free passes. The first of the five was scored when DeCriscio was hit by a pitch. The next four MoonDogs’ runs were scored by way of bases-loaded walks.

The Larks then evened the score at 8-8 over the course of the following three innings by scoring twice in the fourth and three times in the sixth. The MoonDogs wasted little time reclaiming a lead when they scored in the bottom half of the sixth. However, in the ninth, the Larks had an answer again in the form of Bradlee Preap’s (Radford) RBI single chopped to third that tied the game, 9-9, and forced extra innings.

Starting on the mound for the MoonDogs, Nolan Pender (Bellarmine) pitched five innings with six hits and five runs (four earned) against. He walked two batters and struck out six others during the non-decisive outing.

The MoonDogs trek to Willmar to take on the Stingers Tuesday at 7:05 p.m. before returning home for four more games. Owen Boerema (Kansas State) is scheduled to pitch for Mankato at Bill Taunton Stadium.