MoonDogs Stave Off Mud Puppies for Walk-Off Win in Mankato 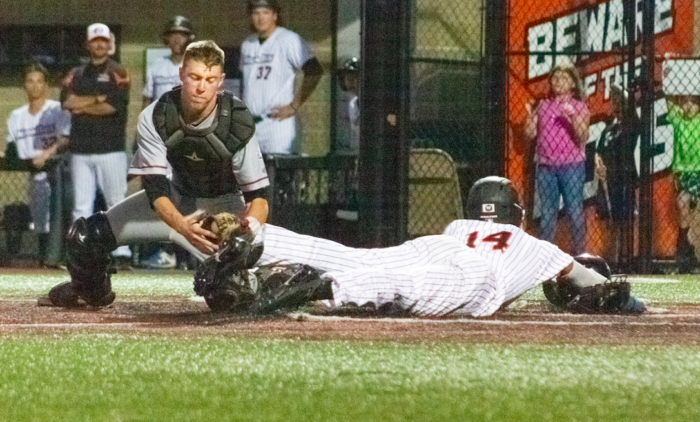 The win, which was the first of MoonDogs’ Field Manager Danny Kneeland’s young career, marked the MoonDogs’ first victory in the second half to improve to 1-2, they now stand 20-17 overall. The Mud Puppies are now 0-3 in the second half and own a 6-14 overall mark this season.

Ninth-inning heroics for the MoonDogs saw Charles McAdoo (San Jose State) lead off the inning with a three-base knock to right-center before he later scored on a high chopper to short by Angelo Peraza (San Diego) for the walk-off winner at ISG Field.

After being named a Northwoods League Great Plains All-Star, Friday morning, Sean Ross (Indiana State) opened the scoring during the third inning when he singled to right to score Orlando Salinas (Kansas State). After the Mud Puppies stranded the bases loaded to avoid further damage, the MoonDogs led 1-0 after three innings in the Key City.

In the bottom of the sixth, Derek Shoen (UMary) led off the inning with a triple and later scored on an RBI single through the left side by Brendan Hord (Evansville). After six innings in Mankato, the MoonDogs led the Mud Puppies, 2-0.

Both sides picked up a run in the eighth. After the Mud Puppies made their way into the score column for the first time, Ross launched a no-doubt solo home run over the fence in left to make it 3-1.

Minnesota tied the game, 3-3, in the top of the ninth on an RBI double by Jackson Hauge (Minnesota State – Mankato) and a single by Noah Dehne (North Dakota State), which made way for Peraza’s game-winning single to score McAdoo during the bottom half. The MoonDogs ultimately walked off the Mud Puppies, 4-3, to snap a three-game skid at ISG Field, Friday night.

Donovan Schultz (Evansville) was dealing for the MoonDogs on Friday night and didn’t surrender a hit until the fifth frame. He finished the night with 6.2 innings pitched and shutout the Mud Puppies while holding them to just a pair of hits with two walks and seven strikeouts along the way. Picking up the win following his first blown save of the summer was Tyson Neighbors (Kansas State). Neighbors now stands 1-1 on the season after surrendering his first earned runs of the season.

The MoonDogs and Mud Puppies rematch in the series finale, Saturday night at 6:35 p.m. Corey Sanchez (San Jose State) is listed as the probable arm to start on the bump for Mankato.