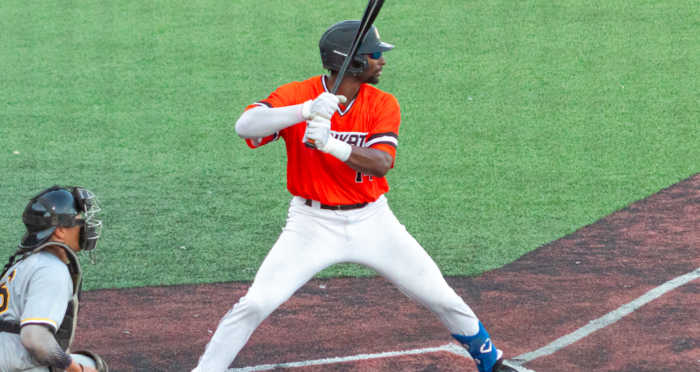 With the win, the MoonDogs have now won three straight games and stand 27-22 overall with an 8-7 mark in the second-half standings. The loss sets the Larks at 16-33 and 5-10 in the second half.

The Larks struck first on one swing of the bat by Luke Glascoe (UC San Diego) that saw the ball out to right for a no-doubt solo home run.

Joel Vaske (Southeast Missouri State) scored his first run as a MoonDog to tie the game, 1-1, when he advanced home from third on a base knock to center by Ariel Armas (San Diego) in the bottom of the fourth inning. After Charles McAdoo (San Jose State) scored on a wild pitch to give the MoonDogs a 2-1 lead during the next at bat, lightning was spotted to make way for a 30-minute delay at ISG Field. The MoonDogs tacked one more run to the lead, making it 3-1, when Kai Roberts (Utah) singled to center after the delay.

Following a second lightning delay before the start of the seventh, McAdoo clubbed in another pair of runs with a bases-loaded single to center. After the seventh inning, the MoonDogs held a 5-1 advantage.

Once the Larks salvaged a pair of runs in the ninth to make it 5-3, Jakob Meyer (Evansville) locked it in on the mound to secure the MoonDogs’ third straight victory.

On the mound for the MoonDogs, Mitch Casperson (Gustavus) pitched four innings of four-hit and one-run baseball before having his debut interrupted by the first lightning delay. He recorded a walk and strikeout. In relief, Miles Garrett (Vanderbilt) picked up his first win to improve to 1-1 after pitching the fifth and sixth with three strikeouts. After pitching the seventh inning, Dalton Mesaris (Western Kentucky) clinched his first save of the summer.

The MoonDogs rematch the Larks Sunday night at ISG Field for the finale at 5:05 p.m.