MoonDogs Take Down Rox in Mankato for Fifth Straight Win 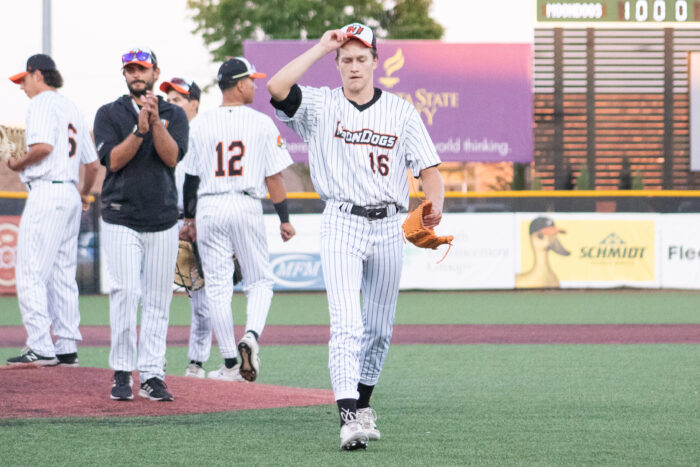 MANKATO, Minn. – The Mankato MoonDogs picked up their fifth win in a row Monday night when they defeated the St. Cloud Rox, 4-1, at ISG Field.

Kai Roberts (Utah) crossed the plate to open the scoring in favor of the MoonDogs Monday night at ISG Field on an RBI single to center hit by Brendan Hord (Evansville). With one inning down and eight to go, the MoonDogs led the Rox 1-0.

The fifth frame saw Charles McAdoo (San Jose State) extend the lead to 2-0 when he doubled off the top of the elevated fence down the leftfield line at ISG Field to score Ariel Armas (San Diego) from second base.

In the sixth inning, Roberts provided insurance in the form of an RBI single to left. After one more MoonDog scored later in the inning thanks to a wild pitch, Mankato found itself grasping a 4-0 lead over St. Cloud.

The Rox grabbed their first run in the eighth courtesy of a passed ball to stave off the MoonDogs’ chance at a shutout. However, the deficit shifted back to four runs, 5-1, in the bottom half of the inning when the Rox’ right fielder fumbled a routine fly ball batted by Roberts that could’ve ended the inning.

The MoonDogs carried the 5-1 advantage through the end of the game to pick up their fifth consecutive victory.

John Lundgren (Illinois), now 3-3, showed out in his seventh and final start of the summer for the MoonDogs. In the outing, Lundgren shutout the Rox over five and a third of an inning while surrendering four hits. Along the way, he walked two hitters and struck out five others.

Following an off-day for the Major League Dreams Showcase at Copeland Park in La Crosse, Wis., the MoonDogs will be in St. Cloud, Minn., Wednesday to wrap up their home-and-home series against the Rox at 7:05 p.m. But first, representing the MoonDogs at the MLDS will be Kai Roberts (Utah), Sean Ross (Indiana State) and Drew Buhr (Bellarmine).