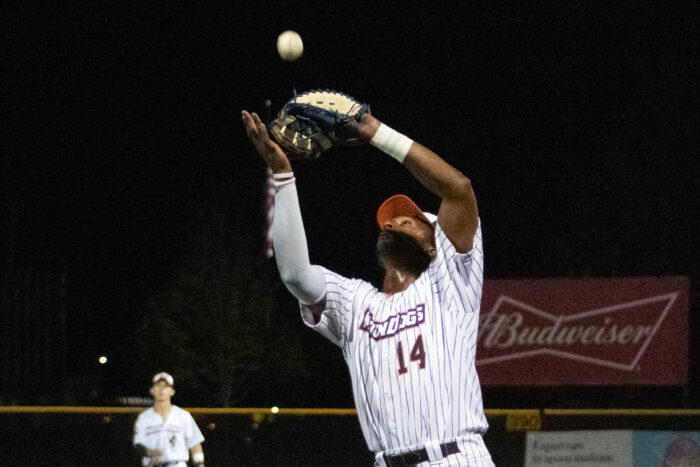 MANKATO, Minn. – The Mankato MoonDogs took down the Rochester Honkers, 6-4, in a come-from-behind effort to pick up their third win in a row, Monday night at ISG Field.

With the victory, the MoonDogs now own a 37-26 overall mark on the season while the Honkers fell to 29-34.

Charles McAdoo (San Jose State) and Owen Little (Southwest Tennessee CC) guided the MoonDogs’ way to victory, respectively. McAdoo went four-for-four in the contest with a double, RBI and the go-ahead run scored in the seventh. Little pitched 5.2 innings of relief work from the second into the seventh with just three hits against, a walk and three strikeouts.

The highlight of Monday’s contest was early offense that went for none as Rochester got off to a hot start by tallying four runs on three hits in the opening frame. However, it was all MoonDogs from that moment on as the Honkers’ bats were blanked the rest of the way.

Mankato had suddenly erased the deficit by the end of the second inning after scoring a run of their own in the bottom half of the first before adding three more in the second to tie the game, 4-4.

Five innings later, in the bottom of the seventh, the MoonDogs gained their edge in the contest over the Honkers. The rally was rolling from the get-go when McAdoo doubled high off the wall in left. In the next at-bat, he scored the go-ahead and eventual game-winning run on an RBI single to center by Brendan Hord (Evansville). Hord scored later on an RBI single to short by Derek Shoen (UMary), which provided insurance in the form of the 6-4 upper hand the MoonDogs rode to victory.

The MoonDogs outhit the Honkers 10-8 in Monday’s ballgame. Both sides had one error in the contest.

On the mound for the MoonDogs, Alfredo Frey (La Verne) picked up the win to move to 1-0 after relieving Little to lead the MoonDogs out of the seventh inning. After also pitching the eighth, Frey finished the night with one hit against and a strikeout. Jakob Meyer (Evansville) entered the game for the ninth and picked up his first save of the summer.

The MoonDogs rematch the Honkers, Tuesday night at 6:35 p.m. back at ISG Field in Mankato.