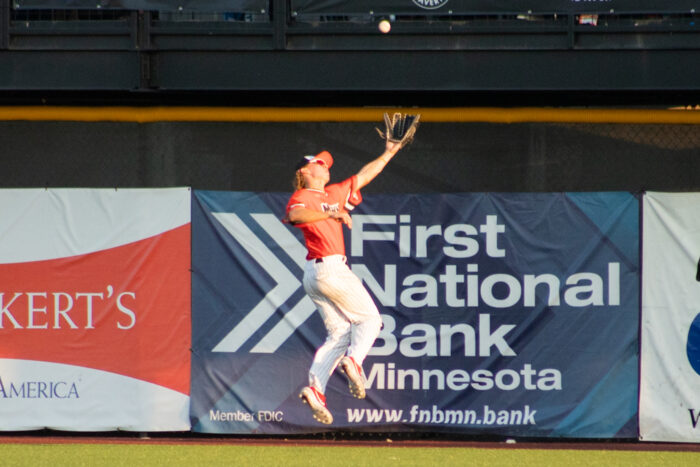 MANKATO, Minn. – The Mankato MoonDogs were defeated, 9-7, by the Eau Claire Express in a Northwoods League baseball game, Wednesday night at ISG Field.

The MoonDogs fell to 38-27 and had their four-game winning streak snapped with the loss. The Express improved to 41-24 picking up the win.

Dustin Crenshaw (Grand Canyon) put on a show Wednesday night for the MoonDogs with the bat. He finished the game sporting a three-for-four line with a grand slam and a double.

Wednesday’s ballgame was a battle with both sides taking turns to score runs in each of the nine innings. There were five total lead changes in the contest, each of which were within the front six innings.

Eau Claire struck first in the first inning and scored four runs, two of which were unearned after defensive errors and miscommunication riddled the MoonDogs in the field. After the MoonDogs entered the score column with a run in the second, the Express grasped a 4-1 lead.

Crenshaw handed Mankato the lead in the following inning with one swing of the bat. With the bases loaded, Crenshaw sent his second blast of the season into orbit at ISG Field. Once the ball landed on top of the Doghouse Suites behind the right field fence at ISG Field, the MoonDogs led the Express 5-4.

The MoonDogs were tasked with reclaiming the lead after the Express tied the game in the fourth to make it 5-5. By scoring a run in the fifth, the MoonDogs took back the lead, 6-5.

The Express continued the back-and-forth battle into the sixth and seventh innings, scoring a run in both frames to retake a one-run advantage, 7-6.

In the eighth, the Express ran away with the contest by scoring another pair of runs to extend the lead to 9-6.

The MoonDogs mounted a rally in the ninth that saw Ariel Armas (San Diego) score from third on a wild pitch. However, after a pair of Dogs moved into scoring position, Mankato was held in check as Matt Helwig (Lewis) escaped the jam on the hill to secure a 9-7 victory for his ninth save of the summer.

Picking up the win for the Express was Will Rizzo (Texas A&M), now 2-1, while Chris Baytosh (Cal Poly) secured his first hold of the summer.

Starting on the mound for the MoonDogs, Mitchel Casperson (Gustavus) pitched into the fifth inning allowing nine hits and five runs (three earned) with a walk and strikeout before being relieved by his college teammate Brevin Goetz (Gustavus). In relief, Goetz worked from the sixth into the eighth and was handed the loss to fall to 0-1 after he surrendered four runs in the outing.

Up next, the MoonDogs rematch the Express in their final home game of the 2022 campaign, Thursday night at 6:35 p.m.