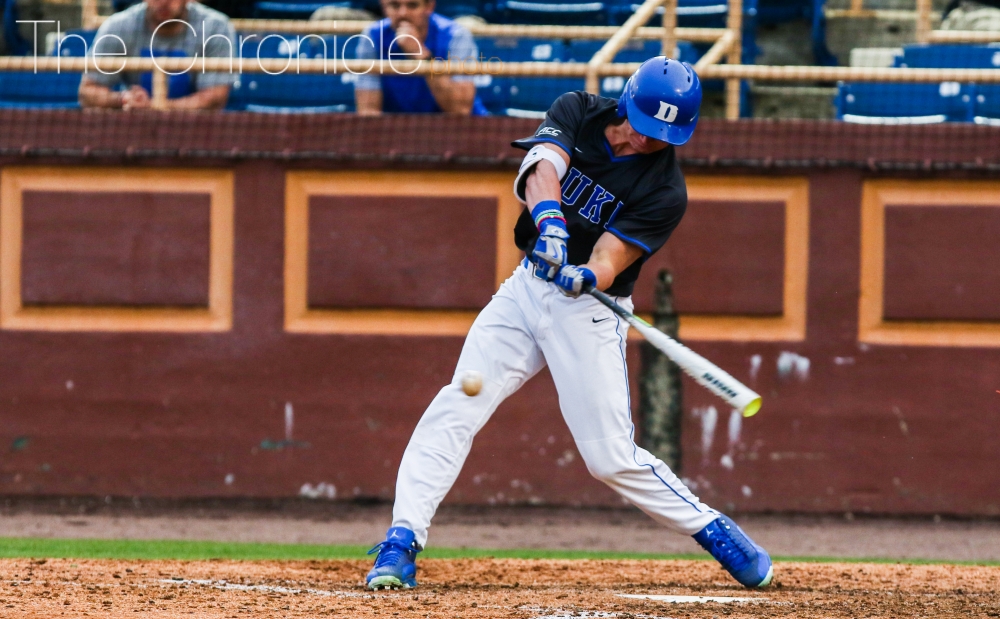 Photo by Jack Dolgin | The Chronicle

Griffin Conine leads the Blue Devils in every major offensive category in his first year as a regular starter.

With a little less than a third of the season remaining, the Blue Devils’ chances of qualifying for their second consecutive NCAA tournament berth for the first time since 1957 are dwindling away by the day.

But amid all the inconsistency and adversity Duke has faced so far this season, the Blue Devils have found a new leader offensively in sophomore Griffin Conine. 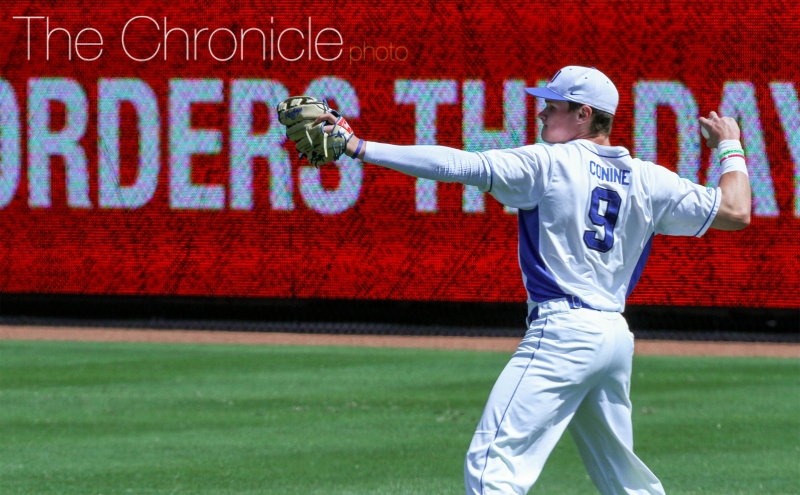 By Mitchell Gladstone / The Chronicle

Conine learned the game from his father Jeff, who had a 17-year major-league career and won two World Series rings.

Conine hit a mere .205 and drove in six runs in limited playing time last season, but has emerged on the scene during a breakout 2017 season. The Weston, Fla., native currently leads Duke in batting average, hits, runs, triples, home runs, RBIs and walks. Conine is playing with a newfound level of confidence and is locked in mentally at the plate thanks in part to his experience last summer. As a member of the La Crosse Loggers in Wisconsin, he led the Northwoods League with 16 home runs.

“I sort of was all over the place last year mentally, and I did not have a lot of confidence coming in,” Conine said. “I would say also another thing was going to Northwoods this past summer in Wisconsin. I got to play almost 60 games out there, I got used to being out there every day and getting into a rhythm. I think going into fall, that gave me a whole new outlook on the year.”

Conine’s recent improvement and new outlook continue to open eyes as people wonder if his ceiling can be as high as his father’s.

Jeff Conine played in the Major Leagues for six different teams from 1990 until his retirement in 2007, and is mostly known for his stints with the Baltimore Orioles and Florida Marlins, now renamed the Miami Marlins. He was a two-time All-Star and earned two World Series championship rings in 1997 and 2003 with the Marlins.

Despite such an outstanding career by his father, Griffin feels very little pressure to live up to his legacy.

“My dad is a pretty hands-off, laid-back type of guy,” Griffin said. “He was really good about taking a step back and letting me figure it out on my own, what I wanted to do, and that’s something that normally surprises a lot of people. But he’s a pretty laid-back guy, so I never really feel any pressure.”

Although Jeff never pushed baseball on Griffin, Jeff has been essential to helping him think about the game mentally, and is always willing to help out his son however he may need.

Jeff’s fatherly advice and Griffin’s experiences hanging around his father on the field or in the dugout when he was a kid have helped shape the way he goes about his life and plays baseball.

“One of the best things he tells me is that it’s a game of failure,” Griffin said. “It’s a game where you strive to be successful three times out of 10, and that’s like the best players in the game who are only successful three times of 10. You have to learn to accept the failure that you are going to face and deal with it in a way that can help you and be constructive.”

Griffin has certainly adapted this new mentality and is among the best in the ACC with his .338 batting average. He also ranks fourth in the conference with 46 RBIs and is tied for fifth with 11 home runs. The 6-foot-1 right fielder was named a second-team Perfect Game/Rawlings Midseason All-American two weeks ago and has since continued his impressive play.

In the Blue Devils’ recent trip to play Miami, Griffin shined close to home, belting a home run in the first game of the series after Jeff gave the team a tour of Marlins Park prior to the series.

Last Wednesday against Campbell, Griffin hit two home runs in a wild 12-10 win, and he also hit a three-run shot in Saturday’s loss against Boston College before going 3-for-3 with two walks in the series finale Sunday.

And after Duke’s season ends this spring, Griffin will play for the Cotuit Kettleers in the highly-regarded Cape Cod League in the summer.

Only a sophomore, those around him are beginning to wonder how much higher his draft stock can rise and when he will make the jump to the pros to follow in his father’s footsteps. Griffin was drafted by the Marlins in the 31st round of the MLB Draft in 2015, but elected to go to college instead. That decision seems to be paying dividends, and Duke is guaranteed to reap the benefits until at least the end of next season, when Griffin will have the option to re-enter the draft as a junior.

“It’s been fun to watch, particularly when you think about how much he’s grown in just one year,” Blue Devil head coach Chris Pollard said. “To compare him to where he was this time last year and see that growth and maturation that has happened over these last 12 months, to think about that moving forward, he’s got a really high ceiling.”