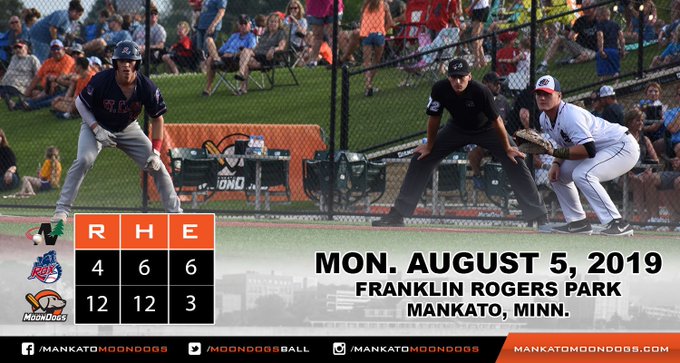 Mankato, Minn. – The Mankato MoonDogs won game one of their three-day, two-game series with the St. Cloud Rox on Monday. Solid offense and efficient pitching led the Dogs to an 12-4 victory and their 4th straight win.

The MoonDogs struck first when Sean Ross (Pensacola) roped a single to give the Dogs an early 1-0 lead.

Mankato added to their lead in the third. Damon Maynard (Olney Central CC) wore a pitch with the bases loaded and it allowed Tanner Craig (Evansville) to coast in for the score. It upped the Dogs lead to two after three at The Frank.

The lead progressed rapidly in the fourth when Mankato added seven to their already unanswered lead. Five hits and an error helped guide the offense. A single by James Gargano (Butler) was the lone multi-run knock of the inning, it plated Craig and Maynard. The score was 9-0 through four in Mankato.

St. Cloud got on the board with a trio of runs in the next frame. Hance Smith (California – Berkeley) plated a pair with help from a defensive miscue to make it 9-3 Mankato.

After the Rox added another run in the sixth, the Dogs scored another pair in response during the bottom half. More defensive miscues scored the first and were followed up by a Cuba Bess (Grand Canyon) RBI single for the second tally.

The final run for the MoonDogs came in the eighth with Gargano tallying another RBI. Again it was due to defensive miscues on the Rox defensive side, they totaled six errors on the night. The MoonDogs wrapped things up with their starter, Jaxon Passino (Kansas State), closing out a complete-game win in the ninth for a 12-4 final at The Frank.

Ross was the go-to offensive player of the night for Mankato. He finished the night 3-5 with a pair of RBI and two runs scored in the game.

The win was well earned for Passino as he worked through the final frame to notch his first complete-game for the Dogs this summer. He six hits and four runs (one earned). Passino also walked two and struck out four.

The loss went to the Rox starter, Zach Lauzon (Concordia – St. Paul), he went three innings and gave up a pair of runs. He was hit off five times, surrendered three walks and struck out three as well.

On Wednesday, The Mankato MoonDogs (33-34) take on the St. Cloud Rox (42-24) again for the finale of the three-day, two-game series in Mankato, Minn. Conner Campbell (Lander) is the scheduled probable arm for the Dogs. First pitch is set for 6:35 p.m. at Franklin Rogers Park.