Campbell and the MoonDogs Complete Sweep of the Rox Wednesday 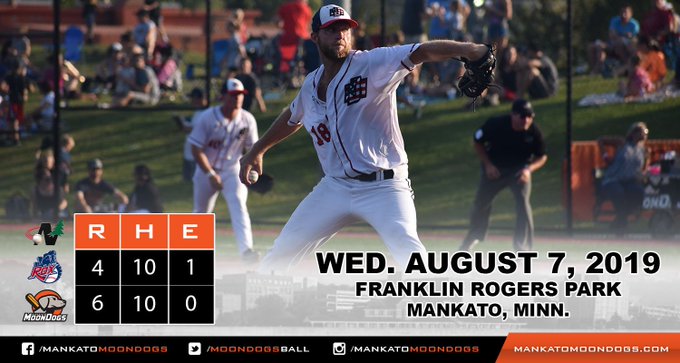 Mankato, Minn. – The Mankato MoonDogs thrived off excellent pitching and a five-run fourth frame to upset the St. Cloud Rox 6-4 on Wednesday. It was a sweep, and a big one, for the MoonDogs as they took down the division’s second half leaders.

The MoonDogs scoring started in the fourth when Mankato scored five. Sean Ross (Pensacola) got it started with an RBI single that plated Mikey Perez (UCLA). Then Dayton Dooney (Arizona) blasted his 2nd home run of the season, a two-run shot, to make it 3-0. Tanner Craig (Evansville) also put on a display of power a batter later. The solo home run made it a 4-0 advantage. Garrett Gilbert (Creighton) scored on an RBI single hit by Nick Novak (Angelo State) to round out the inning at a 5-0 score.

The Dogs added one more to their unanswered lead in the fifth. Dooney batted in his 3rd RBI with a sacrifice fly to right field. The score was then 6-0 in favor of Mankato through five at The Frank.

The seventh was a whirlwind defensively for the Dogs. The Rox scored four after the Dogs nearly escaped the inning with no damage done, but the potentially inning-ending double play went for only one out. St. Cloud then capitalized on the miscue and scored three more after one scored on the previous play. Garett Delano (Brown) scored the first pair with an RBI single. In the next at bat, Jack Kelly (Minnesota) drove in their final run with a two bagger to score Delano. Mankato held a 6-4 lead after the seventh came to a close.

Jack Pilcher (Butler) turned off the lights with a solid final two frames of work to secure a 6-4 win and series sweep of the St. Cloud Rox at The Frank on Wednesday.

Ross had a night for the Dogs, he went 2-4 with a run scored and the RBI that got the scoring started.

Conner Campbell (Lander) notched his 3rd win of the summer for the MoonDogs on Wednesday evening. He pitched a solid 6.1 innings before being relieved by Jesse Parker (Lewis-Clark State College) in the seventh. Campbell then had two runs he was responsible for score as a part of the Rox four-run rally in the seventh. Other than the two runs he surrendered, he gave up seven hits, struck out six and walked a pair en route to the win. Pilcher cruised through the final two frames for the win. Aside from walking one, he struck out a pair in each of the innings he was responsible for to notch his 3rd save of the year.

Tomorrow the Mankato MoonDogs (34-34) are back at The Frank to play host to the Willmar Stingers (38-29). The southpaw veteran, Brett Newberg (Austin Peay), is scheduled to do the Dogs pitching. He will begin work with the game’s first pitch at 7:05 p.m. at Franklin Rogers Park in Mankato, Minn.